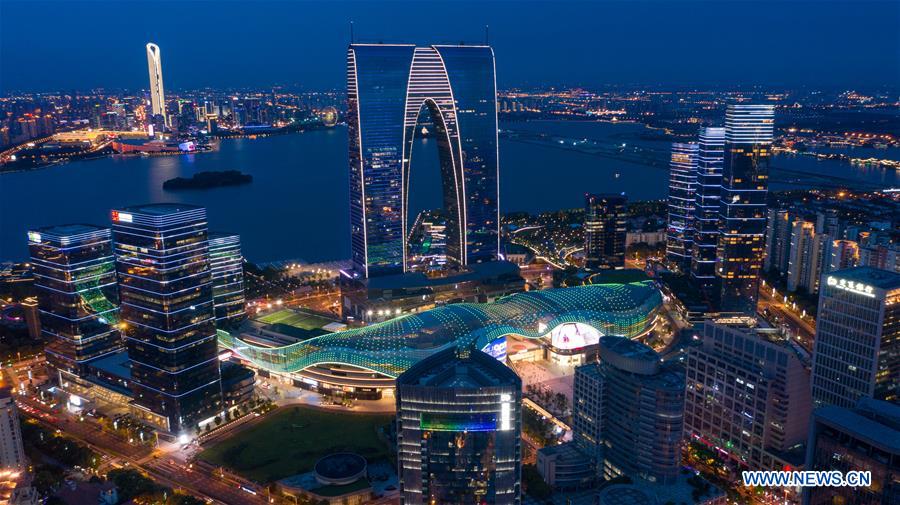 The China Integrated City Index 2020, compiled by Cloud River Urban Research Institute, was released on Dec. 28, 2021. Looking back on the year of 2020, despite hard blows by the coronavirus sweeping the world and the deep recession of global economy, the united Chinese people and resilient Chinese cities made major achievements in epidemic prevention and control across the country and in economic and social development. In this context, the China Integrated City Index 2020 makes an objective evaluation of the COVID-19 response and the economic recovery of 297 Chinese cities at and above the prefecture level based on multi-dimensional data. The findings from the comparison of indexes before and after the outbreak are as follows.

The cities maintain stable momentum of development. The comprehensive ranking of the China Integrated City Index 2020 analyzes and evaluates the development of the cities from three dimensions of environment, economy, and society. The top 30 cities in the ranking are basically unchanged from 2019, except that Wuhan drops from the top 10 to 11th and Suzhou makes the top 10. The combined GDP of these 30 cities accounted for 43% of the national total, a main force driving China's economic growth. Although China's economy once hit the "pause button" due to the severe impact of COVID-19, none of these 30 cities located in China's fast-developing areas mark drastic ups and downs. Instead, they maintained sound momentum of development and played an important role as the locomotive of China's development.

The cities make continuous improvements in the environment. Rankings in the environment dimension reflect the changes in the cities' natural ecology, environmental quality, and spatial structure. Compared with 2019, the top 30 cities in the 2020 environment ranking have not changed much — Naqu rose from 33rd to 22nd, Quanzhou from 35th to 28th, and Zhongshan from 36th to 29th, while Suzhou, Baoshan, and Sanming fell out of the top 30. With the view of peaking carbon emissions and achieving carbon neutrality, all the cities have been adjusting industrial structure, optimizing spatial layout, and promoting green development while overcoming the impact of COVID-19, and as a result, the top cities could be overtaken in the ranking at any time. Thanks to their effective efforts to improve the environment, the eco-environment of the country improved in general.

The cities make steady steps forward in governance. Rankings in the society dimension demonstrate the cities' influence, governance level, and life quality. Although major epidemic outbreaks tend to pose severe challenges to urban governance, the top 30 cities in the 2020 society ranking have not changed much compared with 2019 — Zhuhai drops from 23rd to 31st, and Nanchang climbs from 33rd to 25th, ranking among the top 30. In fact, local governments actively took measures against COVID-19 amid the outbreak, and quickly brought the life of urban residents back to normal after it was temporarily affected. Despite unsatisfactory aspects in governance amid the outbreak, the cities withstood the test, with their status, urban culture, and life quality not greatly affected.

The cities sustain stable economic performance. Rankings in the economy dimension show not only their economic aggregate, but also their economic structure and efficiency. Compared with 2019, the top 30 cities in the 2020 economy ranking have barely changed, except that Zhuhai falls from 30th to 32nd and Wenzhou rises from 31st to 28th. It shows that Chinese cities have effectively addressed the impact of COVID-19 and maintained stable economic performance. China has already entered a stage of economic restructuring, transformation, and upgrading, and COVID-19 has accelerated its pace in this regard and in fostering a new development paradigm with domestic circulation as the mainstay and domestic and international circulations reinforcing each other, of which all the cities will be an integrate part. 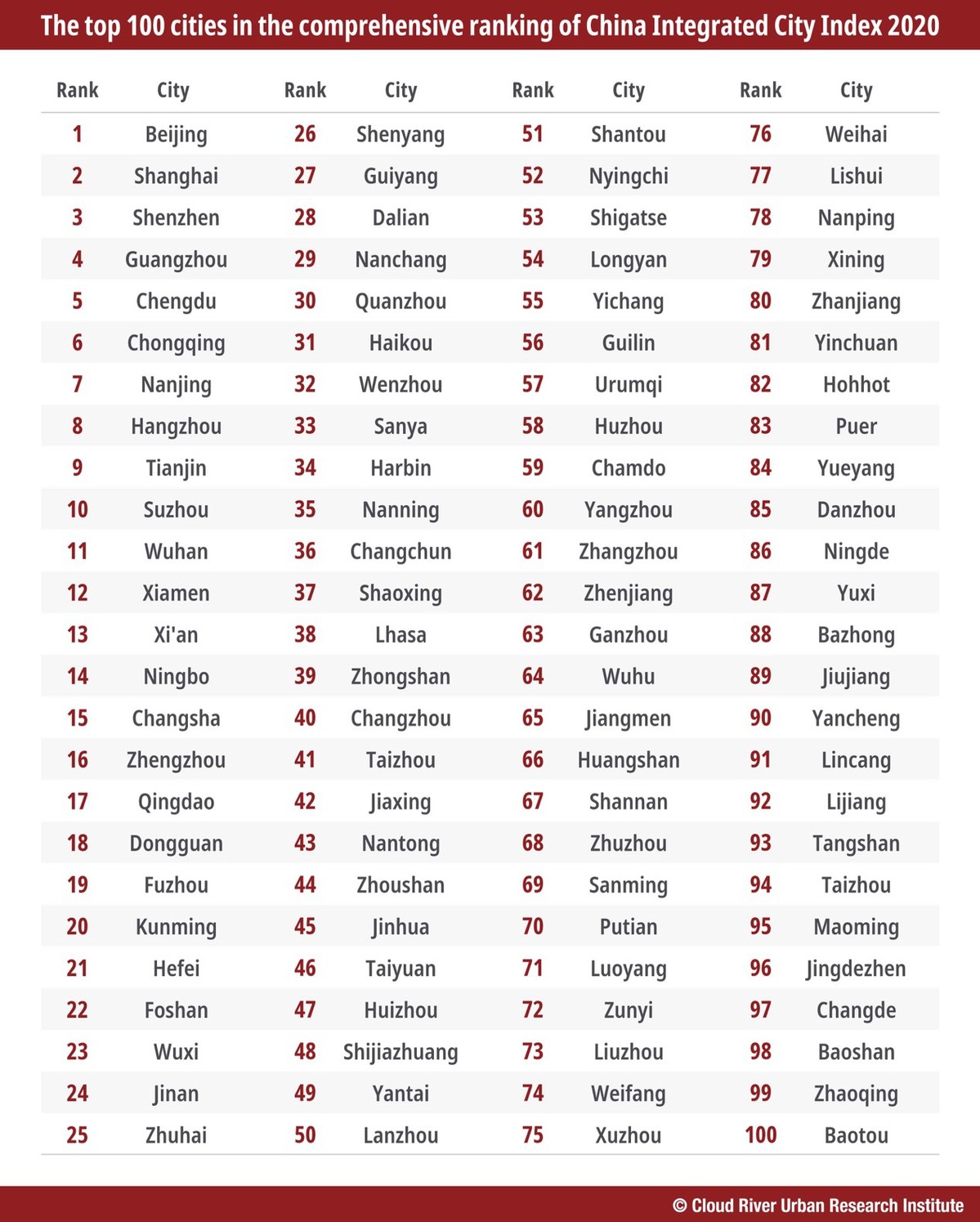 The cities show strong resilience. The top 10 cities in terms of COVID-19 cases in 2020 are Wuhan and its neighboring cities that were hard hit by the sudden outbreak of the epidemic. These cities succeeded in curbing the spread of the virus in little more than one month, kept the local daily new cases within single digits in about two months, and won a decisive victory in the fight against the virus in about three months. The top 10 cities in terms of GDP, including Shanghai, Beijing, Shenzhen, Guangzhou, Chengdu, Chongqing, and Hangzhou, are in 11th to 20th places in the ranking. Harbin, Changsha, Nanchang, Hefei, Urumqi, Ningbo, Wenzhou, Bengbu, Nanyang and other provincial capital cities and local economic central cities also make their way into the list. Some cities have been hit by multiple rounds of outbreaks. Among these cities, by measure of medical radiation, Xiaogan, Huanggang, Suizhou, Xinyang and Nanyang are placed after 200, Jingzhou, Ezhou, Xiangyang, Huangshi, Jingmen and Xianning rank 100-200, and Beijing, Chengdu, Shanghai, Guangzhou, Hangzhou and Wuhan are in the top six. Under the unified direction of the central government, cities with strong medical resources supported cities with weak medical resources. All cities implemented category-based and science-based prevention and control measures, and resumed work and production in an orderly way, soon putting the economy on a stable footing and bringing businesses and lives into normal state. China has become the first major economy to return to growth since the outbreak of the virus, leading the world in the fight against COVID-19 and economic recovery, and showing the strong repair capacity and vitality of Chinese cities.

Transportation and logistics develop in a coordinated way. The top 10 cities in terms of passenger throughput are almost the same as the top 10 cities in terms of cargo throughput. As the main hub cities of transportation and logistics in China, these 10 cities account for 45% and 72.8% of the country's passenger throughput and cargo throughput, respectively. The top 10 cities in 2020 in terms of port container throughput are Shanghai, Ningbo, Shenzhen, Guangzhou, Qingdao, Tianjin, Xiamen, Suzhou, Yingkou, and Dalian, which account for 70.8% of the country's port container throughput. As the epidemic disrupted the production of enterprises, major cities actively carried out multimodal transport to ensure smooth transportation of emergency supplies. According to the data of the Ministry of Transport, the cargo throughput of ports across the country was14.55 billion tons in 2020, an increase of 4.3% over the previous year. Specifically, container combined rail-water transportation completed 6.87 million TEU, an increase of 29.6%, helping to stabilize foreign trade and industrial chain supply chains.

The digital economy develops rapidly. The top 10 cities in terms of IT radiation in 2020 are Beijing, Shanghai, Shenzhen, Hangzhou, Guangzhou, Chengdu, Nanjing, Fuzhou, Wuhan, and Xiamen. These cities are located in the most prosperous areas in China and are home to a number of IT companies, IT employees, and good IT infrastructures. With offline circulation restricted by the epidemic, new business forms such as online shopping, remote office, video conference and cloud exhibition in these cities have emerged rapidly thanks to new infrastructure and rich IT human resources. Thus their digital economy has made great progress, driving the digital transformation of China's industrial economy. Online shopping has boosted social retail consumption, and cross-border e-commerce has propped up foreign trade. According to the data of the National Bureau of Statistics, the national online retail sales raked in 11.76 trillion yuan in 2020, an increase of 10.9% over the previous year. Specifically, online retail sales of physical goods reached 9,759 billion yuan, an increase of 14.8%, accounting for 24.9% of the total retail sales of social consumer goods, an increase of 4.2 percentage points over the same period last year. According to the data of the General Administration of Customs, China's cross-border e-commerce foreign trade expanded by 31.1% in 2020, including exports of 1.12 trillion yuan, an increase of 40.1%, and imports of 0.57 trillion yuan, an increase of 16.5%. Despite uncertainties brought by the pandemic, cross-border e-commerce is becoming an important force to bolster foreign trade.

Ming Xiaodong is former first-level inspector of the Department of Development Planning of the National Development and Reform Commission and former minister-counsellor of the Chinese Embassy in Japan.