By HE YUN | China Daily 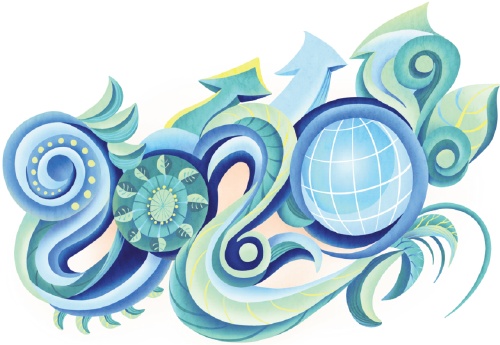 This year marks the final year of the 2020 EU-China Strategic Agenda for Cooperation. It is also the year in which China will draw up its 14th Five-Year Plan (2021-25) and in which the European Union has finalized its new multi-year financial budget. For both countries, these occasions offer unique opportunities to shape their domestic long-term climate policy as well as bilateral climate cooperation. The EU and China should join hands to assume international climate leadership and create new momentum to drive global emissions reduction.

Climate change has become a key priority for the EU leadership. In December 2019, the newly appointed European Commission introduced a "Green Deal" with the goal of transforming the European economy in order to realize regional carbon neutrality by 2050. In March this year, this goal was included in a draft of the European Climate Law published by the European Commission. If passed, this will be the first time in history that the goal of carbon neutrality is written into law.

In response to the novel coronavirus outbreak, the EU has agreed an economic stimulus plan of 750 billion euros ($885 billion), of which around one-third is allocated for climate-related actions.

China has also taken great steps in seeking to transform its economy to one that is focused on innovation and sustainable development. In 2018 alone, China accounted for 32 percent of all global renewable energy investment. Today it has the largest installed capacity of hydropower, solar power and wind power. One in three wind turbines in the world is located in China. It is the largest market for electric vehicles, and home to close to half of the world's electric cars, half of all charging infrastructure and 99 percent of the world's electric buses.

In addition, the development of green technology is one of the top priorities for China's high-tech sector. In this year's Government Work Report, expanding renewable energy R&D and consumption, advancing 5G and the digital economy, promoting electric vehicles and protecting and restoring key ecosystems are included as key elements of the coronavirus recovery road map that offer both high short-term economic impacts and long-term climate benefits. It is expected that these elements will also be included in the 14th Five Year Plan.

But China and the EU can do more together. In May, German Chancellor Angela Merkel stated in a speech at a Konrad Adenauer Foundation conference that promoting China-EU climate cooperation is one of the main goals of the German presidency of the Council of the EU. A similar sentiment was expressed by Chinese President Xi Jinping and European Commission President Ursula von der Leyen in a videoconference on June 22, where they spoke of their willingness to strengthen cooperation on climate change actions and sustainable development.

Since the United States announced its withdrawal from the Paris Agreement in June 2017, there has been a leadership vacuum in the international climate movement. Not only has US withdrawal widened the funding gap needed to tackle climate change, it has also set a bad example for big emitters such as Brazil and Australia, which have shown signs of an increasing unwillingness to participate in global climate efforts. This new trend has prompted the United Nations secretary-general to warn that "we are currently way off track from meeting either the 1.5 C or 2 C targets that the Paris Agreement calls for", referring to the commitment made by countries to keep global average temperatures well below 2 C above pre-industrial levels. EU-China cooperation could be the key to turn this tide.

According to the Paris Agreement reached in 2015, global mitigation progress will be evaluated every five years and countries must decide whether to revise their national mitigation contribution (nationally determined contributions). This was due to take place at COP26, originally scheduled for November 2020 in Glasgow, Scotland, but this has been delayed to next year due to the coronavirus outbreak. An EU-China climate consensus reached before the meeting could greatly boost countries' confidence in the Paris Agreement, bridge the gap between developed countries and developing countries, and drive the global climate movement significantly forward.

EU-China climate cooperation also makes economic sense. The EU's Green Deal proposes to achieve net zero emissions in the power industry by 2040 and set up goals to triple its current pace of building renovation. This could be a good opportunity for Chinese companies to invest in clean energy in the EU and opens the possibility for mutual learning and cooperation in carbon neutral construction. The carbon border adjustment mechanism proposed by the Green Deal, on the other hand, may increase the cost of China's exports to the EU. The two parties need to hold frank dialogues and coordinate carefully in order to prevent such policies from becoming new tariff barriers to bilateral trade.

Politically, as the US increasingly turns to unilateralism and covertly or openly undermines the international system it has helped to build, the EU and China need to work closely together to keep the multilateral order from falling apart. Climate is an area in which both parties can demonstrate their commitment to multilateralism.

Climate cooperation could also expand common interests and build trust between China and the EU. As strategic competition takes center stage in Sino-US relations, it is in both China and the EU's interests that Europe maintains its impartiality. However, recently some EU member states have taken unfavorable positions against China on the issue of national security legislation for the Hong Kong special administrative region and 5G, indicating that China-EU relations have reached a crossroad. Strengthening bilateral cooperation on climate change and pushing for the successful conclusion of the Bilateral Investment Treaty would help to build trust and increase mutual dependency, which would also play a positive role in preventing the world from sliding once again into a Cold War.

The author is an assistant professor at the School of Public Administration at Hunan University. The author contributed this article to China Watch, a think tank powered by China Daily. The views do not necessarily reflect those of China Daily.