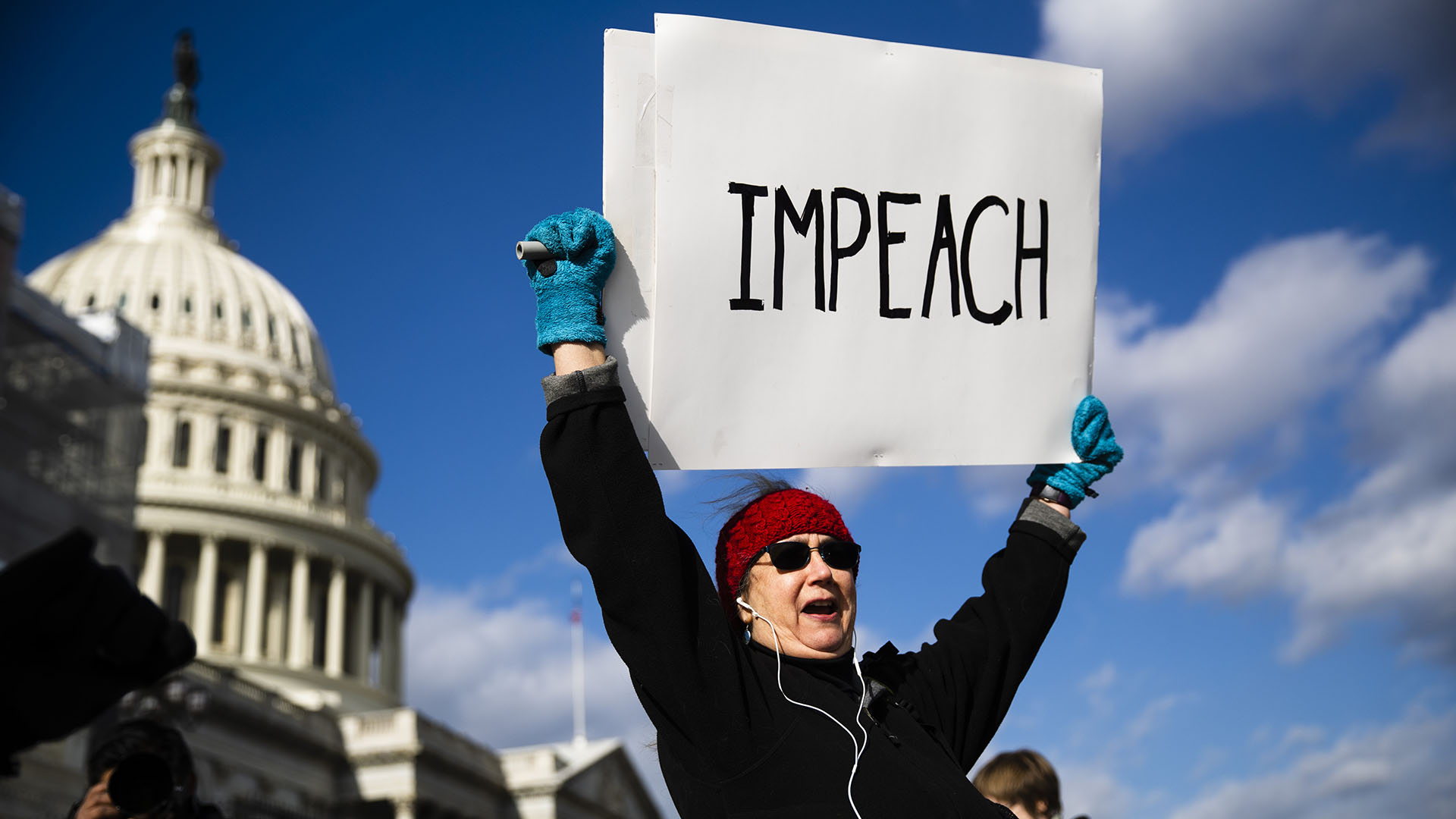 Protesters demonstrate as the House of Representatives debates on the articles of impeachment against President Donald Trump at the US Capitol building, Wednesday, December 18, 2019, on Capitol Hill in Washington. (Photo: AP)

In a historic vote, Donald Trump has officially become the third president, after Andrew Johnson and Bill Clinton to be impeached in US history. The U.S. House of Representatives voted in favor of two articles of impeachment: abuse of power and obstruction of Congress.

The results did not surprise anyone given a Democrats-controlled House. But still, it is a signature move in an increasingly white-hot partisan competition for power. Nancy Pelosi has only a few steps to go to get Trump out of the office: name a group of "impeachment managers" and transfer the case to the Senate. A trial is expected in January next year and a two-thirds majority is needed to remove Trump from Presidency officially.

We are most likely not going to see a surprising vote given the Republican's 53-seat majority. So even if Pelosi announced she would put off transfer of the case for now to make sure the trial procedures are fairer, it is highly unlikely that Trump would be impeached given Senate Majority Leader Mitch McConnell's remarks that he would not be an "impartial juror" at all.

The Democrats must have done the math beforehand and knew that the chance was too small. Most likely, they still would like to see Trump's approval rate dragged down, as more evidence is revealed, thus leaving more winning chances for the Democrats in the 2020 election. The Mueller investigation has already hit Trump's approval and damaged his public image. The Democrat is hoping that the Ukrainegate scandal could give those swing voters a final push to change their minds.

But again, one must be careful not to fiddle with public opinion as it could easily backfire. What the Democrats have hoped to "kill" Trump might in turn makes him stronger politically.  A CNN poll in December showed that support for impeaching Trump has reduced to 45 percent, down from 50 percent in mid-November. The country largely remained evenly split on the impeachment. The Gallup poll also showed that Trump's approval rate has actually climbed up six percent from 39 percent to 45 percent since Pelosi formally opened an impeachment inquiry in September.

To be fair, Trump's performance on the approval rating has been mostly negative. Still, these numbers have at least demonstrated that there is not much in the public opinion regarding the impeachment. The impeachment drama, which started the day after Trump's presidency, may have prolonged to the point where most have lost interest. More importantly, the Democrats have chosen the wrong theme when crafting the plot.

It is not that the alleged accusation of Russian interference and Trump's possible abuse power in Ukrainegate is not serious; it is just that to woo ordinary Americans, foreign affairs are never as attractive compared to domestic matters such as employment, wages and health care. And judging from the poll, at least the public does not think the matter is serious enough to get Trump out of the office.

During his impeachment crisis, Bill Clinton received a high approval rating of 73 percent in 1989. According to a CNN poll in 2006, 63 percent of respondents say that Clinton did a better job handling the economy than his successor Bush (26 percent). In the same period, Americans expressed a high level of satisfaction with the country's economy and general situation.

Clinton's survival shed some important light on the current issue: that as long as the economy is going up and people are positive with how things are going on in the country, people can tolerate some character flaws of the President as long as he is doing his job.

With the just concluded phase one China-U.S. trade deal and USMCA, as well as positive signals in the manufacturing and housing market, Trump could easily play the victim card as the cornered President who has been doing the real job, while the Democrats are busy engaging in partisan politics.  "It's the economy, stupid!" Bill Clinton has already revealed the secret of how to win American people's favor.