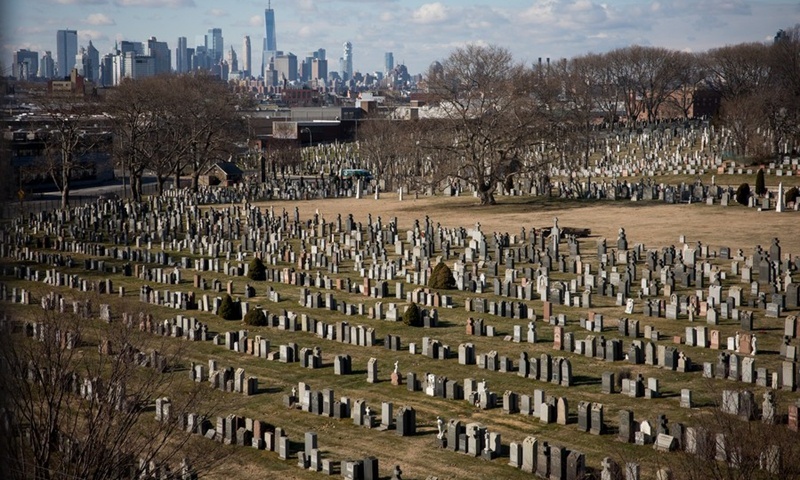 The Manhattan skyline is seen behind Calvary Cemetery in New York, the United States, on Jan. 18, 2021.(Photo: Xinhua)

China has successfully put waves of COVID-19 under control, while the US media cannot control their opinion war on China. In another recent faultfinding article titled "The truthtellers," CNN listed the people, "who shared details of the COVID-19 pandemic that Beijing left out". The outlet then accused, as it always does, China of concealing the initial outbreak in Wuhan, and cracking down on so-called citizen journalists.

For quite a long time, the US media have had no new hook to point its accusing fingers at China. The CNN article was just heating up what had been left over. When Dr. Li Wenliang, who was among the first to warn of the deadly novel coronavirus, died of the virus, and when "citizen journalist" Zhang Zhan who covered Wuhan's epidemic outbreak was sentenced to four years, the eyes of US media like CNN sparkled - because they believed they found new tools to assault and shame China.

In their eyes, these people are tools to confront China. Their lives and rights are not something the US media really care about. The US media even didn't shed a single tear over the lives of the more than 500,000 Americans who have died in the pandemic because of the inability of their government. How could one expect that they really have sympathy for even a few Chinese people?

One year into the pandemic, the only thing that Western media can do is to continue to help their government shift blame onto others. The failure of the US under the coronavirus pandemic is the biggest stain for the US media elite who are proud of the country to the point of arrogance.

They see no hope for the current US society to heal from its pathology. So they only carp about China. In order to maintain the sensation and appeal of their media war against China, the US media have to change their gimmicks and make up new stories about China. Statements like "concealing the epidemic" and "political suppression" go the best with the long-term goal of shaping of China's image by Western public opinion in the US.

No matter how erroneous the content is, it can deceive the West for some time. This is the easiest and cheapest card the Western media can play to attack China.

Since the COVID-19 pandemic, the US has had many tools for spreading rumors. In addition to the former president, secretary of state and congressmen, US media have also played a role in fueling these flames. With the support of the Five Eyes alliance and other allies, the West has formed a group of forces linked by political interests and the values system and constantly mobilized themselves.

Inside this group, there are only clichés and conspiracy theories. They don't show the slightest respect for facts, science and morality. The US media have cooperated with politicians to engage in internal political struggles and their national competition worldwide.

Such politicization of the COVID-19 fight has prevented US society from concentrating on fighting the virus at home. As a result, science has given way to politics and the international struggle has taken precedence over international cooperation. Political calculations override everything: if this is the US' logic in the COVID-19 fight, then values overriding everything should be seen as indicators of the American media's public opinion about China.

US media like CNN actively cater to readers' ideology and value orientations, even at the expense of the principle of being authentic and objective. These media try to attract people's attention by hyping up conflict. They concoct irritating and dramatic information. In the US and Western society, conservatism and populism are increasing. The epidemic situation has not been improved and their economies are suffering from regression. Under such circumstances, hyping China's negative COVID-19 issues and catering to domestic xenophobic public opinion have become a handy tool for some Western media to attract people's attention.

China's initial response to the epidemic was limited by a lack of understanding about the virus and fears of causing public panic to an unknown disease. The delayed response has been widely criticized by Chinese media and public. But Chinese society did not descend into a war of words or shift-blaming. It mobilized in a collective manner to fight the epidemic.

At the same time, China has enhanced its transparency during this process. It worked with the World Health Organization with an earnest manner and allowed it to do field research and probe the origins of the virus in China.

Nonetheless, the US media did not face squarely with WHO investigations that reported that the coronavirus was unlikely to have leaked from a Chinese lab. They hold a sour grapes mentality toward China's successful fight against the virus, and the smooth transition to work and production resumption. What they can only do is numb themselves and repeat lies hysterically and tirelessly.

China cannot wake up someone who pretends to be sleeping. In face of China's epidemic control success, the Western media can only pretend to be sleeping.