OPINIONS Cold-shouldered by US, will Canberra learn a lesson and handle international ties like grown-ups?

Cold-shouldered by US, will Canberra learn a lesson and handle international ties like grown-ups? 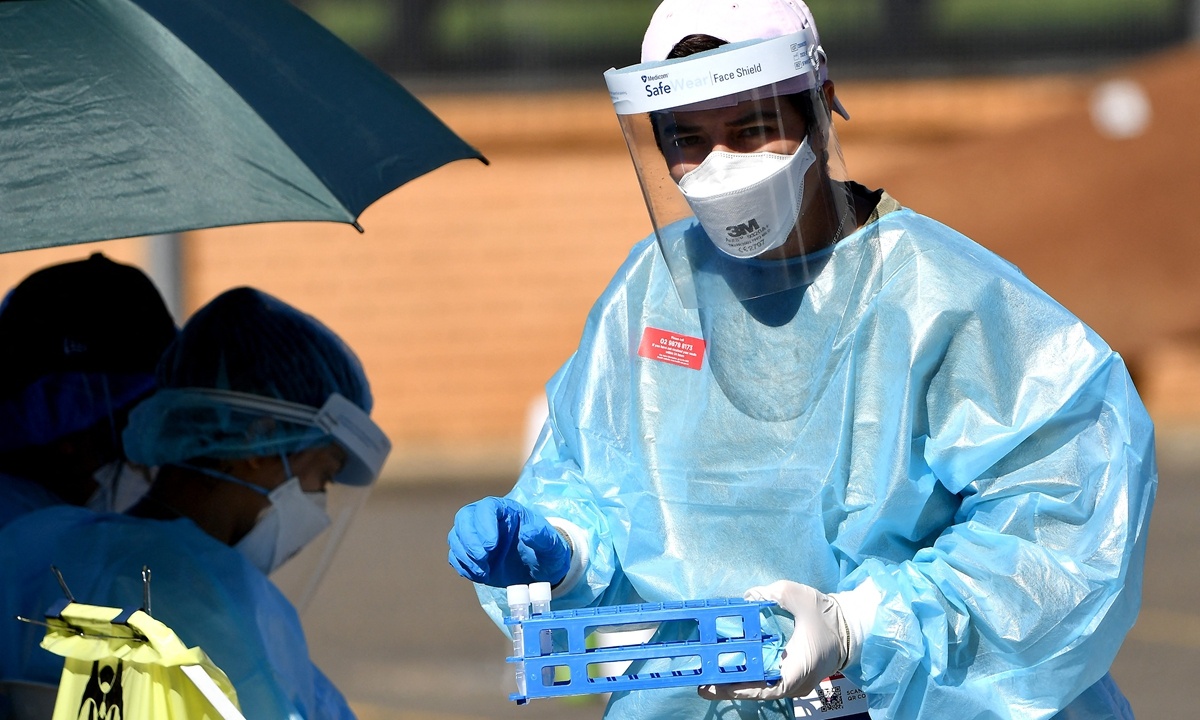 A health worker collects swab samples at a COVID-19 drive through testing site in the Smithfield suburb of Sydney on Thursday. Australia is battling to get on top of the fast-moving Delta strain that has plunged Sydney and Melbourne into hard lockdowns. (Photo: AFP)

Australia is at present frustratingly thrashing in a ferocious new wave of the Delta variant outbreak. Every day the numbers of new locally acquired cases of COVID-19 in its major states reach a disturbingly new high.

Despite the Morrison administration's continuous appeals to Washington for support for extra doses, Australia has never received any vaccines from the US, as was reported by The Australian newspaper recently, and confirmed by the Australian Health Department.

Canberra has always been congratulating itself and basking in the illusory aura of its "100 years of mateship" with Washington. Australia has been volunteering to act as the US' deputy sheriff in the Asia-Pacific. It consistently serves the American interests and strategic regional and global goals.

During the past several years, Australia has been unhesitatingly spearheading the US' campaign to contain, suppress and assault China's development, at the risk of losing its largest trade partner. Australia's two-way trade volume with China in 2020, as a matter of fact, was as much as A$251 billion ($181 billion). As comparison, the two-way trade volume between Australia and the US was A$80.8 billion.

What's more, to many's disbelief and bewilderment, the Australian Defence Force's top brasses have even been making saber-rattling remarks pledging to send off and sacrifice "our [Australia's] warriors" to fight with the PLA in the possible prospect of US military conflicts with China.

However, in spite of Australia's selfless devotion to the "rock solid alliance" between the two countries, the Biden administration has ruthlessly turned down Canberra's requests. This is happening despite Morrison's pitiable begging for some more Pfizer doses. This is really metaphorically like the gruel begging seen in Charles Dickens' novel Oliver Twist.

With earlier mismanagements and misjudgments of vaccine acquisitions, Australia's vaccination rollout has been slow-paced and sluggish. According to the federal and state leaders, 70 to 80 percent of the population needs at least one jab in the arm for the country to return to the minimum normalcy. But the distressingly short supply of vaccine shots has been dragging almost every Australian state into one strict lockdown after another.

At the prospect of an imminent parliament election by May 2022, the Australian Liberal-National Party Coalition needs a political booster in the form of shipments of vaccines from the US. This is badly needed for it to remain in its current seat in Canberra. However, Morrison and other China hawks in Australia have to face the fact that today's geopolitical reality allows no wishful thinking. Australia's loyalty to the US in almost every strategic issue has been unremitting and unswerving. But such blind commitment simply cannot bring back any more vaccines during the current existential crisis Down Under.

It is also an embarrassing fact for the Morrison administration that American businesses have been promptly taking up the lion's share in the Chinese market of coal, cotton, wine, beef and other exports left with Australia's injudicious exit since Canberra started to pick fight with Beijing crassly and meaninglessly. The US, in fact, has been pragmatic and self-interested in realistic issues, much to the dismay of the despairingly immature politicians in Canberra.

Washington's willful manipulation of the vaccine handouts should be a wake-up call for one of its blindfolded allies - namely Australia. As Professor Hugh White, defense and strategic studies analyst at the Australian National University, poignantly commented, "the Biden administration, like the Trump administration before it, is demonstrating that it is wholly unsentimental about Australia… We think we're their little mates, but US policy towards Australia has always been determined by how much we help their strategic interests."

Since the outbreak of the coronavirus pandemic, China has been collaborating with the rest of the world to combat the disease with medical facilities, the PPEs, and vaccines. More than 100 countries have authorized the use of Chinese-produced vaccines. China has been donating COVID-19 vaccines to more than 100 countries and regions, and exporting doses to over 60 countries, regardless of their political affiliations at all.

In this existential humanitarian crisis, vaccines are universally essential and should not be politicized and weaponized. The distribution of the vaccines should not be wantonly selective in accordance with any country's geopolitical strategy.

In view of this, would the Canberra politicians come back to their senses and behave like grown-ups to handle international relations, particularly Australia's relations with China?