The Xinjiang Uygur Autonomous Region is a vast and colorful part of Chinese territory. It's a land full of sunshine and hope where people are working for a better life, human rights have become increasingly enriched, and rights protection has improved.

However, some extremists have sneaked into the region to spread separatism, violence, and terrorism, making the originally peaceful area dangerous. Besides, some foreign media outlets and critics, who know nothing about the truth of Xinjiang, have arbitrarily accused the region of human rights violations without doing any investigation or research.

Rabble-rousing and propaganda by some malicious overseas media outlets has led to a misperception among many foreigners that human rights violations are taking place in Xinjiang. The truth is: those media outlets have no knowledge about the actual situation in Xinjiang at all, instead, they have resorted to three methods to smear the human rights situation in the region. 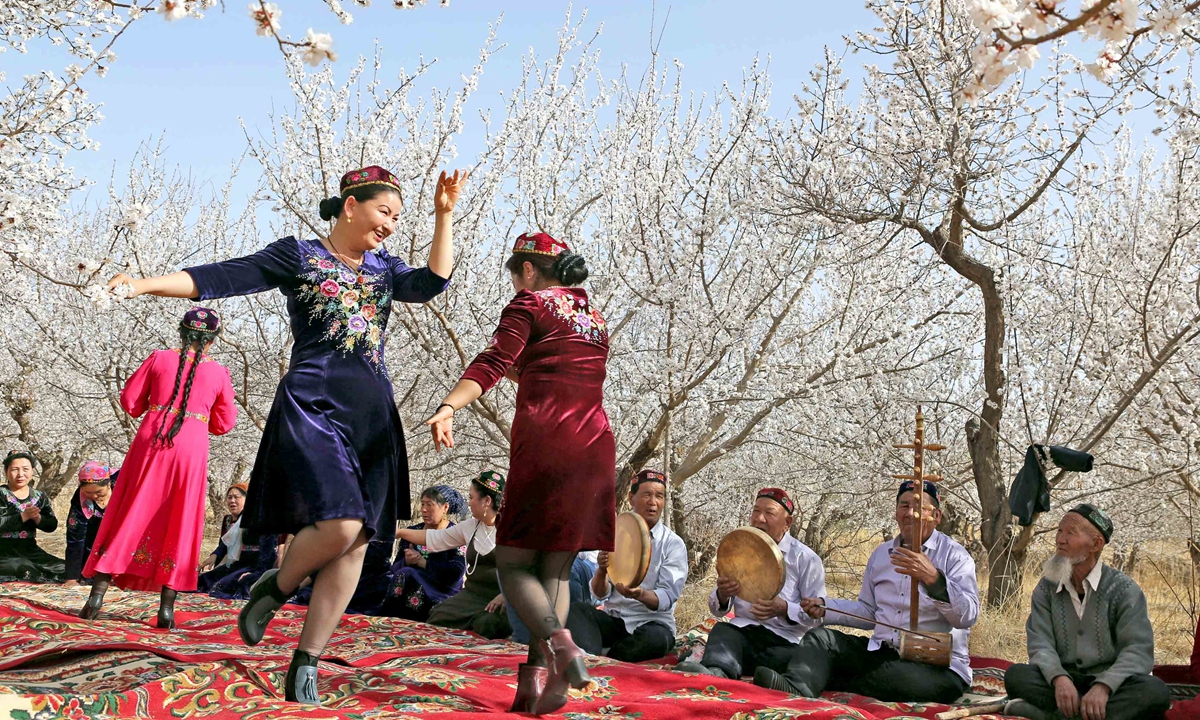 First, they cook up stories of human rights suppression based on hearsay, without any factual basis or proof. For many of them, it's politically correct to demonize Xinjiang's human rights situation, so they do not hesitate to speak ill of the region. Second, they substitute human rights violations that happened before the founding of the People's Republic of China or have nothing to do with Xinjiang for the region's real situation. Third, they look for "Uygur spokespersons," directing them to stage shows and file complaints about Xinjiang's human rights situation, in an attempt to fool people into believing those actors are representatives of Xinjiang. The aim of all three ways is to confuse right and wrong, making an issue of the human rights situation in Xinjiang to lead people to put pressure on the Chinese government.

The Chinese government and people have a strong sense of responsibility toward Xinjiang's stability and prosperity. We expect people of all ethnic groups in the region to realize common development together. In contrast, external forces with ulterior motives as onlookers from afar and non-stakeholders are only keen on pointing fingers at "various problems" of Xinjiang, and don't care about the region's development at all.

They will gloat over Xinjiang's suffering if the region becomes poorer and chaotic. For them, people's safety, tranquility and happiness in the region mean nothing. What they are concerned with is whether they could deal a blow to or contain China. They think they don't need any evidence to criticize Xinjiang's human rights situation, nor should they be held accountable for slandering the region.

Those forces smearing and throwing mud at Xinjiang's human rights development do so to a large extent because they are stuck in a rigid and backward international relations mindset. They believe China's rise is a threat to the Western world so China's development must be slowed down and thwarted. Although they are living in an age of global interdependence, because of such a Cold War mentality, what they are thinking more about is how to mess up China's order and stir conflicts and contradictions among the Chinese people. Any despicable tricks that could sabotage China's healthy and sustainable development and rumors that could hinder China's human rights progress are considered favorable tools by them.

Dark clouds cannot hide the sun forever. After visiting Xinjiang and observing the life of Xinjiang people there, I always tell foreign experts, scholars and officials with confidence that I suggest they go to Xinjiang to see with their own eyes smiling and satisfying faces as well as the way of life of the Xinjiang people. By that time, all doubts and rumors will be dispelled. They will grasp the real picture of the Xinjiang people's satisfying life and the high level of human rights protection in the region. It's believed that after more people understand a real Xinjiang, they will despise those conspiracies and tricks that demonize the region, be happy to see and support the efforts the Chinese people have made in striving for higher level of human rights development.

(The author is Professor of Law at Jilin University. opinion@globaltimes.com.cn)