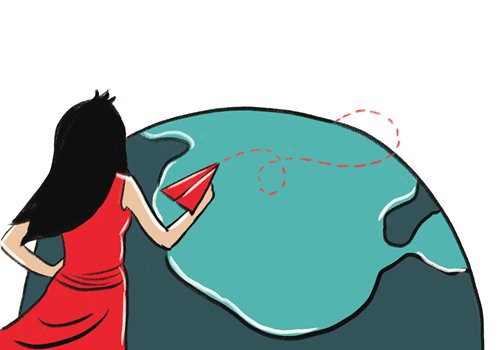 "Should I or shouldn't I encourage my children to go back to China for greater success and development?"

This shouldn't even be a question that parents ask themselves. Why not replace it with: "Will I or won't I respect my child's own decision? How can I support them? How can I adjust to the thought of them working elsewhere? Above all - should I or shouldn't I treat my child's life as a separate entity?"

Too often, parents hover over their children and waste time thinking about what the child should do to gain success and to achieve something great. This increases when others of their child's age start doing something that clearly shows early signs of success. I always ponder over the definition of success and what a "future development" really means.

Returning to China has indeed become a trend among second generation immigrants. However, this is more of a personal choice than anything to do with success. In an age when we are not confined by distances and are free to explore new opportunities in both old and new countries, moving into an unfamiliar environment exposes one to a different routine. Let's face it, there are those who hate the idea of leaving one's comfort zone. For them, exposing themselves to the unknown and unpredictable does more harm than good. On the other hand, there are people like me who can't settle, like to try things out, especially in foreign cities, and find more pleasure in the unknown world of being an expat.

Differences in perceptions, characteristics and personalities are not the means to categorize an individual as either gutless and predictable or adventurous and brave. For those who have spent the greater years of their lives outside of their country, wishing to return to China or Asia is neither wrong nor right. Young adults are capable of making judgments and deciding what they wish to do. If it is something that they are comfortable with or are keen to try then where they stand in the comfort zone is not at all important.

While I agree that there is more energy, greater opportunities and experiences to gain in China and Asia, this doesn't mean it is the only place where one should seek further development.

Some might overlook China and Asia due to their own interpretation of the region. I've heard far too many comments from "But it's a communist place" to "They pay you nothing" to "What opportunities and why Asia?" Allowing such comments made mostly by those who have never set foot in that region to hinder your own decisions is not the wisest thing to do. Everyone is different and we all like to share our opinion.

Many years ago, I found myself at the crossroads and pondered on whether I should leave Australia to seek new experiences in China. I was not limited by language, only experience. I hesitated before asking myself two questions: will I regret my decision not to quit a quiet and comfortable life in Sydney since I lacked the willpower to try something different in China? Will I feel like punching my younger self when I'm in my late 80s knowing that I stayed in my comfort zone?

Knowing that my answers are Yes, I left. Here I am, seven years later and still on the path to collecting more experiences, trying to stay positive and figuring out what success means to me.

During my time in China, I've had my moments of sheer joy, surprise, frustration and sadness. I've had times when I felt I made great achievements to two consecutive months of sobbing myself to sleep. I am in no way more successful than my friends who remain back in Australia. There are many more like me who still find themselves in China - figuring out their host country and gaining more international exposure and experiences. Things don't get easier for anyone regardless of whether they are in or out of their comfort zone.

If one shows immense interest in China, is willing to learn the language and understands that they are exposing themselves to something different, difficult, interesting, fast-paced, rewarding and frustrating, then go for it. They will come out more enriched and with greater experiences. If this is what they want, then that is success. However, if one is perfectly happy with their own environment and attaches little importance to international experiences or views working elsewhere as a detriment, then deciding to stay put is also a success.

All in all, as long as one doesn't live with personal regrets then where one goes is at one's own volition.