China and Angola established diplomatic ties in 1983. Nineteen years later, Angola’s civil war was formally brought to an end, and the country was in urgent need of reconstruction. 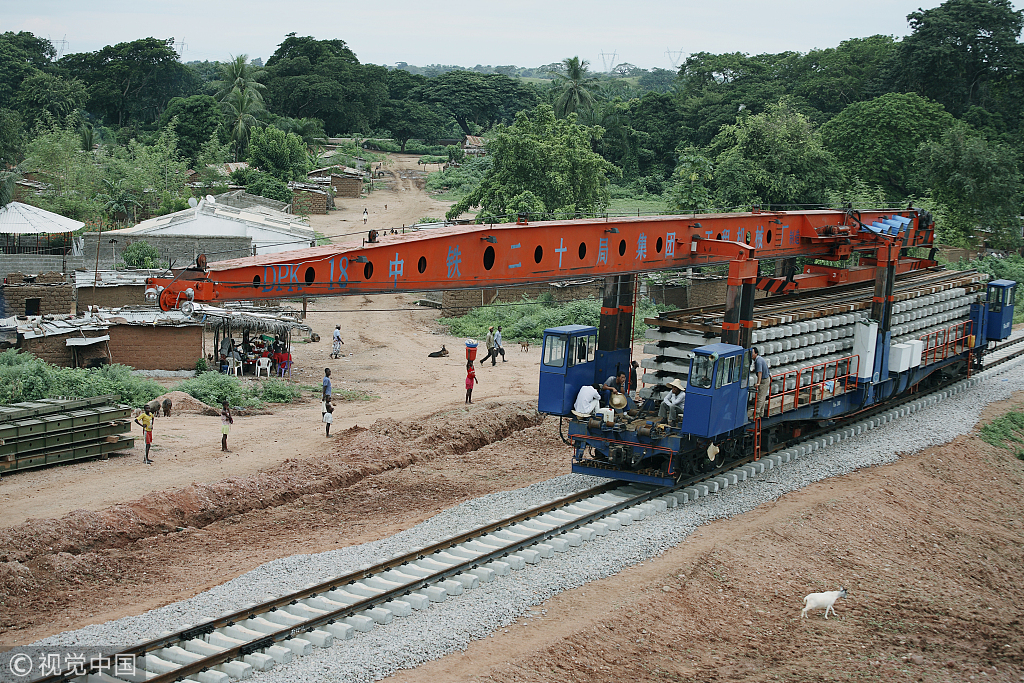 Chinese railway workers put tracks on April 4, 2007 in Dondo, about 200 kilometers outside Luanda, Angola. Chinese companies are building and upgrading two different railways in Angola, and this part is about 500 kilometers long. (File photo: VCG)

Given the broken promises of western countries, it was China’s timely assistance and financing cooperation that did a favor to Angola, marking the start of the rapid development of bilateral ties.

In the past decade or so, China has renovated and constructed a total of 2,800 kilometers of railways, 20,000 kilometers of roads, over 100,000 social residences, as well as more than 100 schools and 50 hospitals for Angola. In addition, China has offered business, agriculture, health, media and police affair courses to over 2,500 Angolans.

Chinese enterprises have made huge contribution to Angola’s economic and social progress, gaining high reputation from the latter’s government and society.

Angola is a country highly dependent on petroleum, and the huge impacts caused by the sharp downfall of international petroleum price in 2014 made its government realize the importance of economic diversification and industrialization. In this regard, it is in need of both China’s assistance and experiences of reform and opening up.

Since the Johannesburg Summit of the Forum on China-Africa Cooperation (FOCAC), China has been actively working with Angola to implement the results of the meeting by adhering to the principles of sincerity, practical results, affinity and good faith and upholding the values of friendship, justice and shared interests, which serves as China’s African policy.

So far, the China-aided demonstration center for agricultural technologies and the international relations institute project have been completed and are going through handling-over procedures.

Chinese enterprises have extended their cooperation in Angola to multiple fronts, including a series of major infrastructure projects such as the phase II project of Kilamba New City, the Caculo Cabaca Hydropower Project, the Soyo Combined Cycle Power Plant, and the New International Airport of Luanda.

These practical cooperation results substantially promoted Angola’s economic development and improved people’s livelihood. They will help enhance Angola’s capability of independent development, and lay a solid foundation for its future industrialization and modernization.

It has been reiterated by Angolan President Joao Lourenco that China is Angola’s priority partner of cooperation since he assumed office last September. The Angolan President places high importance on the 2018 Beijing Summit of FOCAC, and he is one of the first African leaders that confirmed attendance to the meeting.

The author, Cui Aimin is Chinese Ambassador to Angola.