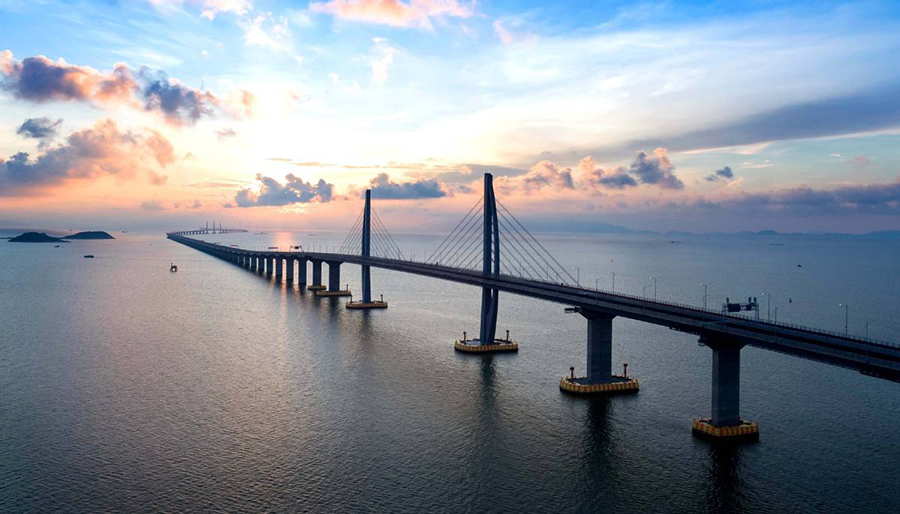 An aerial view of the Hong Kong-Zhuhai-Macao Bridge. At 55 kilometers, the bridge is the world's longest sea-spanning structure. (Photo:HZMB AUTHORITY)

The bridge marks a major step of the central government to support development of Hong Kong, Macao and the Pearl River Delta. It is also a key achievement made through close cooperation between Guangdong, Hong Kong and Macao under the principle of “One Country, Two Systems”.

The Hong Kong-Zhuhai-Macao Bridge is a national engineering and pillar project of China. It is the world’s largest cross-sea bridge with the longest steel structure and undersea tunnel.

The bridge is the most technologically complicated one in the world. Its construction is the most difficult and its scale is the largest in the world. The bridge builders have overcome a large number of world-class difficulties, applied the world’s most advanced management techniques and experience and finally completed the task with assured quality and quantity.

Praising builders of the bridge for breaking a number of world records, Xi Jinping, general secretary of the Communist Party of China Central Committee, said they demonstrate the nation's spirit of striving to overcome any difficulties, the national strength, the innovative ability, and the aspiration to be the world's best.

The bridge carried high expectations of the three areas for deep cooperation and common development since the beginning of its construction.

It will slash travel time between Hong Kong and Zhuhai and Macao from 3 hours to just 45 minutes. The bridge opening means that passenger and freight transportation between the western side of the Pearl River and Hong Kong will no longer mainly rely on waterway as no detour is needed on land.

In addition, the bridge provides great convenience for residents of the three places, and will become an important hub connecting the two sides of the Greater Bay Area.

The opening of the world’s longest cross-sea bridge is of great value to promote the construction of the Greater Bay Area, as well as mutually beneficial cooperation between Chinese mainland, Hong Kong and Macao.

It is also of great significance to maintain long-term prosperity and stability of Hong Kong and Macao by involving them into the national development strategy.

The vision for the Greater Bay Area is to build it into a top-ranking bay area and a world-class city cluster full of international competitiveness and vitality, while adhering to the cardinal principle of “one country” and making the most of the advantages of “two systems”.

It’s also envisioned that the Greater Bay Area will become a model for high-quality development, a center of international scientific and technological innovation, a demonstration zone for deep cooperation between Chinese mainland and Hong Kong and Macao, and a paradise for life, work and sightseeing.

To materialize all these visions, infrastructure connectivity is both a prerequisite and a crucial support. The Hong Kong-Zhuhai-Macao Bridge, which serves as the artery of the Greater Bay Area, is definitely going to spur people-to-people exchanges and economic and trade communication among the three places.

Moreover, the bridge will boost the development of the Greater Bay Area and strengthen overall competitiveness of the Pearl River Delta. It will also create new opportunities for Guangdong, Hong Kong and Macao to complement each other with their respective advantages and carry out win-win cooperation.