The recent highly publicized suicides of TV personality Anthony Bourdain and fashion designer Kate Spade has brought to light a major problem in the world: suicide. Yes, suicide rates are increasing to new heights and America needs to take a frank and honest look at this epidemic if its hopes to overcome it.

According to a 2018 study by the US Center for Disease Control, suicide rates have risen 30 percent since 1999 and now stands as the nation’s 10th leading cause of death. A World Health Organization study says that the world’s suicide rate has increased by 60 percent in the last 45 years. It is also one of the top three leading causes of death among men and women aged 15-44.

First and foremost, there should be no stigma or shame attached to seeking professional help for mental illness. For too long, visiting a psychiatrist or having depression was considered taboo and something that should be hidden away in shame. In popular media, going to therapy meant you were one step away from being institutionalized, being put into a straight-jacket, or being one of Jack Nicholson’s crazy friends in ‘One Flew Over the Cuckoo’s Nest.’

New attitudes are hardly better thanks to popular shows like ‘13 Reasons Why’ – which glorifies suicide as a way to “get even” with one’s oppressors instead of seeking mental health. Clinical psychologists and other experts also expressed concerns that youths might be committing suicide based off their viewing of the show. One school district in Florida said it started receiving increased reports of students carrying out suicidal and self-harm behavior thanks to ‘13 Reasons Why.’ 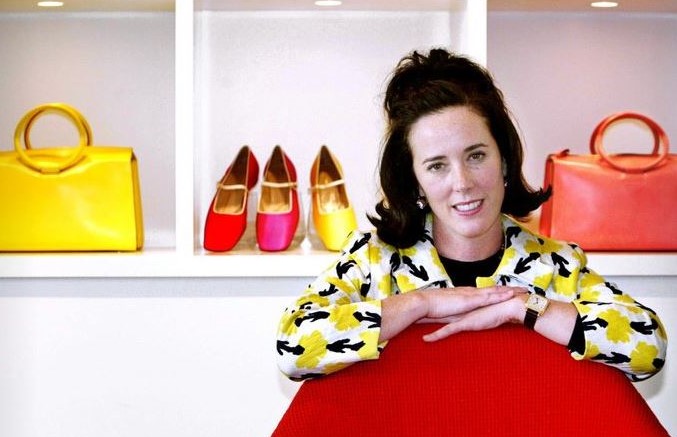 In this May 13, 2004 file photo, designer Kate Spade poses with handbags and shoes from her next collection in New York. Law enforcement officials say Tuesday, June 5, 2018, that New York fashion designer Kate Spade has been found dead in her apartment in an apparent suicide. (File photo: AP/Bebeto Matthews)

People, especially young people, need to understand that a successful suicide is forever and is not as neat as it is portrayed in the US media. Suicide can sometimes lead to lasting problems that can send shockwaves throughout a family, group of friends, or even a community. Suicidal and depressed behavior should always be taken seriously and treated by mental health professionals to avoid tragedy.

In fact, seeking professional help for depression and other mental illnesses should be celebrated in since it’s self-help. Society cheers on people who seek help for alcohol and drug addictions and even eating disorders – so why is it so hard to congratulate someone for seeking help for mental illness?

For Spade and Bourdain, it would be reasonable to assume that both celebrities refused professional help to not tarnish their images. Unfortunately, the same thought process can be applied to many other Americans who need help. However, bettering one’s self should always be seen as a positive aspect, and no one should feel bad for going to therapy.

Furthermore, as a result of the increased number of school shootings in America, some believe that people with mental illness are powder kegs waiting to explode. The American public needs to be more willing to accept mental disorders as a common occurrence since one in four people worldwide are affected by mental or neurological disorders according to the World Health Organization. Once mental illness becomes de-stigmatized and less associated with people who committed the killings at Stoneman Douglass High School or Columbine High School: the easier it is to cope with and cure. In this Oct. 5,2017 file photo, Executive Producer and narrator chef Anthony Bourdain attends the premiere of “Wasted! The Story of Food Waste” at the Alamo Drafthouse Cinema in New York. Bourdain has been found dead in his hotel room in France, Friday, June 8, 2018, while working on his CNN series on culinary traditions around the world. (File photo: AP/Brent N. Clarke/Invision)

America should also be more aware that people who commit suicide most of the time exhibit warning signs and do not attempt suicide just on a whim. Mental Health America, a nonprofit organization, states that it is best to trust your instincts if someone exhibits several suicide warning signs, such as expressions of hopelessness, personality changes, lacking interest in future plans, and giving away prized possessions. Dismissing suicidal behavior could cause the suicidal victim to believe that they have no help or support in their time of need.

What truly matters, most of all, is the spread of awareness that depression and suicidal thoughts can be treated. Many people choose suicide because they cannot see any solutions to their problems, but the truth is there are thousands of support groups available and millions of people who willing to help. Once the American public starts advocating for help, as opposed to suppressing feelings, it will become easier for people to realize that suicide is not their only choice.

It’s also important to remember that modern burdens, such as rising housing costs, unemployment, and student loan debt, weigh heavily on society and are a major cause for concern. Studies find that these factors, and others, can contribute to clinical depression and major depressive disorders. One psychotherapist named Lena Franklin said that society’s hyper connectivity and reliance on technology can lead to depression and anxiety.

Over the coming weeks, the media will analyze every aspect of Spade and Bourdain’s lives – and hopefully someone will make the connection that depression isn’t always obvious. Suicide isn’t always on the surface and noticeable and sometimes can blindside the best of us.

Mental health, depression, and suicide will always be difficult topics to talk about because it makes most people feel uncomfortable: but we still need to talk about it. The public needs to ask ‘why?’ not only when their favorite celebrities commit suicide, but also when their friends and family members do it too. If society starts talking and encouraging positive help for people with depression and mental illness: it could finally break America's rising suicide trends.