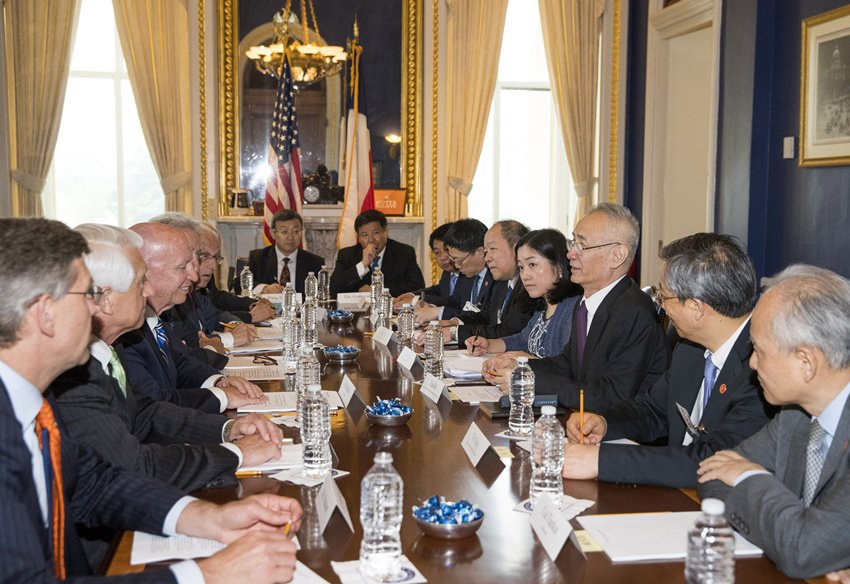 WASHINGTON, May 19 (Xinhua) -- Beijing and Washington on Saturday came out of their tense and difficult consultations with a consensus not to engage in a trade war.

In a joint statement issued on the same day, the two nations vowed to strengthen their economic and trade cooperation on a trove of fronts.

The just-concluded US visit by the Chinese delegation is a positive, pragmatic, constructive and a productive one. It has implemented the consensus reached previously by the heads of state of the two countries, and helped reassure the two peoples and the international community.

From senior Chinese official Liu He's trip to Washington in late February, to a US official delegation's visit to Beijing in May, the latest telephone conversation between Chinese President Xi Jinping and his US counterpart, Donald Trump, and to Liu's latest visit to Washington as Xi's special envoy, the end result of these exchanges has confirmed a clear-cut message: the world's two largest economies are forging ahead to bridge their differences under the guidance of the consensus reached by the two presidents.

The two nations this time have reached agreements in many areas, such as energy, agro-goods, medical and high-tech products and finance. They have also vowed to boost cooperation in the protection of the intellectual property rights and in two-way investments.

Such hard-won results would not have been possible without the Xi-Trump consensus, and the bilateral proactive commitment to resolving their economic and trade disputes.

The art of the deal lies in mutual understanding and compromise so as to ensure common interests. Any one-sided transaction at the cost of the other party is doomed to fail, while win-win cooperation brings success.

What the two countries have agreed this time will see more exports of high-quality US energy and agro-products exported to China. It will on the one hand help the United States reduce its trade deficits and grow its economy, and on the other hand diversify and optimize the supply of goods for the welfare of the Chinese people, while better accommodating the need to promote a quality-growth of the Chinese economy.

No agreement comes easy. In the face of Washington's unreasonable pre-conditions in earlier consultations, Beijing had always returned with resolute responses and had never backed down. China went into these talks with a firm principle based on the interests of the country and its people, in full view of the country's actual needs.

Due to the differences from both sides in areas such as economic structure and cultural cognition, the settlement of their trade disputes would be hard and complex, and requires a long-term commitment.

It requires both countries to show sincerity, wisdom and patience to manage and resolve their differences.

This is indeed a good beginning in seeing the latest consultation results, especially since the two countries were previously at loggerheads with each other. With the guiding principle of mutual respect and win-win cooperation at the helm, China and the United States will always overcome every barrier together.