The Donald Trump administration’s strategy of “America first” is considered by many as “America only”. They believe Trump has diverted his predecessor Barack Obama’s diplomacy to another direction. 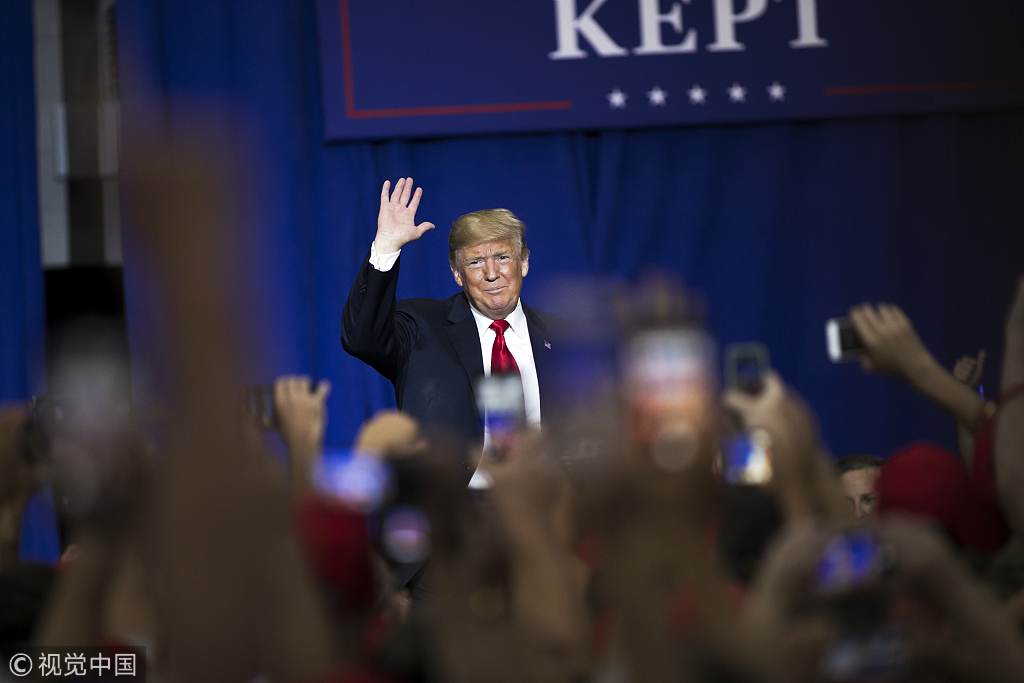 US President Donald Trump waves during a rally in Lewis Center, Ohio, US, on Saturday, Aug. 4, 2018.

This diversion can be observed from the country’s recent diplomatic moves from withdrawals of multiple “international groups” to the relocation of the US embassy in Israel.

However, the ongoing diplomatic strategies and logic of the US government are still a continuation of the former administration’s policies. The difference is that the current policies have shaken off the banner of the so-called liberalism, and become simpler and cruder.

The “illiberal hegemony” pursued by Trump still stressed the importance of hegemony, just like what Obama addressed at the United States Military Academy, also known as West Point, in 2014, “America must always lead on the world stage.”

From the macroscopic perspective, the national strength of the US is still on a downward trend because of the financial crisis and two anti-terrorism wars, which determines that Trump’s and Obama’s foreign policies have no difference in nature.

Obama administration’s foreign policy doctrine can be summarized as “don’t do stupid things”. It retained the country’s hegemony by making good use of resources and avoiding waste, which can be reflected in restraining the use of force, advocating multilateralism, promoting “values” diplomacy with “smart power”, leading allies from behind and reaching out to hostile nations.

Trump seems to have done many “stupid things”, such as launching campaigns against globalization and multilateralism and reshaping the pattern of regional allies, but what he did was actually another passive response under the US strategic contraction in dealing with the outside world.

Trump’s decisions all started from safeguarding the narrow national interests of the US so as to cut off the route for other countries who plan to take a free ride and concentrate on reciprocity and mutual benefit on resources.

Apart from the “retrenchment” strategies adopted by Obama, Trump places more importance on diversifying the approaches to safeguard the US hegemony.

Under the context of strategic contraction, Trump continued Obama’s choice of shifting the US strategic pivot to the east. With a focus on ending anti-terrorist wars in the Middle East, Obama withdrew the US troops from Iraq, and made a timetable for pulling US army out from Afghanistan.

For Trump, he doesn’t want to spend much on the Middle East either though he outlined new strategy for Afghanistan and Iran.

Obama started a process of recessing from the political and diplomatic agendas of Europe in his administration, during which the US also “led from behind” on Libya, delegated the mediation work to France and Germany during the Ukraine crisis, and broke the “red line” promise on the alleged chemical weapons in Syria with military action.

Now Trump has gone a step further than Obama as he not only shut his ears to the European internal crisis and interfered with internal affairs in Europe by supporting Brexit and associating with populist leaders, but also pressured the Europe on economy and trade and prioritized its own interests instead of responsibility on security issues.

The US is placing more resources on the Asia-Pacific or the so-called “Indo-Pacific” region while reducing its presence in the Middle East and Europe in a well-planned manner.

The current Indo-Pacific is still a concept and in lack of important economic support from such initiatives as Trans-Pacific Partnership, or TPP. But the US’ continuous efforts to transfer its military forces to Indo-Pacific region and strengthen its link with Japan, Australia and India give full evidence of its determination to keep shifting strategic pivot to Asia-Pacific region.

However, owing to the internal political instability, Trump’s methods to sustain the US supremacy and push forward the national strategy are quite different from those of Obama. But resorting to the world to ease internal pressures will only bring new uncertainties to international order.

On one hand, Trump takes domestic politics as the basis for diplomatic adjustment. The seniors, white community and males in the US became the hardcore supporters of Trump after being long neglected by Obama’s left-wing politics on domestic issues, and their dissatisfaction toward the US society, politics, and economy encouraged Trump’s reform on diplomatic policies.

The selfishness in the ongoing US policies on economy and trade, global governance and collective security reflects the public opinion and demands of the American people.

On the other hand, Trump believes that the future security and prosperity of the US should not be restricted by international systems, which subverts the Wilsonian Diplomacy that has taken dominance since the World War II. Holding that global affairs are a competitive game, Washington put less energy to build a stable and US-centered international system.

The US finally comes to a real strategic contraction under Trump’s administration after the transition in Obama administration. However, both Obama and Trump haven’t mapped out a big strategy that will guide the US for future decades, but sent confusing signals to the outside by adopting foreign policies that were more likely to be reactive response and passive strategic adjustments to current situations.

The author, Sun Chenghao is an assistant research fellow at the Institute of American Studies, China Institutes of Contemporary International Relations.