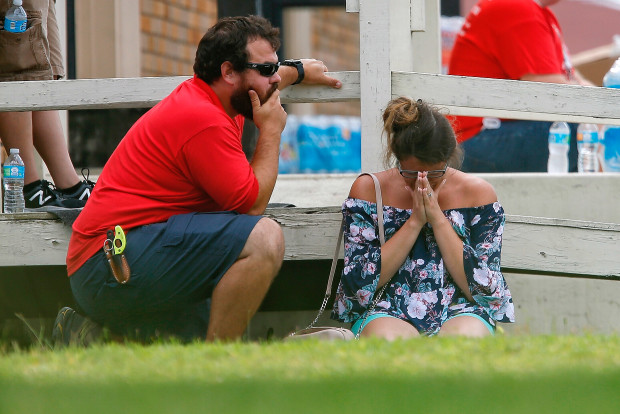 A woman prays in the grass outside the Alamo Gym where parents wait to reunite with their kids following a shooting at Santa Fe High School Friday, May 18, 2018, in Santa Fe, Texas. (Photos: AP)

A 17-year-old high school student armed with a shotgun singlehandedly turned an art class into a bloodbath at Santa Fe High School in Southeast Texas, killing 10 while terrorizing an entire student body.

Many are not only shocked by the brutality of the violence but also with the fact that it was only three months ago when a similar incident happened at a high school in Parkland, Florida.

As usual, uproar over inadequate gun laws that supposedly ban assault weapons has grown louder. Politicians and lawmakers are prepared once again to give tailored speeches about the need for more gun control regulations. As the public wastes its time listening to the clichéd responses of state and national lawmakers, the final straw regarding effective gun control laws has broken the camel’s back.

The previous Obama administration tried to enact stricter gun control policies, but it was only an empty as their efforts came up short. US President Donald Trump had called for better gun control measures, including advanced background and mental health checks on gun buyers after the Parkland massacre, but did not press hard enough for action. One obvious reason has to do with how costly such background checks would be for those who sell guns.

Dimitrios Pagourtzis, the Santa Fe gunman, allegedly gained access to the guns he used from his father who legally owned them.

Nikolas Cruz, who lived in Parkland, was somehow able to buy an AR-15 assault rifle and pass a quick background check via the FBI’s criminal database.

Second Amendment advocates often talk about safe and responsible gun ownership, but both high school shooters obtained the guns they used through legal channels or from a licensed gun owner. Such conditions should leave gun ownership advocates embarrassed by the current screening system in place.

According to estimates in 2009 from the Congressional Research Service, there were 310 million civilian-owned firearms in the US.

Would-be shooters can acquire guns through other means if they’re unable to pass the screening process. It would be almost impossible for law enforcement officials to find those individuals and confiscate their weapons.

When speaking with local reporters, Santa Fe survivor Paige Curry said, "It's been happening everywhere. I've always felt like eventually it was going to happen here, too. I don't know. I wasn't surprised. I was just scared."

According to a 2015 report on arms trafficking released by a government research service in Mexico, an estimated 2,000 weapons illegally entered Mexico from the US on a daily, making up to 85 percent of illegal firearms circulating in Mexico.

For the US, this could require law enforcement officials to conduct door-to-door campaigns across to get rid of the sheer number of illegal weapons circulating inside its borders. A so-called solution like this is more far-fetched than establishing a thorough and air-tight background check system. 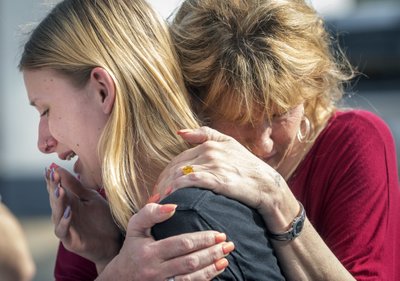 Santa Fe High School student Dakota Schrader is comforted by her mother Susan Davidson following the shooting on May 18, 2018.

The American public feels powerless over the issues surrounding gun control because what they’ve realized by now how impossible it is to prevent would-be school shooters from acquiring weapons as Second Amendment advocacy groups protect them.

Gun control continues to lose its ongoing battle over firearm-related crime in the US. Today, the only option society has would be to implement a strict nationwide ban on gun sales and ownership. A move like that might be just enough to turn the tide.

Gun rights advocates argue that a good guy with a gun can stop a bad buy with a gun. However, this idea alone creates a paradox on how best to separate the bad from the good, and according to what standards. For some reason, they have yet to inform a concerned society.