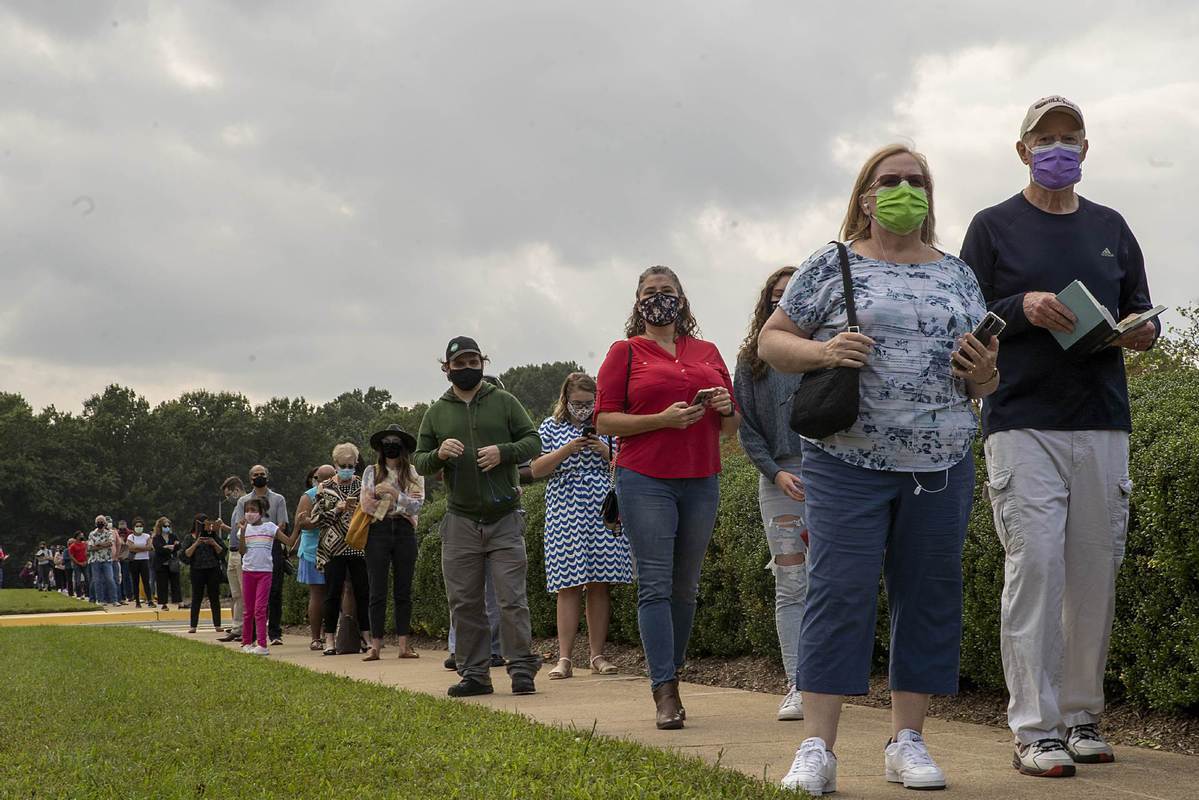 People stand on line, spaced six apart due to COVID-19, in order to vote early at the Fairfax Government Center on Sept 18, 2020 in Fairfax, Virginia. (Photo: Agencies)

Driven by pure self-interests, the United States has once again spread its "political virus" in front of the international community, exposing its desperate blame-shifting intrigues amid its epidemic crisis.

What Kelly Craft, the US permanent representative to the United Nations, said at a summit-level debate of the UN Security Council was nothing fresh but parroting previous China-smearing rhetoric by other Washington politicians. Her accusations are as groundless as they are brazen.

Washington cannot expect to beat the novel coronavirus through such practices. On the contrary, by stoking confrontation and division, the United States has seriously disrupted the international community's joint efforts to fight the pandemic.

Since the onset of the pandemic, the United States, with the world's most advanced medical technologies and system, has largely failed to contain the pathogen, as the country is tragically leading the world in terms of both COVID-19 caseload and death toll, leaving its global image tarnished.

To shift blame for their hellish pandemic response, those politicians have left no stone unturned to smear China and the World Health Organization (WHO). Washington's overbearing bullying has prompted the world to see clearly their political scheme behind the trick of blame-shifting.

The timeline of China's response to COVID-19 outbreak is clear. The Chinese people have stood together and made huge efforts and sacrifices in combatting the disease. China's contribution to the global battle against the pandemic has been widely recognized by the international community, including the United Nations and the WHO.

"The United States should understand that blaming others will not solve its own problems. All countries have their problems along the way of development. And these problems should first and foremost be solved through one's own efforts. By shifting responsibilities, or 'lying, cheating, stealing,' one will not solve any problem, but only drift further down the wrong direction," said Zhang Jun, China's permanent representative to the United Nations, in his response to Craft.

As a major country in the world, the United States should set a good example for the 193 members in the UN family. However, its behavior is utterly rejectable.

It is the United States that has time and again undermined the international order by departing from international institutions and treaties at will.

It is also the United States that has stirred up unilateralism and exceptionalism at a time when the global community faces so many threats and challenges that need to be tackled together.

As the world marks the 75th anniversary of the United Nations, those US politicians should seriously revisit the purposes and principles of the UN Charter and thoroughly reflect on the fundamental reasons why the law of the jungle was universally rejected by the international community after World War II.

Those US politicians should stop their self-designed "political show" and instead shoulder due responsibilities for the world.