International trade order is at risk due to multiple factors intertwined together, which will bring more uncertainties to global economy. 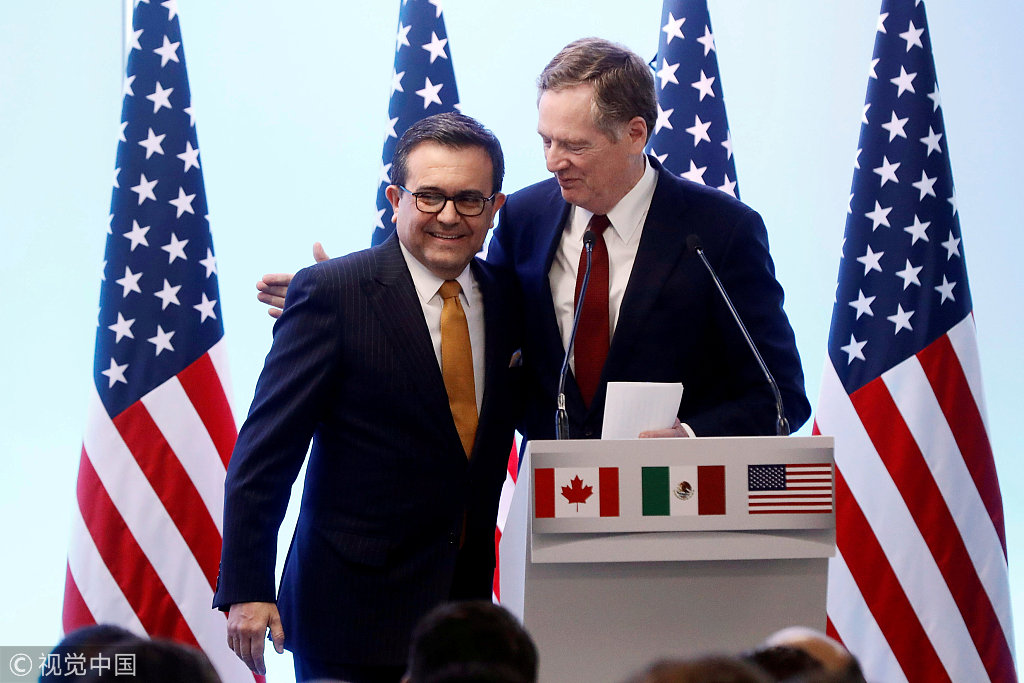 US Trade Representative Robert Lighthizer embraces Mexican Economy Minister Ildefonso Guajardo during a joint news conference on the closing of the seventh round of NAFTA talks in Mexico City, Mexico March 5, 2018. (Photos: VCG)

On one hand, the international trade order is now directed by three major voices. France and Germany are devoted to promoting traditional rule-based free trade, which can be seen from the World Economic Forum held in Davos, Switzerland at the beginning of this year; US President Donald Trump advocates reciprocal openness-based fair trade order; and China puts great energy on advancing one that is open and inclusive.

On the other hand, major developed countries are taking various approaches to speed up the launch of new topics and new rules in pursuit of establishing a system for future revolution of international trade order. In the meantime, cooperation mechanisms like the G20 and the “BRICS Plus” are playing an active role in pushing reform of global governance.

These different propositions also reveal the institutional flaws in the current international trade order. Three arduous challenges in front of world economy have yet to be addressed effectively, including the lack of growth drivers, lagging economic governance and unbalanced development.

The reason for this lies in the lack of efficient and fair international trade order, reflected by the unfair distribution among developed countries, unbalanced development between developing and developed world, and weak coordination in making macroeconomic policies.

The trade confrontations initiated by the US and its possible consequences constitute the biggest risk factor.

By playing the tariff game with the EU, renegotiating the North American Free Trade Agreement (NAFTA) with Mexico and Canada, and starting a trade war against China, the US attempts to rebuild the international trade order based on its own interpretation of “fair” trade rules as the world’s largest economy.

At this crucial moment, the US willfully started a global trade war, which will likely stop the growth momentum and cast shadow on global trade. For instance, the prospering manufacturing sector, especially high technology and medium- and high-tech manufacturing will lose the impetus for growth.

Against the backdrop of globalization, the various procedures on an industrial chain are usually finished in different countries. A war in trade and industry may bring disorder to the global supply chain, and result in a chaotic economic, trade and industrial order that leads to an earlier recession.

At this moment, major economies should think over the spillover effect the trade war may have on global economy, or else they are being irresponsible.

Based on this consideration, even though the US ignited the trade war and escalated it, China remains restrained on responding to and taking countermeasures against the US and tries its best to reduce the impact of the trade war on global economy and trade.

As a responsible country, China opposes trade protectionism and the beggar-thy-neighbor opportunist behavior. Meanwhile, the country continues deepening reform and opening up, pushing ahead with the construction of the Belt and Road and strengthening all-round international cooperation.

Facing a global trade that might go out of order, China still looks for global cooperation with the maximum efforts.

Under the new circumstance, China will continue comprehensively deepening reform of the market and expand opening up in an all-round manner to propel high-quality development.

China, a country with the largest middle-income population, the largest scale of savings and the most complete industrial system, will never be marginalized.

Just as it did upon the accession to the WTO, China will continue to actively take part in and propel economic globalization, dock with higher-quality markets and make its industries more globally competitive.

Focusing on its own affairs, China is bound to stand in the international arena with stronger national strength and global influence. At that time, other stakeholders will be more rational on the choices of whether to work out a new set of rules to exclude China or optimize the multilateral trade rule and system together with China.

The author, Zhang Yansheng is chief research fellow with the China Center for International Economic Exchanges.