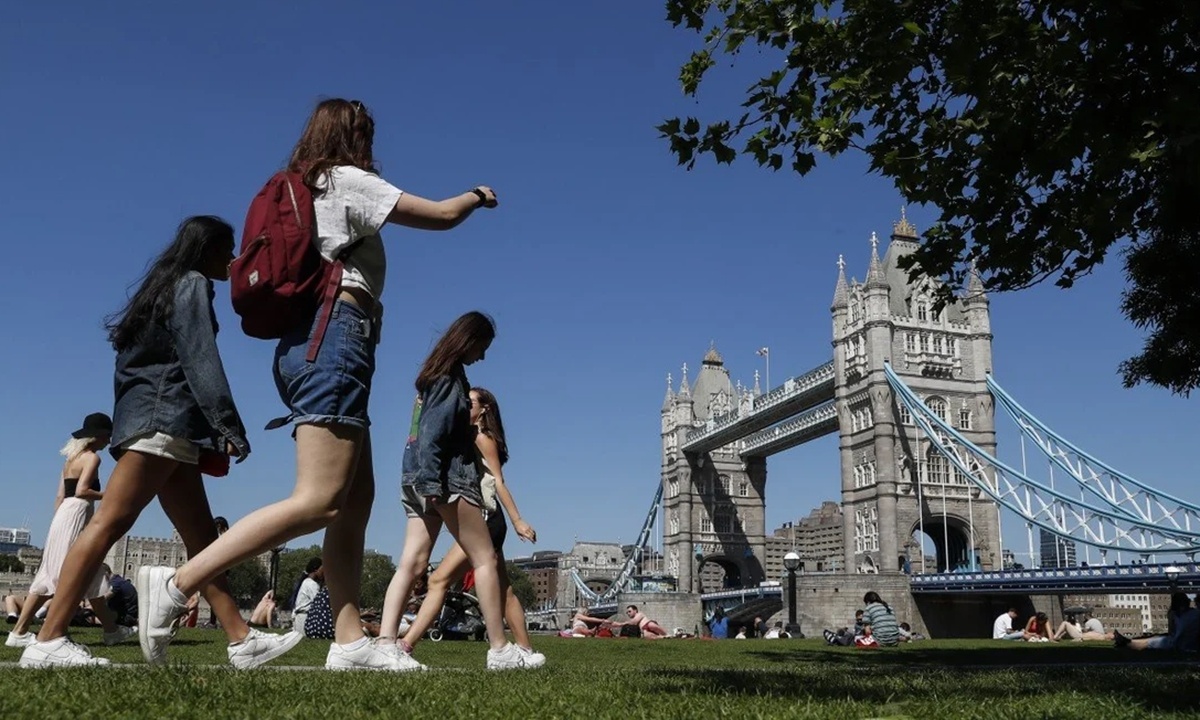 In Britain, 29 per cent of young people saw China as a partner, compared with 20 per cent for all ages. (Photo: Xinhua)

A recent survey finds that Westerners aged 18 to 24 hold more positive views toward China than their elders. The findings have caught some eyeballs.

The poll, published on Monday, was conducted by American think tanks the Bertelsmann Foundation and the German Marshall Fund of the United States (GMFUS) among 11,000 people from 11 countries including the US, Canada, France, Germany, Italy. It found "people feel generally negative about China's influence in global affairs" but a contrast exists among different generations of Western people when it comes to China's image. For instance, "a quarter of young respondents in the US (25 percent) and UK (29 percent) consider China as a partner," compared with the national average - 15 percent in the US and 20 percent in the UK.

Three major reasons are behind the phenomenon, Xin Qiang, deputy director of the Center for American Studies at Fudan University, told Global Times on Tuesday. First, some of the elder generations had gone through the Cold War. They had been greatly influenced by anti-communism propaganda when their values were being shaped. Second, the younger generation receives more comprehensive information from internet platforms like YouTube, TikTok, while the elder generation mainly gets biased information from mainstream media, where capital and political forces play the role as a hidden hand to manipulate their stances, choreographing smears against China. Third, people can travel conveniently across the world, which enables the younger generation to get to know China and Chinese people in a vivid way.

Some netizens argue the proportion of young people who view China positively is not high. Take the US, the figure is 25 percent. Yet give a thought to the backdrop, where Americans are fed by "leaked" US intelligence, news stories and politicians' comments that attack China every day, ranging from the pandemic to fetanyl. A hysterical theory is hence prevailing in the US - China is the root cause of all Americans' problems. It is noteworthy that there are still young Americans who regard China as a "partner" rather than a "rival."

As Young Chinese people become increasingly confident and start to view the world with a mind-set of equality, rather than looking up to the West, some young Westerners also see China as equal, instead of overlooking the latter with a condescending manner like their elders.

When Westerners came to China decades ago, they saw poverty and backwardness. Their stereotypes have not changed as quite a few of them never came again. Some have not visited the country at all but tend to take allegations and rumors about China as facts. However, some young Westerners can see what is happening in China. They see the strong dynamic of development here, solid infrastructure construction and a stable society. They do not have any reason to look down on China. Some even wish to stay here, as there are more opportunities, Xin noted.

The survey proves no matter how mighty the US propaganda machine is, it may fool some people some of the time, but can never deceive everyone forever. China's ability to keep COVID-19 at bay has made the globe see China's advantages in its governance system. As the poll shows, in the US, "China's image improved significantly from 20 percent seeing China's influence as positive in 2020 to 31 percent now, and this is even higher than the pre-pandemic level (29 percent)."

On its website, GMFUS said, "While a positive image of China prevailed particularly in the age group of respondents between 18 and 24, negative views of China increase with age. This might indicate a long-term change in public opinion on China over time across the Atlantic." Frankly, it only demonstrates how Western countries' habit to spin lies and sensationalism about China will influence their people.

How will young Westerners' view toward China develop? The Chinese tend to believe its old saying, "Peaches and plums do not talk, yet a path is formed beneath them," meaning a person or a country of true worth attracts admiration naturally. China pursues to tell its stories well to the globe. More importantly, it has good stories to tell, and will endeavor to create more of them. Western people, young or old, will see what a real China looks like sooner or later.