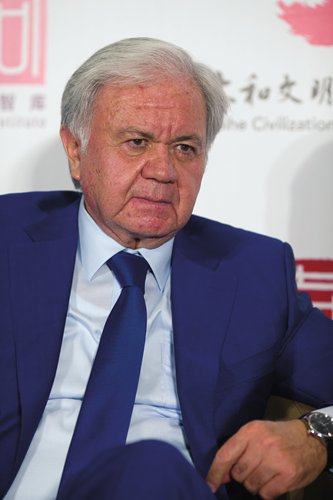 Editor's Note:The Shanghai Cooperation Organization (SCO) Peace Mission 2018 was held in Chebarkul, Russia, in August. Both Indian and Pakistani soldiers participated in the counter-terrorism drill. It's the first time that the two countries are in the same camp in a military drill. Is the SCO changing the regional political landscape? What role is the SCO playing in the current chaotic world? Global Times (GT) reporter Li Aixin talked to Rashid Alimov (Alimov), SCO Secretary General, over these issues.

GT: Some observers say the SCO is helping improve India-Pakistan relations and is hence changing the political landscape in the region, what is your view?Alimov: There is nothing incredible about both India and Pakistan participating in the SCO's counter-terrorism military drill. Both India and Pakistan are member states of the organization and as member states they take part in all kinds of cooperation within 29 SCO cooperative mechanisms.Undoubtedly, the membership of India and Pakistan in the SCO widened the opportunities of the organization and its potential to fight against terrorism and extremism as well as added new dimensions to the economic and humanitarian cooperation. Today both states are an integral part of the SCO. If some experts and scholars in their analysis try to separate these two countries from the SCO, they will be mistaken.I wish to remind that over the past 12 years, India and Pakistan had been observer states of the SCO and after such a long period they became full members in 2017.

GT: How do you comment on the SCO's work after the induction of India and Pakistan? Are there any challenges and breakthroughs?Alimov: There is one important aspect that cannot be ignored. India and Pakistan had been working with the SCO for 12 years before and regarded as "SCO family" states. We've been together all this time. The only difference from now was that they had not participated in the decision-making process. But they had attended all summits and high-level meetings of the organization. To my mind, the SCO is like a river and India and Pakistan now are among its two main tributaries. The two countries had contributed to the SCO before and now their contributions are multiplying. India and Pakistan have great potential to collaborate in every cooperative field within the framework of the SCO.After the Astana summit of the SCO in 2017, the predictions of some experts, such as the SCO will face new challenges and its power will be weakened due to tensions between New Delhi and Islamabad, have gone with the wind. It became clear after adoption of the 23 cooperation documents during the 18th SCO summit in Qingdao this year which set a record in the history of SCO Summits. Probably, you know that the signing of any document of the organization requires consensus among the eight member states. Of course, it means common efforts, but much depends on the presiding state. So China did its utmost during its presidency in the SCO to provide the smooth work in finding the best solutions for common interests and for the organization on the whole. Frankly, nobody expected such fruitful results. All the documents specify cooperative guidelines of the eight states for the coming years.Actually they touch upon all aspects of collaboration within the organization, including the fight against terrorism, drug trafficking, ensuring food safety, tourism development and more importantly, the approval of a five-year action plan for implementing the Treaty on Long-term Good Neighborliness, Friendship and Cooperation. As it was not so easy for all eight countries to reach consensus in so many aspects, the results show the power of the SCO - the power of the international organization of a new type. In the SCO, the voice of every member state can't be ignored, it is heard and taken into consideration. I would say the SCO is like a concert, in which every instrument has its say and own characteristics. This is what distinguishes the SCO from other international organizations. Now India and Pakistan are an inseparable part of the orchestra.

GT: Some observers tend to treat the SCO with a geopolitical perspective and compare the SCO to NATO or the EU. What is your view on the comparison? They also like to discuss Turkey's possible membership in the SCO. Is it possible for the organization to accept a NATO member as a full member of the SCO in the future?Alimov: As I already mentioned the SCO is a new type of international organization and can hardly be compared with other organizations. It is not a NATO in Asia, because it is not a military bloc. Our military exercises mainly focus on counter-terrorism. It is the responsibility of the SCO to provide peace and stability of the region in between Arctic Ocean, Indian Ocean and Pacific Ocean, which is home territory for nearly half of world's population. To reach the goal helps build mutual trust among leaders of all member states.In terms of SCO's expansion, the organization just went through its first rounds of enlargement. Currently, our primary target is to help new member states to be better integrated into the group and all forms of cooperation. For the movement, the SCO has received applications from 10 nations to become the organization's full members, observer states or dialogue partners. Turkey is currently a dialogue partner of the SCO. What will happen in the future? It depends on the joint decision of all SCO member states.

GT: We are now witnessing almost all major powers worldwide being caught up in disputes or controversies. What consequences will such trend bring to the world?Alimov: The world is going through a very complex phase. Major changes in international relations have been taking place since the millennium. The unipolar world is now behind us and a multipolar globe is taking shape. For the moment, it is crucial to protect the trend from suffering major losses or going to the extremes. Thanks to the policies of good-neighborly cooperation, the SCO contributes to the common wealth and prosperity.

GT: China and Russia are both SCO members and are getting closer amid rising conflicts in the world. What impact will the bilateral relationship have on the region and the globe?Alimov: The Russia-China partnership is playing a positive role in the entire world. Ties between the two countries have lasted for 400 years. No other nations have had such a long history of relations. Leaders from the two sides also enjoy high-level mutual trust. Historical, economic and cultural ties of the countries also bind the two societies together. Russia and China have become role models of cooperation between world's major powers and are thus playing the role of bringing stability to the world.