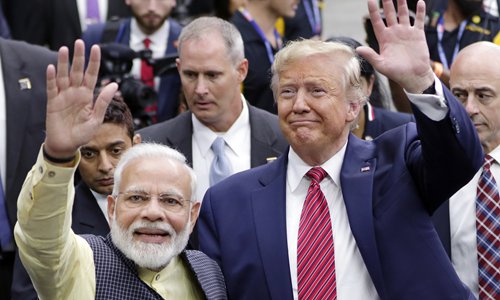 However, it is uncertain whether Canberra and New Delhi will completely follow in the footsteps of Washington. Amid escalating strategic competition between the US and China, both Australia and India have to carefully handle their ties with the two largest economies in the world.

Lacking either willingness or capability, India and Australia, as two important pillars, will somewhat weaken the strategy's effect. Therefore, if Washington wants to improve the strategy, it has to woo Canberra and New Delhi to its camp.

India's geopolitical location and strategic role are very important to the US Indo-Pacific Strategy. Three reasons show why India is part of the plan.

Second, India wants to offset China's increasing influence in South Asia and the Indian Ocean region. It is wary of China as it feels threatened by the rise of China and the China-proposed Belt and Road Initiative.

Third, participating in the US Indo-Pacific Strategy can help India better integrate into the Asia-Pacific region. As the region's role acquires center stage in world strategy, New Delhi doesn't want to be an onlooker. It views the Asia-Pacific region as an opportunity for economic growth, and integrating into the region is an important diplomatic issue for New Delhi.

However, there is divergence between New Delhi and Washington. Unlike Japan and Australia, Indian is not an ally of the US, and it keeps a certain distance from the US Indo-Pacific Strategy.

New Delhi wishes to make the Indo-Pacific region open and inclusive. It doesn't want a confrontation with China. It prefers an Indo-Pacific Strategy that puts emphasis on both security and economy rather than one simply targeting China.

Australia is strongly upholding the Indo-Pacific concept. As a middle power, Australia still tilts to the US in security affairs but doesn't want to be a Washington puppet in terms of diplomacy and politics.

Meanwhile, Canberra also is facing a dilemma over joining the US Indo-Pacific Strategy. In security and politics, Australia is becoming more vigilant about China, but it cannot sever trade ties. The country's economic well-being to a great extent depends on stable trade ties with China, while Australia simultaneously relies on the US for a secure environment. This has led Canberra into a dilemma on picking sides.

Australia could damage ties with China by helping promote the Indo-Pacific Strategy, while it cannot be at ease with the US due to the Trump administration's whims and fancies. Through the Trump-Morrison meeting, the US undoubtedly wished to consolidate its alliance with Australia.

In an era in which equations among different countries are increasingly complex, the US is unable to achieve consensus in containing China. Both India and Australia attach great attention to China-US relations. They don't want to pick sides when there is escalating competition between the world's two largest economies but rather seek a dynamic balance. This has led to differentiated US-India and US-Australia interests and strategic choices.

If the US fails to award relevant countries with maximum profits, these countries such as India and Australia won't spare any effort to back US Indo-Pacific Strategy. However, it is a difficult task for the Trump administration, which is oriented to the "America First" policy, to mobilize other countries, as lip-service won't work.