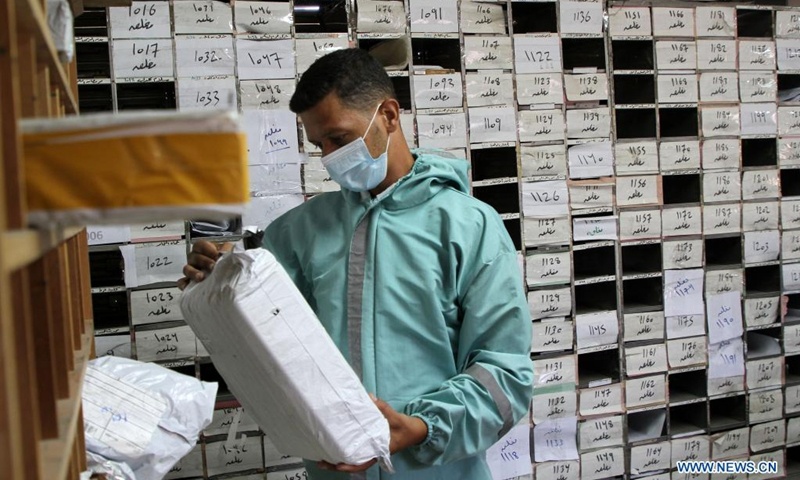 A Palestinian man works at the main Gaza Post Office in Gaza City, on June 22, 2021. For the second day in a row, dozens of trucks loaded with agricultural goods and clothes arrived at the Kerem Shalom commercial crossing in the southern Gaza Strip. These goods from Gaza were allowed to be exported to the West Bank and Israel.(Photo: Xinhua)

Israel, which has the highest rate of COVID-19 vaccinations, has suffered from an epidemic resurgence. What is the most worrying is that among the country's registered 148 new confirmed cases on Wednesday, about 40 to 50 percent were vaccinated with the Pfizer/BNT COVID-19 vaccine, according to Chezy Levy, director general of Israel's Health Ministry. This sends a strong signal that the immunity of the Pfizer vaccine and other vaccines in the face of Delta variant is facing severe tests.

Israel's vaccination rate is among the highest in the world, with over 55 percent of Israel's population receiving both doses of the Pfizer/BNT vaccine, which is a vaccine mainly used in the country. Israel had already breathed a sigh of relief and relaxed its controls. But now the situation is tense again. Israel has again advised people to wear masks indoors and may further strengthen its control measures. This comes on the heels of unfortunate news. For example, nine fully-vaccinated teachers contracted the COVID-19 in two schools of a town in Israel, and three fully-vaccinated members of the Israeli Defence Forces were also infected.

The UK is also one of the Western countries with the highest vaccination rates, but it has been more severely impacted by the Delta variant strain. Its single-day confirmed cases have risen to more than 18,000 again, and the average infection rate even exceeds that of India today. This also affects people's confidence in Western vaccines' protection ability.

Alon Rappaport, Pfizer's medical director in Israel, said on Thursday that the Pfizer/BNT vaccine is "very effective, around 90 percent," in preventing COVID-19. But he also admitted the data was partly accumulated from research conducted at the lab.

The vaccine's ability to reduce severe illness and break the link between infection and death in the vast majority of cases remains the judgment of most experts and doctors, and has been confirmed by many new infection cases. The vaccine must have had a considerable repression effect, otherwise Israel and the UK would probably have been in a much worse situation given the high contagion of the Delta variant. This means getting vaccinated is extremely important.

More and more vaccines are being developed around the world, with some medium-sized economies also trying to develop indigenous vaccines. Each vaccine can have a certain protective effect, but experimental data can only be used as a reference. It still needs to go through the next autumn and winter seasons, and a wide range of tests to see which vaccine's actual protection rate is higher or safer.

Looking at countries around the world, I feel that human's struggle with the novel coronavirus will be much longer than we once anticipated. In addition to relying on vaccines, organized mass prevention and control arrangements based on epidemiology will be important. Only vaccines combined with this kind of mass prevention and control can bring the epidemic under complete control, as has been the case in China. However, as China is an exception in the world, we will face a complicated global pandemic prevention situation for a long time. The future will be full of uncertainties. We must firmly keep this initiative in our own hands.