OPINIONS Conflict of interests hard to hide in EU-US summit

Conflict of interests hard to hide in EU-US summit 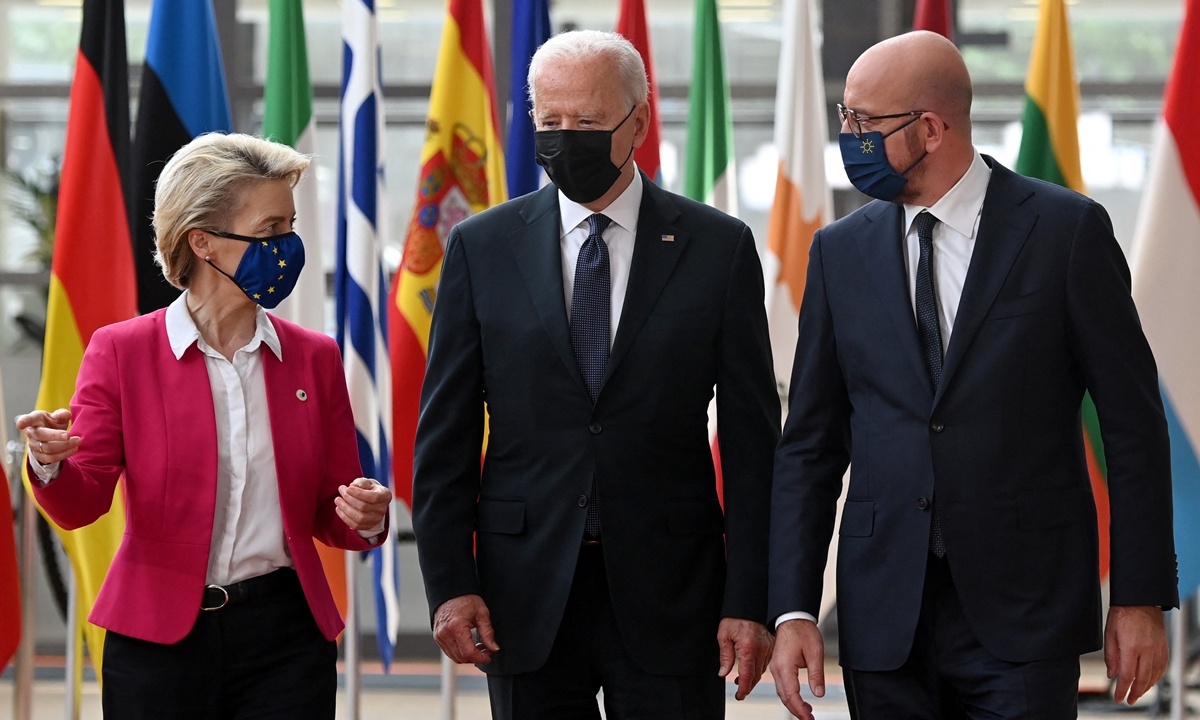 US President Joe Biden attended the EU-US summit on Tuesday as the last highlight of his visit in Europe, which aimed at showing a new outlook of transatlantic relations and bring the bloc closer to its anti-China front before his summit with Russian President Vladimir Putin. Some believe this tactic by the US has had some effects, pointing to the G7 summit's harsh stance on China and the NATO communiqué that designated China as a "systematic challenge" to international order.

However, Chinese observers said it is expected that Tuesday's summit on more specific areas concerning development and immediate interests would expose divergences and conflicts between the US and Europe, demonstrating the fragility of "symbolic solidarity" in values and ideology in the previous two events.

The EU-US summit, the first of its kind under the Biden administration, is expected to put COVID-19 pandemic, China, trade tariffs, technology regulation, climate change and democracy on top of the agenda, Euronews reported.

Some Western news outlets have presented a rosy atmosphere of the summit, depicting it as a chance to rebuild US-EU relationship. But they also had to admit the existence of conflicts, including existing steel and aluminum tariffs imposed by the Trump administration and EU's countermeasures. Vaccines and the Northern Ireland situation after Brexit are some of the sticky points in the dialogue, media reported.

Cui Hongjian, director of the Department of European Studies at the China Institute of International Studies, told the Global Times on Tuesday that the EU-US summit is an occasion where the two try to manage differences and reach consensus, solving down-to-earth problems. EU has concrete demands for the US and if the latter fails to meet them, the bloc will further distance itself from the US.

With its recent decision to delay the implementation of digital-tax tariffs for up to 180 days and a new agreement on a multiyear-long aircraft subsidy row between the US and the EU, the Biden administration has gone to great lengths to create a collaborative atmosphere for a superficial consensus with the EU, likewise on democracy and human rights, experts said.

A consensus like that is essentially fragile, as the moves intended to downplay bilateral frictions would by no means conceal their discrepancies, especially when it comes to trade ties with China, Gao Lingyun, a trade expert at the Chinese Academy of Social Sciences in Beijing, told the Global Times on Tuesday.

Instead of entirely following in US' footsteps in fanning the China threat theory, EU member states including Germany and France are striving for a balance between their relations with the US and their ties with China, without putting their economic interests with China at stake, according to Gao.

China's exports and imports with the EU denominated in the US dollar soared 38.7 percent year-on-year in the first five months, per Chinese customs data, China's trade with Germany posted a 35.7 percent increase during the period, while its trade with France rallied 43.9 percent.

China and the EU are more complementary in trade, especially when considering the readily availability of road transport compared with ocean shipping that has been rising in prices and requires a much longer time, trade experts noted.

A total of 2,213 freight trains were dispatched between cities in China and Europe between January and February, a rise of 96 percent year-on-year. The amount of goods delivered was also significant at 209,000 TEUs (Twenty-foot Equivalent Units), up 106 percent year-on-year, according to latest data from China State Railway Group Co (China Railway).

In another sign that the US and the EU are at variance, French President Emmanuel Macron said Sunday at the end of the summit of G7 leaders that the grouping is not a club that's hostile to China, media reports said.

"China is an economic rival from whom we expect the full respect of (international trade) rules," Macron said.

A communiqué issued after the G7 summit read, however, "with regard to China, and competition in the global economy, we will continue to consult on collective approaches to challenging non-market policies and practices which undermine the fair and transparent operation of the global economy."

Reckoning Germany and France as largely a positive force pushing for progress on the China-EU investment treaty, which is now in limbo as Brussels moves to suspend ratification efforts amid tit-for-tat sanctions, Gao believes that the investment deal is likely to be unfrozen when the sanctions and countermeasures are simultaneously lifted.

Germany, known for its advanced manufacturing prowess, and France, for its banking and financial services, will benefit substantially from the massive investment deal if it eventually comes into force.

China's Minister of Commerce Wang Wentao said during his talks with French Foreign Minister Jean-Yves Le Drian during an online meeting in late May that he hoped France would play a positive role in promoting the signing and entry into force of the Comprehensive Agreement on Investment (CAI) at an early date.

Britain, for its part, is also betting on closer economic ties with Asian-Pacific markets, notably China, to prop up its economy, particularly as Britain and the EU show little signs of defusing a post-Brexit trade dispute, regional affairs watchers said.

In the words of Gao, Britain is trying to maximize its economic relations with China that's why it doesn't take such substantial anti-China measures like what Australia has done -- tearing up Victoria's Belt and Road agreements with China -- although London continues to act as a close ally of Washington.

Xin Qiang, deputy director of the Center for US Studies at Fudan University, told the Global Times on Tuesday that though both sides hoped to repair ties, cracks and mistrust that emerged from the Trump administration cannot be fixed through one single tour. Moreover, the costs for different countries to join the US-led rivalry against China are different and the US cannot and will not compensate for their losses, Xin noted.

Before the EU-US summit, Biden also attended the NATO summit meeting on Tuesday and the G7 leaders' summit which concluded on Sunday.

The NATO communiqué designated China as presenting "systematic challenges" to international order, citing China's expansion in its nuclear arsenal, being "opaque" about military modernization and military cooperation with Russia.

NATO chief Jens Stoltenberg warned China was "coming closer" in military and technological terms but he stressed the alliance did not want a new Cold War with China.

The claims sparked firmly hit-backs and both Chinese Foreign Ministry and its Commission to EU said the Chinese people will never forget the NATO bombing of the Chinese Embassy in Yugoslavia.

The Commission said NATO's claims have slandered China's peaceful development, misjudged the international situation and its own role, and continued the Cold War mentality mixed with group politics.

The NATO, born from an era of ideological confrontation, puts China into strategic view so that it can prove its relevance in the current world, Cui said.

The alliance wanted to use US-China rivalry to argue its political dimension beyond the traditional military and security dimensions, while the US wanted to weaponize NATO in its toolkit against China, the expert said.

Closing on Sunday, the G7 leaders' summit, with the US and some European countries at the core, also played ideology and values card in forming a so-called united front in bashing China in an attempt to maintain global governance.

Almost every issue on which Washington has recently attacked China has been mentioned in the G7 communiqué, but attitudes were expressed in different degrees of tone.

CNN reported that the seven leaders aired serious differences over how best to approach China during a session of the G7 summit. German, Italian and European Union leaders in particular, opposed dealing with China in a confrontational manner.

Michele Geraci, former undersecretary of state at the Italian Ministry of Economic Development, told the Global Times that it is a challenging task for Italy to strengthen economic ties with China on one hand and reaffirm alliance with Europe and NATO partners on the other.

The two are not really in conflict, the problem is that certain people are using the geopolitical alliance as an excuse to hurt the Chinese economy, which will hurt Italian and European companies and lead to a lose-lose situation, Geraci said.

Commenting on recent interactions of China, US and EU, Zhao said at Tuesday's press conference that cooperation far exceeds competition and consensus far exceeds differences in China-EU relations. We are two major forces in the multi-polar world, and China hopes the EU will strengthen its autonomy, not to be hijacked by the US which wants to use ideology to create an anti-China clique.