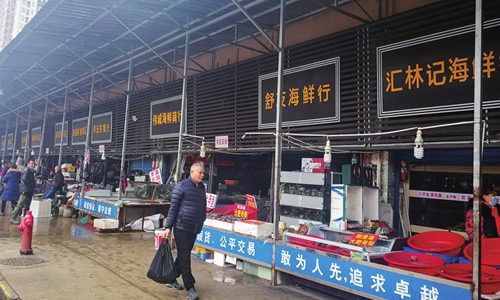 The Huanan Seafood Market in Wuhan, capital of Central China's Hubei Province and the epiccenter of the novel coronavirues, is believed to be the origin of the virus. (Photo: Global Times)

Monday was the first trading day of China's stock market in this lunar Year of the Rat. As anticipated, both the Shanghai Composite index and the Shenzhen Composite index tumbled, 7.72 percent and 8.45 percent, respectively.

The Chinese economy has encountered a temporary but severe blow. A large portion of the services sector has shrunk, transportation canceled, and shopping centers and restaurants almost have no business.

Nonetheless, although China has adopted top-level preventive measures, most of the country has remained orderly. The country and society have been functioning. The services sector that relies heavily on consumers is facing enormous pressure, and many enterprises may suffer losses or even have to close. Assisting these companies to overcome the hardship should be a primary concern of the country's macroeconomic regulation and local governments' policy orientation. On Sunday, Suzhou issued 10 policies that would aid small and medium enterprises to weather the hard times. Such swift response is worthy of praise.

The most urgent task right now is to put the epidemic under control, which will not only bring public confidence in defeating the virus, but also reshape the vitality of the Chinese market.

We call for joint efforts of the public. During the fight against the virus, different companies should shoulder different loads. It is unrealistic to standardize the losses of all through a single policy, but the central government and local governments should implement preferential policies for companies that suffer greater losses. Ensuring the life of these companies means ensuring employment and social stability. It has both economic and political implications.

Some social economic activities have not stopped. For instance, people can still fill up their cars at gas stations. Medical necessities have always been available. The production and transport of vegetables is ongoing. But for some public venues such as cinemas, if the epidemic is not effectively contained, people will just pass by.

After all, it is essential to put the situation under control. When the infectious cases across the country are greatly reduced, when people are less likely to get infected by taking trains and planes and when people can be cured if infected, economic activities will resume. During the SARS outbreak in 2003, many feared that people would still feel panic even after the epidemic was contained. But the reality was that as long as the situation improved, the services sector will bounce back.

The country did right by adopting top-level preventive measures as the short-term pain to avoid the epidemic from exploding and spreading. This has effectively placed public fear under control. There would be no modern economy if people live in fear. The country's measures do not mean that it attaches no importance to the services sector any more, but serve as a way to restore the once prosperous services sector. We may have paid a big price, but they might be the least costs we have paid to safeguard the Chinese economy in the year of 2020.