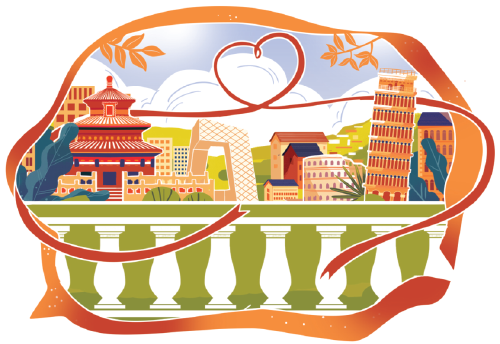 When President Xi Jinping visited Wuhan, capital of Hubei province, on March 10, it signaled that China's efforts to contain the coronavirus had paid off and the worst was believed to be over. For Italy, the contrary has happened, and the situation has worsened to the extent that government has declared a nationwide lockdown after the number of infected citizens reached more than 10,000.

Not long before, China had been subject to wide international criticism for the toughness of its containment measures in Wuhan and Hubei province. But after the rapid spread of the novel coronavirus worldwide, and the World Health Organization declaring it a pandemic, China's containment and mitigation strategy is no longer subjected to criticism.

If Italy was the first country to impose a nationwide lockdown, partly enacting measures already implemented by the authorities in Wuhan and Hubei province, the approach now seems to have become the model for the entire European Union, although not all countries are complying in the same manner and at the same speed.

However, at this stage, limiting people's physical interactions is probably the only viable option to slow down the spread of the virus and avoid the collapse of national healthcare systems. Way before this epiphany occurred, the WHO after its fact-finding mission in China in February, remarked that "China has rolled out perhaps the most ambitious, agile and aggressive disease containment effort in history". In their comprehensiveness and toughness, China's efforts to contain the virus have now gained international recognition for their success and become the model for tackling the spread of the virus.

In locking down Hubei province and swiftly mobilizing medical personnel to converge there, along with the swift construction of makeshift hospitals, China succeeded in preventing the virus spreading freely from Hubei to other provinces, preventing a potential catastrophe for China's healthcare system nationwide. Importantly, it should be remembered that all this occurred on the eve of the Chinese New Year, a national holiday that entails the largest human migration in the world, involving hundreds of millions of people.

It seems again a lesson to be learned carefully by Italy, where the poorer Southern regions lag way behind the North of the country in terms of facilities and number of medical personnel and intensive-care beds. The bottom line here is that, if the novel coronavirus hits Southern Italy as it did the North－and it is worth noting that Emilia-Romagna, Veneto and most of all Lombardy, which are the epicenter of the outbreak in the country, have the best healthcare facilities in Italy－the risk of a collapse of the healthcare system in those regions is real and that has catastrophic implications for the national healthcare system and the safety of the population. It is not to be forgotten that, when news of the lockdown measures to be implemented only in Lombardy were improperly leaked by the press before their final approval, tens of thousands of migrant workers and students literally assaulted train and bus stations－mostly in Milan, the region's main city－to return to their hometowns in the South, which could result in the spread of the coronavirus to Southern regions. Here also there is much to learn from China, where the population demonstrated commitment, responsibility and cohesion in complying with the painful but necessary measures. As the WHO has recognized, the Chinese population demonstrated "an exceptionally high degree of understanding and acceptance of these measures" and a profound commitment to act in a collective manner in order to tackle a common threat.

Last, but certainly not least, a lesson Europe and Italy should learn thoroughly if they want to turn the ongoing crisis into an opportunity, is provided by China's commitment to global solidarity and cooperation. After a phone call between China's Foreign Minister Wang Yi and his Italian counterpart Luigi Di Maio, a charter flight from China arrived in Rome in the night of March 12, carrying nine Chinese medical experts in the fight against coronavirus and tons of medical equipment such as 100,000 high-tech masks and 20,000 protective suits, 50,000 swabs and 1,000 pulmonary ventilators. At the same time, videos and messages of support from Chinese people have spread on social networks, websites and news outlets, making Italians acquainted with "Zhongguo Jiayou" (Stay strong, China) and "Yidali Jiayou" (Stay strong, Italy). All of that was happening while other EU countries were shutting their borders with Italy and EU institutions took quite a long time to agree on a clear and reasonable financial commitment to help the country mitigate the catastrophic effects of the coronavirus on its already unsteady economic system.

As the global scale of the novel coronavirus outbreak was no longer a matter of debate, China made quick and concrete actions to help Italy. A lesson to be learned, remembered and replicated every time the need arises.