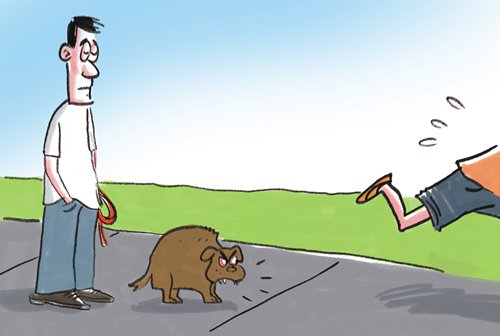 A recent article - "Leash your dog - Isoniazid forces people to raise their dogs in a more civilized way" set the Chinese internet ablaze. The author introduced an antibiotic, Isoniazid, which is mostly used for the treatment of tuberculosis with apparently no major side effects for humans but can effectively put dogs down. Then he suggested people scatter sausages laced with Isoniazid randomly in their neighborhood so as to kill pet dogs which are not leashed.According to the article, the "antagonism" between human beings and dogs in China is fierce, making the fear of being bitten by dogs all-pervasive. The writer believes that even the chief culprit of the country's latest rabies vaccine scandal is the leash-free dog. So, he thinks once there are poisoned sausages everywhere, dog owners would be forced to keep their dogs on a leash. Quite a few dog haters commented on the article, saying they would love to try it. There have lately been some cases of dogs killed with poisoned sausages in China. Since dogs without leash had been targeted, the controversial practice was widely cheered on the internet. Those supporting it may have never raised a dog. They do not know that even if a dog is on leash, its owner can hardly prevent it from swallowing sausage hidden in the grass - it may happen in a second. The idea soon triggered a firestorm led by dog lovers. "You can kill my dog if I failed to put it on a leash, then can I crash your car if you did not park it at the right place?""Antagonism" between human beings and man's best friend never existed. It is the contradiction between reckless dog owners and others. Dog haters cannot imagine how one can possibly love such a dreadful creature with fangs. They hate dog owners keep saying their dogs don't bite - how can they guarantee that?Dog lovers, on the other hand, cannot imagine how one can possibly hate such a lovely creature, because they know that a dog can love you more than he loves himself. The latest debate shows how deep the divide between dog lovers and dog haters is in China. It evokes the memory of animal activists flocking to the highway to stop a truck carrying dogs to be slaughtered for meat and a recent tragedy in which a woman attempted suicide after her family was harassed by netizens following her husband's killing of a neighbor's dog that bit their toddler. Such practices support the theory that violence must be met with violence. Likewise, those who back the plan to poison dogs do not have the nerve to confront reckless owners, so they choose to harm every dog they might encounter. They don't dare to fight for their rights through civilized means and eventually settle on a way that can achieve nothing but create fear and rifts. The only suitable way to change how people walk dogs in public places is not punishing wayward dogs which scare people, but their owners. If dog haters can spend more time and energy in popularizing the significance of raising well-behaved dogs to dog owners, encouraging them to abide by rules for dogs in public places and popularizing legislation and supervision, they will surely receive a more positive feedback rather than raging contradictions. It is also worth drawing on other countries' experience. For instance, introducing laws requiring pet owners to pay massive fines for dog attacks, asking them to evaluate their pets' temperament and use a dog muzzle, promoting dog training programs, etc. Above all, it must be made sure that all related regulations must not exist only in name.As a dog owner, words cannot describe how much I love this adorable creature. But I also hate people who refuse to walk their dog on a leash. If their pet dog pounces on my family, I can hardly stay calm either. It is hoped the controversy would be resolved by legal measures, instead of resorting to cruel ways. Dog owners who disregard leash-laws are somewhat like an illness in the neighborhood. But when you face a patient, even if he is very sick, would you recommend the right medicine, or pass him a poison pill?