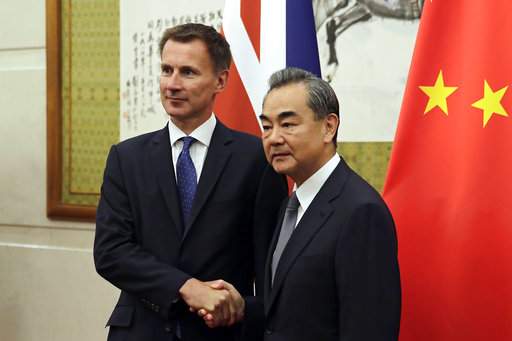 The new British foreign secretary, Jeremy Hunt, visited China on Monday. As the UK wonders whether a soft Brexit is possible and amid discussion of the fading UK-US "special relationship," Hunt's visit shows how much attention London pays to China-UK relations.

Although the "golden era" between China and the UK under former prime minister David Cameron is still mentioned, their relationship is not like before.London's attitude toward Beijing is typical in Europe. The UK takes China seriously, which is subject to its politics and psychology nonetheless. It admits China's power and acknowledges the strategic benefits of cooperation with China, but it has misgivings about China's ideology and is vigilant about the "China model." It seems that China-UK relations are stable, but there may be new problems at any time.

Before Hunt's visit, some British politicians called on Hunt to bring up Hong Kong during his discussions with Chinese leaders. There have also been reports that Britain is to send HMS Queen Elizabeth to the South China Sea as a "freedom of navigation" exercise. The UK has also announced a new policy document which sets tighter rules on foreign investment. People believe that the document mainly targets China. Hunt's trip to China helps the two countries seek stable China-UK cooperation. It makes people rethink how issues that harm their relationship should be controlled, and whether control is realistic.The common interests of China and the UK are far greater than their differences. China's rise has strengthened the world's multi-polarization, which will provide the UK with ample room for strategic maneuver and thus benefit the UK.The UK is unable to rise again to the apex of power. Nor will other European countries. It would be a smart strategy for the UK to avoid being an appendage to a single superpower in a multi-polar world and build constructive relations with major forces. The UK should be rational enough to prevent its human rights dispute with China from undermining bilateral relations. Similarly, London needs to exercise restraint in commenting on Hong Kong-related issues in case it is manipulated by Hong Kong extremists to have diplomatic skirmishes with Beijing.It is the UK that started almost all clashes with China, be it the nuclear power station, the South China Sea or the Hong Kong issue. China is more often a stabilizing power in Sino-UK relations. We hope that China-UK relations can become strategically stable earlier than China's ties with other European countries. If the UK still pins its hopes on a special relationship with the US, it will be unable to tap its potential as an older major power. Stronger ties with China will put the UK in a better position strategically. China and the UK are supposed to be strategic partners committed to making the world a better place. They should join hands to safeguard the basic rules of international relations, promote world peace and prosperity in the 21st century. With huge potential, Sino-UK cooperation will drive the economic and societal development of the two countries and have bright prospects.