OPINIONS Cornerstone of China's strategic deterrence against the US: more nuclear missiles and warheads

Cornerstone of China's strategic deterrence against the US: more nuclear missiles and warheads 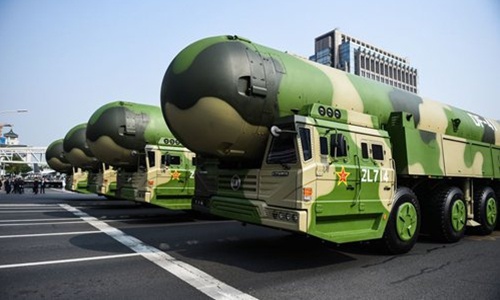 A formation of Dongfeng-41 intercontinental strategic nuclear missiles takes part in a military parade celebrating the 70th anniversary of the founding of the People's Republic of China in Beijing, capital of China, October 1, 2019. (Photo: Xinhua)

As the US strategic containment of Chinas has increasingly intensified, I would like to remind again that we have plenty of urgent tasks, but among the most important ones is to rapidly increase the number of commissioned nuclear warheads, and the DF-41s, the strategic missiles that are capable to strike long-range and have high-survivability, in the Chinese arsenal. This is the cornerstone of China's strategic deterrence against the US.

We must be prepared for an intense showdown between China and the US. In that scenario, a large number of Dongfeng-41, and JL-2 and JL-3 (both intercontinental-range submarine-launched ballistic missile) will form the pillar of our strategic will. The number of China's nuclear warheads must reach the quantity that makes US elites shiver should they entertain the idea of engaging in a military confrontation with China.

On this basis, we can calmly and actively manage divergences with Washington to avoid a minor incident sparking a war. US hostility toward China is burning. We must use our strength, and consequences that Washington cannot afford to bear if it takes risky moves, to keep them sober.