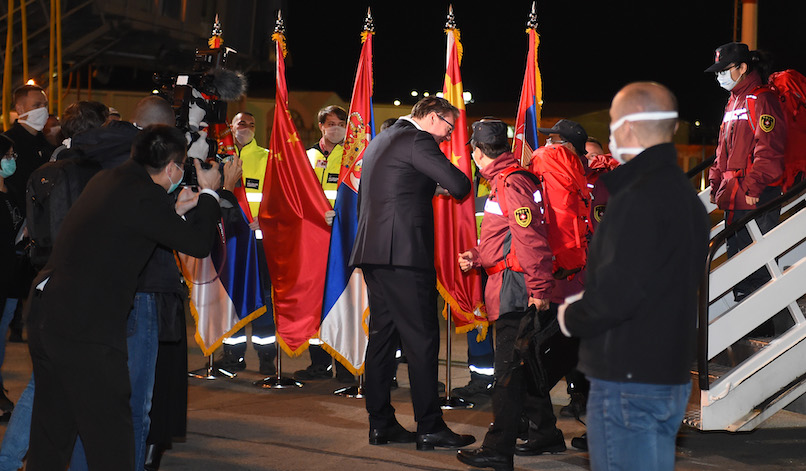 Editor's note: The author is a PhD candidate at the Faculty of Political Sciences, University of Belgrade and President of the Foreign Affairs and Regional Stability Institute. The article reflects her views, and not necessarily those of the People's Daily app.

When the World Health Organization proclaimed the coronavirus a pandemic, it was clear that this crisis will not only hit the global health sector, but will also impact all segments of society worldwide. As in wars or huge natural disasters, the pandemic put history on fast-forward. Global solidarity between peoples and nations was put to a huge test, which they failed.

In mid-March, since the coronavirus epidemic moved from Asia to the old continent,  and many western European countries were highly exposed to the disease, the European Union decided to restrict the export of certain medical supplies to countries outside the EU. This measure hit small non-EU member western Balkan countries, especially because most of them were dependent on the medical supplies. Serbia, as a formal candidate country for EU accession, found this decision very unfavorable to its health system in a huge crisis. It forced Serbian authorities to condemn it publicly and appeal to China to provide assistance against coronavirus.

With the help of the quick and responsible response of the General Secretary of the Communist Party of China Central Committee, President Xi Jinping, Serbia has successfully handled this huge health crisis.  China donated a significant amount of protective equipment and medical instruments to Serbia, and sent a group of medical experts to help it better manage the COVID-19 crisis. China also helped other European countries badly affected, such as Italy, France, Germany and Spain. It made a great diplomatic effort when it was estimated that the country was ready to offer assistance to the international community to fight the deadly virus with the most powerful weapon - solidarity. Unfortunately, even after such an act of global humanitarianism, cooperation and solidarity, some Western officials accused China of using the COVID-19 health crisis to extend its soft power in the Balkans.

Serbia, as a country dedicated to the European integration process, but which also strives to sustain extraordinary close ties with China, has found itself at the intersection of Western and Eastern influence--or at the center of competing “coronavirus diplomacies”. Strong relations between Serbia and China, usually characterized as a comprehensive strategic partnership and "iron-clad friendship", has often been criticized by the EU and the United States. They have been reminding Serbia about its obligation to harmonize its foreign policy with the 27 member states. But they have also been questioning the motive behind China’s help to Serbia at the moment of crisis. However, by demonstrating its readiness to help the international community in resolving the coronavirus crisis, China has shown its global power. We live in a multipolar world with several centers of power in the East and West.

Although it is evident that Chinese support and Serbian reaction initiated the coronavirus diplomacies of other global actors, it is also easy to conclude that many of these countries used this crisis to achieve their foreign policy objectives. For example, after Belgrade’s sharp rhetoric towards Brussels and Chinese medical equipment donations to Serbia, the EU revised its previous decision towards Serbia and prepared a donation of 94 million euro by approving the reallocation of unspent money from the Instrument for Pre-Accession Assistance (IPA) and ongoing projects for urgent needs and economic recovery. They obviously tried to use their soft power to prove that European values and solidarity are not just empty words. But they also kept influence in the western Balkans. They did that because new global actors such as China can take over the primacy in this part of the world. The same things also worried the United States, and these the main reasons why China has become the target of negative rhetoric and a disinformation campaign. But the American coronavirus diplomacy game was not as remarkable as Europe’s, probably because the US is facing huge coronavirus cases in an election year.

Competition for global influence can explain the negative narrative about China. Some EU countries as well as the US have tried to denigrate China in the world, especially in Serbia. At first glance, regarding its size and population, Serbia is a small and minor player in terms of international relations. However, it has a very good geostrategic position and great economic potential. In addition, its excellent diplomatic relations and cordial friendship with China make it very interesting to Western powers.

Relations between China and Serbia are considered a comprehensive strategic partnership, and even an iron-clad friendship.  They are the most profound state-to-state ties. They cover a wide array of areas, including mutual respect of territorial integrity, plans for trade development, and cultural, technological and scientific exchanges. Also, since it started one of the largest economic projects ever, known as the New Silk Road, Beijing invested a lot of money in Serbia. It is primarily about loans or direct financing, mostly in infrastructure and energetics which further boosted ties between the two countries.

Bilateral meetings and mutual understanding brought those connections closer and stronger. Serbia has developed excellent relations with China, which have resulted in capital infrastructure projects such as the construction of the Pupin Bridge (Zemun-Borca), the TPP "Kostolac", construction of two sections of the Obrenovac-Ljig highway on Corridor 11, and the modernization of the Belgrade-Budapest railway, which is being implemented within the 17+1 framework of the cooperation mechanism between China and the countries of Central and Eastern Europe. On top of these projects, many Chinese companies operate in Serbia. These include Zijin Mining (RTB Bor) or the HBIS Group (Smederevo Ironworks), considered the largest Chinese investments in Serbia. They are symbols of the "iron-clad friendship" of these two countries  and proof that China is becoming one of the most important pillars of foreign policy of the Republic of Serbia.