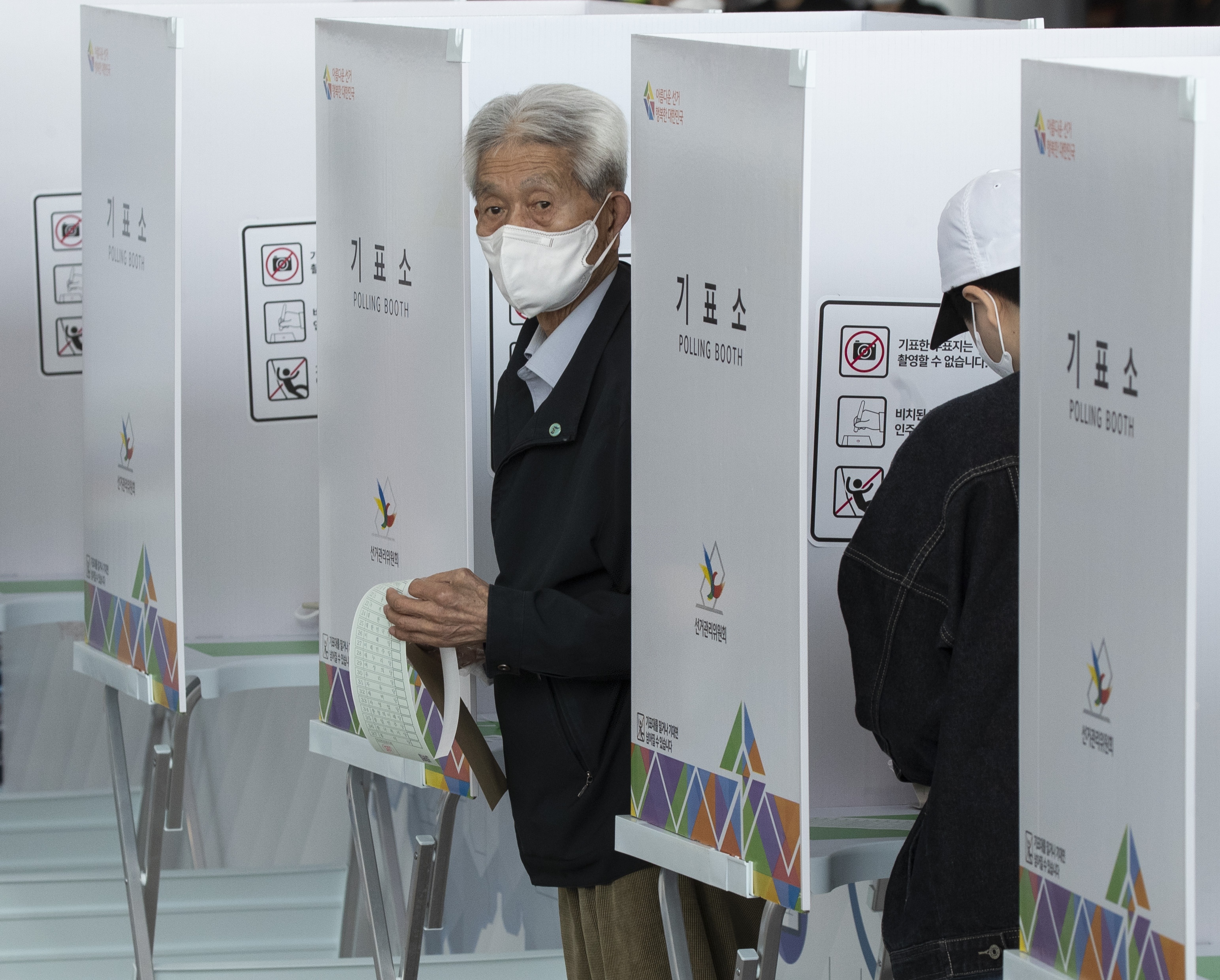 Voters fill in their ballots at a polling station in Seoul, South Korea, April 10, 2020. (Photo: Xinhua)

How quickly the COVID-19 pandemic has changed the political situation in countries around the world. South Korea is going to hold its 21st General Election to fill all 300 seats of its National Assembly on April 15, and already the issues and dynamics impacting the campaign have completely shifted.

Park Rae-yong, columnist for the Kyunghyang Shinmun, wrote in his April 6 column that this is the "corona election." Candidates have been having fewer voter contacts, and the media and voters have been laser-focused on virus, distracting from other issues.

However, while the opposition United Future Party (UFP) hoped to capitalize on the medical emergency at first, by attacking President Moon Jae-in for not blocking Chinese travelers, it has seen its narrative flipped on its head in recent weeks, as South Korea's coronavirus response has proven extremely effective. In fact, Moon's approval rating has risen in recent weeks, ending a decline stretching back three years.

In early March, South Korea's epidemic infection curve began to flatten. Since April 1, it has only recorded approximately 300 new cases, mostly imported from abroad. South Korea's policy of mass testing, contact-tracing, and cell phone updates has been widely praised around the world.

As Park put it, "The conservative opposition party and the media pushed [the image of] the government as a malevolent force. They insisted on using the name 'Wuhan pneumonia' and branded infectious disease experts as 'critical' and 'socialist.' … However, in just one month, the situation changed rapidly. Citizens saw that, in countries blocking entry from China early on, the coronavirus spread on a large scale; and realized that our country's prevention policy was not wrong. The conservative press's narrative that 'the Moon Jae-in government's quarantine policy failed' proved fallacious."

Indeed, public opinion surveys back Park's observations. An April 8 survey published in Hankyung shows Moon's Democratic Party leading the conservative UFP by a 20-point margin. The Democrats have been leading in Realmeter's national tracking polls ever since February, but they increased their lead from nine points to 13 in the final days of March, when it became clear that South Korea's coronavirus policies were yielding positive results.

The Democratic Party of Korea is also leading in most battleground districts with available polling results. Besides hanging onto most of the seats they already control, they are also threatening to take high-profile seats from the UFP and the minor parties.

For example, the Democrats are favored to win the seat currently occupied by the conservative party's 2019 floor leader Na Kyung-won, according to many polls. The Democratic nominee is in a close race against Justice Party leader and 2017 presidential candidate Sim Sang-jung.

In the progressive stronghold of North Jeolla and South Jeolla provinces, the Democrats also look poised to make big gains. Rebellious Jeolla voters elected a regional minor party, the People's Party, to fill 23 of their 28 seats in 2016, but the People's Party has since been dissolved, and most of their incumbents are losing to Democratic nominees in their respective districts.

The upshot is that the Democratic Party will almost certainly hold onto control of the National Assembly. Whether they win a majority (as opposed to their current plurality) is a trickier question, because South Korea uses a complicated formula to allocate seats on a proportional basis, and this is the first election that a new method is in place.

In regard to policy, it means that we can expect existing programs to continue for the final two years of Moon's term, which ends in 2022. A liberal president, Moon has raised South Korea's minimum wage, limited maximum hours worked per week by 23%, and pursued a policy of détente with the Democratic People's Republic of Korea (DPRK).

The Democratic Party also appears to practice less antagonistic policy towards China as compared with the United Future Party. We have seen the example of President Moon's coronavirus response, where, early on, he was criticized by the UFP for not shutting down travel from China. Moon also agreed early in his term to refrain from putting any new anti-ballistic missile systems on his side of the line dividing the peninsula.