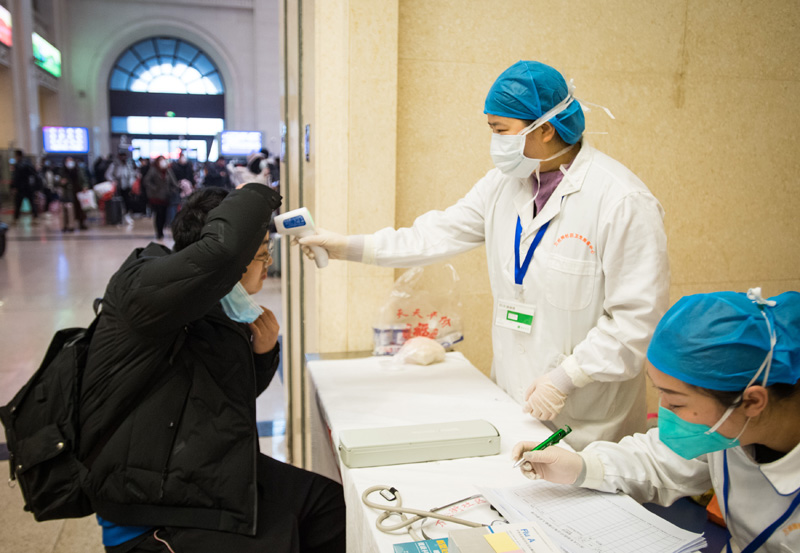 At a time when China is trying to contain the novel coronavirus epidemic, some Western media outlets have exposed their anti-China bias by claiming the situation is "China's Chernobyl".

The nuclear disaster in Chernobyl, Ukraine, in the then Soviet Union in 1986 remains the worst nuclear accident till date. It was caused by the meltdown of the No 4 light water graphite moderated reactor in the Chernobyl nuclear power plant.

Apart from the initial casualty of more than 30 people and hundreds being hospitalized for radiation exposure, tens of thousands of people were exposed to leaked radiation and the disaster resulted in tens of billions of dollars in direct and indirect economic losses. Radioactive dust and cloud from Chernobyl traveled from Ukraine to the then western Soviet Union, mainly Belarus, all the way to Europe. Ultimately an area around the nuclear plant－with a radius of 30 kilometers－was declared an exclusion zone.

Also, the Soviet authorities didn't immediately inform the residents around the Chernobyl plant or the international community about the serious consequences of the nuclear accident. The disaster raised global censure, especially because many in the international community believed the Soviet authorities didn't appropriately respond to the emergency.

By contrast, China didn't know the consequences of the coronavirus outbreak at the outset, particularly because of the local government's slow response to the epidemic in Wuhan, capital of Hubei province, in the early stages.

But order was established after the central government realized what was happening, it immediately implemented strict measures to contain the epidemic by setting quarantine norms, mobilizing the national medical corps, ordering the local government and health department to swing into action, and building two makeshift hospitals in about two weeks. And all the while, China maintained transparency as far as releasing information and updating data on the epidemic were concerned.

So, by comparing the coronavirus outbreak to the Chernobyl disaster, some Western media outlets are trying to create panic across the world and giving a bad name to China's political institutional measures when they should be focusing on working together to contain the epidemic.

It's a pity that their Cold War mentality is prompting some Western media outlets, especially those in the United States, to hype up the epidemic as part of their "China threat" fallacy even in these trying times. A report, titled "Rising to the China Challenge: Renewing American Competitiveness in the Indo-Pacific", released on Jan 28 by the Center for a New American Security, US think tank, said Western governments and companies should consider competing with China by, for instance, attacking what it perceives as the problems with Chinese institutes.

Besides, US State Secretary Mike Pompeo tried to derail the cooperation between China and countries such as Ukraine and Kazakhstan during his visit to the two countries on Jan 31 and Feb 2.

Some US officials continue to claim China poses a threat to the world, in order to fulfill their narrow political goals, even as China has intensified its fight against the epidemic. US Secretary of Commerce Wilbur Ross, for example, said on Jan 30 that the epidemic might help jobs return to the US.

Governments should accord top priority to cooperation at all times, particularly when a country is fighting a deadly disease outbreak. But some Western media outlets and politicians have been violating this long established global rule.

Since China is the world's second-largest economy, the novel coronavirus outbreak in the country has already impacted the global economy. For example, global stock markets have been volatile, oil prices have dropped because China's demand for oil has declined and exports of auto components from China have been restricted, and Nissan decided to shut down several production lines.

Yet China has taken effective measures to contain the spread of the novel coronavirus. And new cases have shown a declining trend, even as the World Health Organization has warned the risks of novel coronavirus transmission beyond China might cause serious global problems.

In short, the epidemic is by no means China's Chernobyl and the international community should work together to contain the epidemic as soon as possible so as to strengthen global security and stability.