OPINIONS Could ROK push for another summit with DPRK?

Could ROK push for another summit with DPRK? 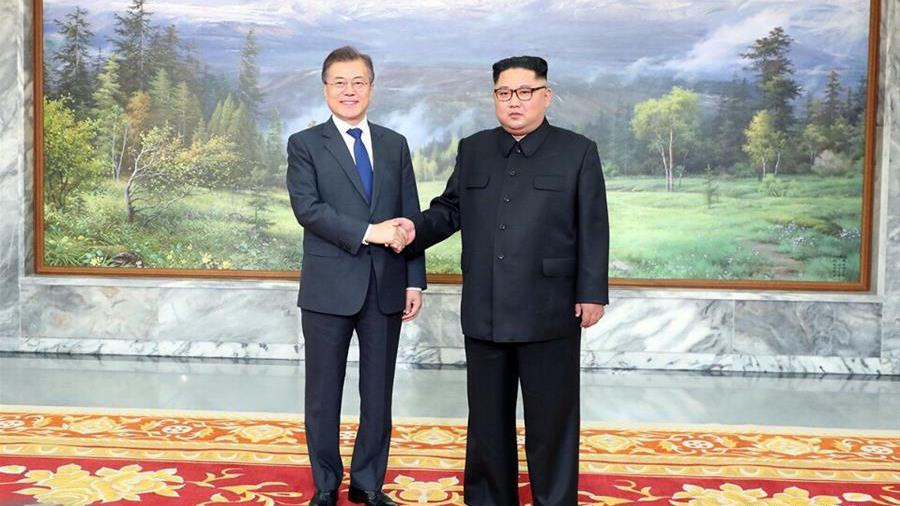 Republic of Korea (ROK) President Moon Jae-in is pushing for a fourth summit with Kim Jong Un, but it seems the prospect is grim.

Moon said Monday that he will pursue another summit with Kim “in earnest” as part of his continued endeavor to keep the peacebuilding and denuclearization dialogues alive. Moon had three summits with Kim last year that generated international attention, in the aftermath of which he was called “the mediator.”

At present, Moon is sitting on pins and needles at home and abroad, right after DPRK leader Kim Jong Un criticized him during his speech for the first session of the 14th Supreme People's Assembly for “trying to be a mediator” between the DPRK and the United States when he “has to be a stakeholder” of denuclearization talks.

Kim's condemnation of Moon's government followed Moon coming back from the United States without support from President Donald Trump for inter-Korean projects. Trump said after his summit with Moon that he thinks it is “not the right time” for inter-Korean projects such as the Kaesong Complex and that sanctions should remain installed at the moment. To this, although not explicitly, Kim responded with a speech that said he would not agree to another summit with Trump unless the United States changes its calculation and approach with a “proper attitude and a methodology” within the end of this year.

Domestically, pushing for a fourth summit with Kim is a politically high-stake but necessary bet Moon has to make at the moment. Compared to when Moon sought to break the deadlock in denuclearization talks by having a surprise summit with Kim Jong Un at Panmunjom last year, it is a harder task this time with lowering support at home. It is not news anymore that Moon's approval rating is down.

Although there are other domestic reasons including corruption scandals and unresolved economic problems, both indifference and distrust about the DPRK's denuclearization are rising not only among the conservatives but also among the centrists. According to a Gallup survey right after the Hanoi summit, 64 percent of the respondents said that the DPRK "won't give up nuclear weapons." The study showed that it is neck-and-neck even among the progressives, Moon's traditional support ground.

As the public faith in the DPRK's willingness for denuclearization continues to decrease, Moon sought to regain public support again on Monday saying that “Chairman Kim Jong Un has repeatedly declared his firm determination about denuclearization and peacebuilding through his (SPA) speech.”

However, those connotations are misleading. Although Kim did mention that the DPRK has “continuously shown the willingness to implement the June 12 DPRK-US joint declaration diligently…through meaningful measures such as the ICBM and nuclear test moratorium,” their “continued” firm determination was not Kim's main point because he criticized the ROK's determination and actions not in lockstep with theirs.

Furthermore, Kim also expressed his dwindling patience, signaling how he is ready for a prolonged battle against the US sanctions regime saying he does not “welcome nor is willing to see something like the Hanoi Summit repeat itself.”

With one of Moon's biggest promises he made as president, the inter-Korean peace and prosperity project is losing support from both left and right, Kim signaling his lowered trust in Moon's capacity is adding pressure for Moon to work this through. This was also shown in how the Blue House recently announced it will try to invite Kim to an ASEAN summit in Seoul this November after Moon failed to bring Kim to Seoul last year.

In addition, situations outside the ROK are not helping Moon at the moment either. On the same day that Moon announced his willingness to pursue a fourth summit with Kim “in earnest,” the Kremlin confirmed the ROK's Yonhap News Agency's previous report that preparations are underway for the first summit between Kim Jong Un and Russia's Vladimir Putin.

Kim's summit with Putin would not be good news for Trump, considering how Russia has been mildly distancing itself from the sanctions regime against the DPRK. For example, Russia signed a trilateral statement last November with China and the DPRK calling on the United Nations Security Council to “adjust” current sanctions regime against Pyongyang, saying that “the three parties oppose unilateral sanctions.”

Although Moon is nudging Kim for a fourth summit, Kim's patience seems to be running thin with Moon as a mediator incapable of changing Washington's current way of negotiation. Many analysts foresee that the Moon-Kim summit is likely to be aiming for April 27 or May, in a way to commemorate last year's historical summits that thawed the peninsula. However, reports suggest the Putin-Kim summit is likely to happen around April 24.

Although unlike the time when Kim visited China right after the Singapore summit to talk to Chinese President Xi Jinping, it is now increasingly possible that Kim is considering turning to his traditional benefactors instead of Moon, showing Washington that Kim has other options on his table for the “new way.”