Editor's note: Below are the remarks made at the opening ceremony of the Symposium on Maritime Cooperation and Ocean Governance by Wu Shicun, president of the National Institute for South China Sea Studies. The symposium was held in Haikou from Nov 5 to 6, bringing together over 500 participants from about 30 countries and regions, including experts, scholars, diplomats, former politicians and representatives from international organizations, either physically present in Haikou or virtually present via the online conferencing system. 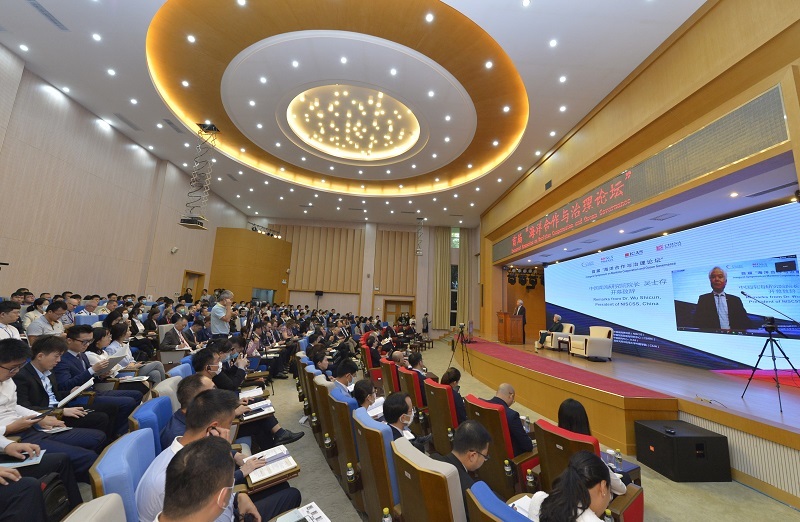 Good morning. I'd like to begin by welcoming you to the inaugural Symposium on Maritime Cooperation and Ocean Governance hosted by the National Institute for South China Sea Studies (NISCSS). At a special time when countries around the world are fighting Covid-19 and promoting economic recovery and a return to normal life, it is highly relevant and of far-reaching significance for us to gather here to discuss how to address the challenges facing the current global ocean governance and promote the sustainable development of the oceans.

Undoubtedly, human society is confronted with an unprecedented crisis in the marine environment. First, global warming has led to a rapid rise in sea levels. Global sea levels have risen by an average of about 20 centimetres since 1900 and are expected to rise at a faster rate of 3 millimetres per year. In the not too distant future, some island nations and coastal cities could face an existential threat. Second, fishery resources are increasingly depleted. 30% of the world's fish stocks are already overfished and more than 50% are fully exploited. Overfishing has not only depleted fishery resources and eroded marine biodiversity, but also brought huge loss to the global economy. Third, marine waste, particularly microplastic garbage, poses a serious challenge. About 10 million tons of plastic are ending up in the oceans each year. This has not only threatened the survival of marine wildlife and plants and the development of marine fisheries and tourism, but also exerted an irreversible impact on the marine bio-system.

Recently, I also noticed two news stories. According to The Guardian, for decades, the U.S. military operations has seriously contaminated the U.S.-controlled Pacific islands with radioactive waste, nerve agents, and chemical weapons like Agent Orange. It is even more alarming that many Japanese media outlets reported that the Japanese government was planning to release more than one million tons of contaminated radioactive water from the Fukushima nuclear plant into the Pacific Ocean by the end of this October. The Japanese authorities have suspended this decision, but this would not remove the concern that this could trigger a huge marine environmental disaster.

Apparently, some countries are not serious about the growing depletion of marine resources. Some countries even see the oceans as "the commons" for exploitation, a place without the need for investment and protection. Deglobalization and unilateralism are increasingly rampant in the United States and other western countries, which have added uncertainties and complexities to state-to-state and cross-regional cooperation on ocean governance.

Maritime disputes and competition for sea powers have made cooperation between countries increasingly difficult. In the South China Sea, unilateral actions of some countries in the region and interventions by others from outside the region have brought about worrisome new development. For their own geopolitical interests, the United States and its allies are increasingly involved in the South China Sea through forward military deployments, and political, diplomatic and economic activities, which has intensified great-power competition in the South China Sea. At the same time, some claimant countries put "maximizing their own interests" above everything else, prioritize unilateral actions in the disputed waters in the South China Sea, such as oil and gas exploration and fishing, and pursue the short-sighted policy of over-exploitation in contested waters. When it comes to such fields as marine environmental protection, search and rescue on the sea, fishery resources conservation, and navigation safety, cooperation is much said but little done.

Covid-19 has disrupted the set agenda and pace of globalization, and dealt a body blow to the confidence of the international community in global governance. Since the outbreak of the pandemic, some countries have abandoned the principle of multilateralism and turned to the beggar-thy-neighbor and selfish policy. Populism, protectionism and unilateralism are raging throughout the world. Global ocean governance suffers setbacks and faces increasingly dim prospects.

Ocean has nurtured humankind and human civilization. Ocean, a place we all call home, is a cornucopia full of resources. Global and regional ocean governance and cooperation is a shared endeavor for all that will be of great benefit to the current generation and generations to come. Therefore, I hope the Symposium on Maritime Cooperation and Ocean Governance will make its contribution to this lofty mission. With this conviction, we have the following goal and vision:

The symposium aims to establish a platform dedicated to global maritime issues, discussion on ocean governance and progress in international maritime cooperation. The platform will break down national, regional and disciplinary boundaries. On this platform, experts and academics in different sectors from around the world who are interested in this global ocean endeavor can have free academic exchanges and cooperation on marine scientific research and marine environmental protection etc.

The symposium will provide a place to attract a group of experts and academics for candid exchanges and sharing, and pool their wisdom to build an academic community for global and regional maritime cooperation.

The symposium also aims to align itself with the Sustainable Development Goal 14 of the United Nations—conserve and sustainably use the oceans, seas and marine resources for sustainable development.

It calls for the concerted efforts of everyone to realize the shared objective of sustainable development of global ocean governance and oceans. It is hoped that with this symposium as the starting point, we will contribute our wisdom and efforts to the protection of ocean—a place we all call home, to the well-being of all humanity and our future generations, to safeguarding and improvement of global ocean governance system, and to the building of a maritime community of a shared future.