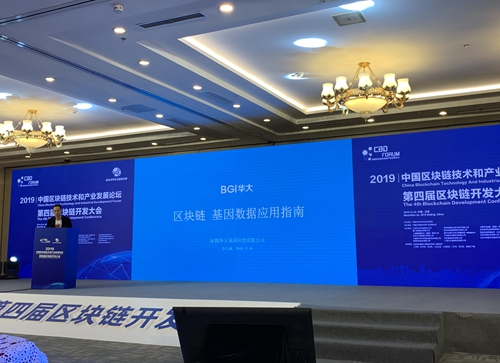 A view of an industry forum to release a serivce standard on the application of blockchain technology on tenomic data in 2019. (Photo: Global Times)

Domestic industry players are urging the wider use of blockchain technology in the global fight against the worsening coronavirus pandemic, saying that other countries could learn from China' s effective model under which the government leads and enterprises participate.

Insiders said that to boost the use of the new technology, governments in foreign countries should step in because they are rarely visible in such projects at the moment.

China has deployed blockchain technology in numerous scenarios to assist its efforts to fight the virus, for instance, in tracking the spread of the disease and compiling medical records, as well as managing charitable donations and medical supplies, and financing for small and medium-sized companies that are affected by the fallout from COVID-19.

China has taken the global lead in applying blockchain technology in gathering and sharing information about COVID-19, which offers a lesson for other countries, an industry insider who declined to be identified told the Global Times.

In contrast, most blockchain applications abroad remain limited and mainly centered on basic information sharing, according to the industry insider.

The insider noted that as part of the epidemic prevention effort, governments at all levels in China have actively engaged in or launched blockchain projects themselves, which helped fast-track the technology's wide application. But in foreign countries, local governments are usually absent from such projects.

China has also used blockchain technology to promote digital transformation in the government service during the epidemic prevention and control period. On February 5, the Market Supervision and Administration Bureau in Haidian district, Beijing said it would use blockchain technology to support online operations in a bid to reduce the number of people onsite and prevent the spread of infection.

With the first step taken by local governments, Chinese internet companies, blockchain companies, universities, and many other parties also rapidly participated in the effort, which further expanded the use of blockchain in the country's fight against the virus.

Industry insiders said that although there are differences in the use and rules concerned with the new technology, countries should strengthen cross-border mutual trust and expand use of the technology to promote the tracking, recording and sharing of pandemic information.

Blockchain is being increasingly used in the international community during the outbreak. On March 28, the World Health Organization cooperated with major blockchain and technology companies to launch a distributed ledger technology-based platform for sharing data concerning the pandemic.