The latest statistics released by Johns Hopkins University revealed that the U.S. is the most-affected country by the COVID-19 pandemic around the world. The situation strikes a chord with the Chinese people half a world away as they can feel the misery currently being felt by the Americans. 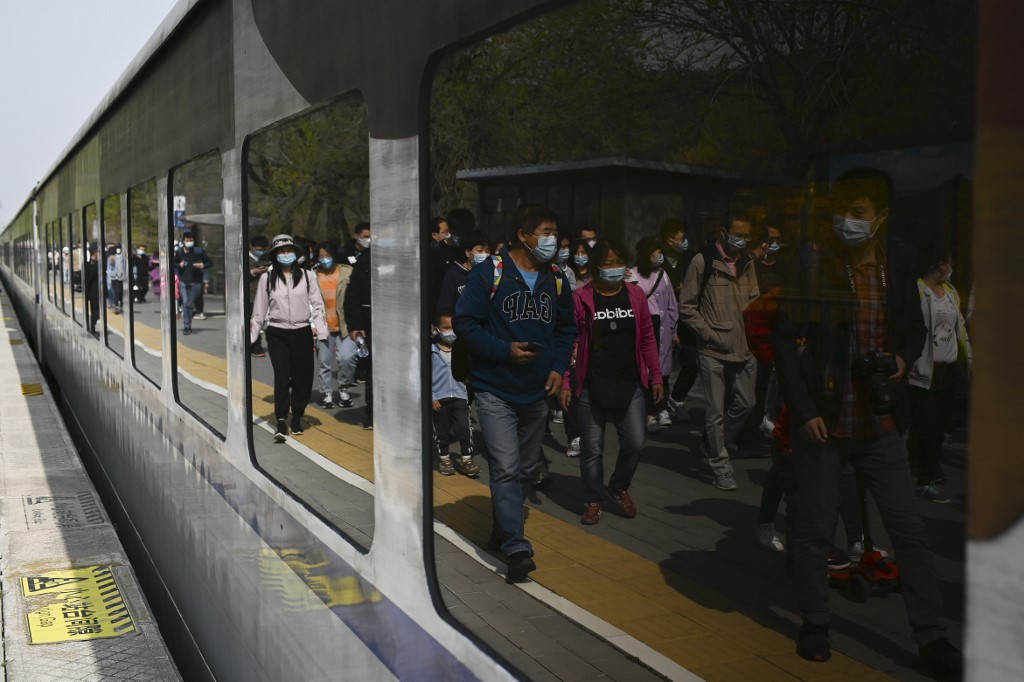 A group of visitors, wearing face masks, are reflected in the windows of a train as they arrive at a railway station near the Great Wall of China in Beijing on April 18, 2020. (Photo: AFP)

They expressed their willing to offer as much help as possible on the internet, saying the world is a “small village” where insecurity for one is insecurity for all. Such warmth reflects the genuine bond that binds people together.

However, some U.S. politicians are acting on the opposite side, which angers many. Life is invaluable, but they never see the urgency to address the health crisis, even with people crying, body bags being transferred in trucks, and people dying at home. What they are interested in is to shift their due responsibilities through political games.

U.S. media commented that some U.S. politicians focused on two things when the virus was rampant – blaming media and blaming China. Boston Globe said they have “blood” on their hands.

The stigmatization of China damages international justice. China has made open and arduous efforts in the fight against the epidemic, which is obvious to all and will never be denied by the few who smear the country’s contribution.

Secretary-General of the United Nations António Guterres expressed his gratitude to all the people in China who are sacrificing many aspects of their normal lives to prevent the virus from spreading to others. Chief of the World Health Organization Tedros Adhanom Ghebreyesus also hailed that the high speed and massive scale of China's moves are rarely seen in the world. The quick containment of COVID-19 in China is impressive and “sets an encouraging example for other countries,” said The Lancet in a recent editorial.

China’s efforts at all costs have successfully curbed the spread of the virus and saved numerous lives. However, such efforts are slandered by irresponsible politicians who only shift blames. Where is the justice?

The stigmatization of China won’t save lives. The novel coronavirus challenges people’s right to life and health. At present, it’s crystal clear that saving lives is more important than shifting responsibilities, and cooperation remains more significant than groundless accusation. However, it is not what happens with the U.S. politicians who believe making incantations like wizards can help people survive, rather than proper treatment.

The Atlantic said in an article that the White House did not take forceful containment measures at the beginning, which was a major reason for the current explosive spread.

“China did a lot of things right at the beginning, like any country where a virus first shows up,” said Bill Gates, co-chair of the Bill & Melinda Gates Foundation. “It’s sad that even the US, where you would expect to do this well, did this poorly,” he added.

The stigmatization of China impedes global efforts to contain the pandemic. As the world’s top power of economy and science, the U.S. boasts abundant economic resources, strong R&D capability and leading medical science. It should have taken more international responsibilities and helped vulnerable countries and regions while taking effective control measures at home. However, the awkward practices of some U.S. politicians would only destroy the global efforts to fight the pandemic, the consensus of building a community with a shared future, and mutual assistance.

China has always adhered to the vision of building a community with a shared future for mankind, offering assistance for other countries within its capability. Russian President Vladimir Putin pointed out that China has set a good example for the international community by lending a helping hand to other epidemic-hit countries in a timely manner.

What lies behind the stigmatizing tricks is vicious political manipulation, and this is conspicuous for both the U.S. and the international community. New York Times said that in the U.S., the response to the coronavirus is “heavily overlaid with political calculations.”

Jim O’neill, the chair of U.K. think tank Chatham House, the Royal Institute of International Affairs recently published an article titled Blaming China Is a Dangerous Distraction. “For many governments, naming and shaming China appears to be a ploy to divert attention from their own lack of preparedness. At a time when the top global priority should be to organize a comprehensive coordinated response to the dual health and economic crises unleashed by the coronavirus, this blame game is not just unhelpful but dangerous.”

The dangerous “political virus” also needs to be defeated with joint efforts from the world. United Nations Special Rapporteur on Minority Issues Fernand de Varennes warned that COVID-19 is not just a health issue, and it can also be a virus that exacerbates xenophobia, hate and exclusion. This point is well proved by the insults and even assaults on the Asians wearing masks in the West.

“It’s clear that since the outbreak was first reported, people of Asian descent around the world have been subjected to racist attacks, with untold human costs — for example, on their health and livelihoods,” Science journal Nature also echoed such point in an editorial.

The virus tests human beings’ morality and conscience for history, lives and future as the latter make choices between provocation and solidarity. It’s unquestionable that if the “political virus” keeps impacting international justice and the U.S. politicians continue taking the virus as a political weapon, the world will suffer immeasurable losses and pain, which will also leave a very dark page on human history.