OPINIONS COVID-19: Time for HK to carry out universal testing

COVID-19: Time for HK to carry out universal testing 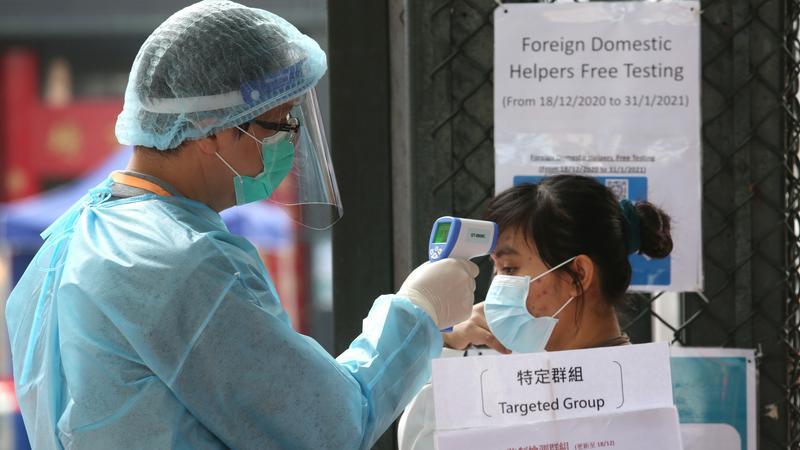 Since the fourth wave hit Hong Kong last month, the city has been facing a spike in COVID-19 infections. We have now recorded more than 8,300 cases, with over 720 originating from the infamous dance cluster. Just for this fourth wave, around 2,200 cases have been reported.

But while the city is beginning to get accustomed to the fourth wave, people from Hong Kong have to come to terms with the frightening new reality.

More and more younger people are joining the COVID-19 death toll, as the authorities reported the fatality of a 42-year-old woman who lost her battle with the virus. It was also reported that the woman was in good health before being admitted to intensive care on December 6.

But perhaps more worryingly, this latest fatality case isn't the youngest — nor was it the most tragic.

On December 3, a 38-year-old man became the city's youngest to die from COVID-19.

It was also reported that a confirmed case — which ended in a fatality — was unable to be admitted to hospital for treatment, due to the sky-high occupancy rates that are already putting pressure on hospitals across Hong Kong.

The fourth wave is here to stay, and it is the worst wave to date that our city has no choice but to weather.

At present, intensive care units across the city are at 80 percent occupancy rates and above; one hospital has even reported that its facilities are completely full and therefore unable to accommodate any new patients. Negative pressure rooms — a vital tool in combating viral diseases — are also having to cope with high occupancy rates.

Our economy isn't faring much better as restaurants and business owners are preparing their year-end accounts and staring at heavy business losses.

One survey has revealed that of the 2,000-plus Chinese restaurants established in the city, 15 percent have already shut down.

Unemployment has also continued to climb, and now stands at 6.3 percent.

With the year coming to an end, and the new year around the corner, it is time to reflect on the year that we have endured and try to strategize better for 2021.

Firstly, we need to rethink not only our preventative measures but the consistency and strictness of such measures. Time and again, the government is sticking to the same patterns and making the same mistakes. So far, we are stuck inside a blind alley — restrictions on social contacts imposed, cases fall, measures relaxed, cases rise again.

This cycle has been repeated not just in Hong Kong but in Britain and other Western countries, which recently included a regional lockdown in London and southeast counties after coming out of a national lockdown at the start of December.

But even when we are in a lockdown or containment mode, gaps in our city's measures have never been addressed and are certainly responsible for issues like imported cases.

During the earlier waves of infections, pilots and sailors were allowed to move around Hong Kong without the negative results of a COVID-19 test. This has since been addressed, as seaports and airports have employed designated transport and designated hotels for overseas arrivals going into quarantine.

The dance cluster is also the result of a government oversight, and an immense one at that. While it is clear that those in the cluster were irresponsible, the government must also be held accountable for its failure to implement the appropriate level of restrictions.

As a doctor, I am obliged to monitor the health and progress of my patients. If my patient is failing to progress in his recovery, then the responsible course of action is to change his treatment. If this doesn't work, then I am obliged to persevere until I find the correct regime of treatment that gives the patient a clean bill of health.

A saying comes to mind, "The definition of insanity is doing the same thing over and over and expecting a different result." This is how the government is currently operating, as their current way of "doing things" is failing to bring the pandemic under control, and this is why we currently are in the throes of a fourth wave with no guarantee that it is the last.

One may hope that this is merely the winter of our social and political discontent, but tougher times may lie ahead even in the spring and even with the advent of the vaccine.

The Hong Kong government has ordered 15 million doses for the residents in Hong Kong. Half of these will come from Sinovac and Pfizer-BioNTech, the latter of which has been approved for use in Britain, the United States, Japan, and the European Union.

However, we need to remain vigilant as the vaccine definitely is not a silver bullet, and not even the ultimate solution. And even if we could vaccinate five million people in Hong Kong to create herd immunity, it could take a year until early 2022 to achieve this.

I have espoused the benefits of universal testing for many months, and I will continue to endorse its benefits until Hong Kong implements it.

To the naysayers who say it can't be done, we certainly have access to enough resources to conduct universal testing. On the question of organization, former Chief Executive CY Leung cited the logistics of last year's district council elections as a comparison to carrying out universal testing.

During the elections, over three million people turned up at 610 polling stations over a 15-hour period. The voting process requires voters to queue to prove their identity before they are given the ballot paper, then they go into the booths to mark their ballot before going to the ballot box to cast their votes. The procedure of COVID-19 testing takes about the same time. It is all a question of educating the general public about the benefits and the necessity of universal testing.

Since Qingdao was able to mobilize its population of 10 million people over a 5-day period, Hong Kong can certainly do the same for a population of 7.5 million. If we need help from the Central government, the Hong Kong SAR government should just say it.

I also stand by continuous health education and promotion, as the public needs to be made aware of the benefits of universal testing, how the vaccine works, and other important facets of the pandemic and the virus itself.

It is through education that we can learn to come together to fight this invisible enemy and protect ourselves from the storm that is to come.

The author is president of Wisdom Hong Kong, a think tank.