BEIJING, Feb. 19 (Xinhua) -- The Communist Party of China (CPC) will launch a campaign on Party history learning and education, a timely and necessary move for this century-old party not only to review its glorious past but also to draw strength to advance the country's modernization drive despite challenges and risks. 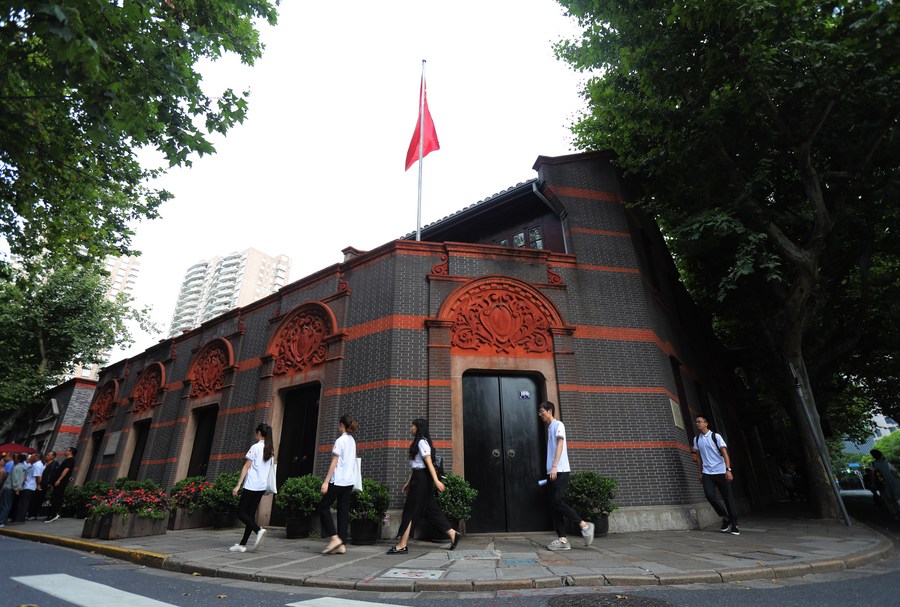 Volunteers from Shanghai University arrive at the site where the first Communist Party of China (CPC) National Congress was held in 1921, in Shanghai, east China, June 22, 2019. (File Photo: Xinhua)

Established in July 1921, the CPC has grown from a political party with only a few dozen members to a 91-million-member party that governs a country of 1.4 billion people. The Party has stood the test of time, reversing China's fate from the continuous decline since the Opium War in the 1840s to steady progress toward prosperity as the world's second largest economy.

The CPC reviews its history not to take comfort in its success, but to learn the laws of history, improve its capacity to lead and govern, and withstand various risks at home and abroad.

The education campaign comes in a year when the CPC is set to achieve its first centenary goal within the set time frame -- complete building a moderately prosperous society in all respects, and embarks on a journey toward the second, which is to fully build a modern socialist country.

The development goals are arduous. The Party should retain its advanced nature as a Marxist governing party, sticking to socialism with Chinese characteristics and always putting the people first. Meanwhile, the CPC needs to lead the people to effectively overcome obstacles in the way of development in the spirit of great struggles in the Party's history.

The Party leadership must be upheld, the people's interests protected, and blockades by vested interests broken through reform. The Party must do more to safeguard China's sovereignty, security and development interests, and oppose all attempts to split China or undermine its ethnic unity and social stability. The CPC must combat corruption and also rid itself of any "ailment" that erodes the Party's health.

An effective way to do so is to learn from the party's history as the process helps unify members' thought, and boost their morale to march in the same direction.

The education campaign will also have significance for the world. Since its establishment, the CPC has made contributing to human progress its mission. China will continue to hold high the banner of peace, development, cooperation, and mutual benefit. By reviewing its history, the CPC will reaffirm its resolve to preserve world peace and promote common development. The so-called "China threat" theory will only prove unfounded in the CPC's governance philosophy in the past, present and future.

History has proved that China's success hinges on the CPC. To continue with the success, the Party must keep improving itself. The upcoming campaign of party history learning and education, along with previous education campaigns such as "staying true to our founding mission," will become part of the prelude to China's journey of future success.