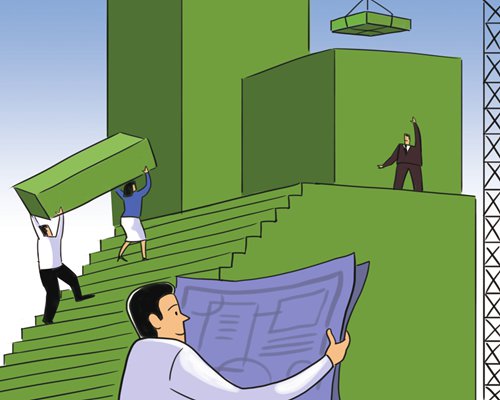 （Photo: Global Times)Editor's Note: The Two Sessions, the annual meetings of China's top legislative and advisory bodies, have been under global spotlight for the past few weeks. This year's Two Sessions are of extraordinary importance as they have adopted the constitutional amendments, restructured government institutions and elected the new national leadership. To understand what the institutional changes mean for China's future, as well as the policy agenda for the coming year, Global Times (GT) Washington-based correspondent Hu Zexi talked to Dr. Robert Lawrence Kuhn (Kuhn) who is a long-time China observer, and author and editor of over 25 books. Kuhn has been invited to Beijing to take a closer look at this year's Two Sessions.

GT: What kind of policy issues are you following during the Two Sessions?Kuhn: The proposed amendments to the Constitution of the People's Republic of China give a road map of areas deemed critical. Several of the provisions strengthen the stability, continuity and robustness of governance. Beyond these, I looked for any deviations from expectations, for example, on State-owned enterprise reform or local government financing. I also looked for any reaction to the increased push-back against China's rising global capabilities from certain countries.

GT: In recent years, the Chinese government has made more efforts to make Two Sessions' agenda better meet public expectations. For example, the government will cooperate with media websites to conduct surveys about top policy areas that the public wants the Two Sessions to address. How do you evaluate such efforts? Kuhn: Irrespective of the nature of the political system or ideology, transparency in governance is the best way for government to deliver effective, efficient programs, and enhance credibility. The Chinese government has been striving to increase transparency, which deserves praise. The Two Sessions are a vehicle for the government to communicate with the people and engage them through media in dealing with all the critical issues.

GT: How do you see the political belief of China that democracy should meet the real or fundamental needs of the public?Kuhn: Government performance and democracy are not the same. The former is indeed assessed by alleviating poverty, reducing pollution, improving healthcare and the like. Democracy is the public participation of common people in the complex process of governance. Thus, true democracy is much broader than one-person-one-vote. It includes, primarily, the capacity to provide substantive input on complex issues and to provide oversight in the management of officials.

GT: China for long has argued that democracy or any other political mechanism should be developed on the basis of a country's specific condition. How do you see this belief, as well as its practice? Kuhn: Certainly, political systems differ, even between countries that have the same ideology. Nonetheless, there are great commonalities in the goals and objectives shared by all countries and people. I suspect that over time, measured in not less than decades and perhaps even centuries, there will be a convergence of systems toward what I call with a smile, "Optimizationism" - leaders, officials, executives making myriad decisions every day to optimize outcomes without thinking of the ideology.

GT: There's talk about China's unique system of multiparty cooperation and political consultation led by the Communist Party of China (CPC) during the Two Sessions. How do you observe this system?Kuhn: The benefits of a one-party-rule are apparent: the coherence of policies, rapid decision-making and formulation of strategies that require long-term consistency for long-term commitment. But all systems of governance have trade-offs, and two challenges of one-party-rule are assuring that all rational points of view, including dissenting ones, are included in the decision-making process; and systemic checks and balances for oversight of officials at all levels of government.China's system of multi-party cooperation and consultation, led by the CPC, is a political innovation in including inputs and ideas from diverse segments of society, while still maintaining harmony of spirit and consistency in policies. But because of its scale and power, the CPC, which is the ruling party, has a higher obligation to pay attention to other parties and voices. A true democracy is measured by how the majority treats the minority.

GT: As a decades-long observer of China, what do you think the constitutional amendment will bring to the country? Kuhn: This constitutional amendment is all about strengthening China's system of governance, especially the Party's leadership of the country and President Xi Jinping's leadership of the Party and the nation. Going by the whiplash of Western reactions, one could be forgiven for assuming that the amendment is all about abolishing term limits of the president and vice president. In fact, there are 21 clauses in the constitutional amendment and to understand where China is going, one must gauge the meaning and intent of all of them. Xi has been consistent in respecting, indeed in championing, China's Constitution, and by now amending it, he underscores the congruity between the realities of how China is governed and what the Constitution says - thus bolstering Xi's commitment to the Rule of Law. Establishing the National Supervisory Law and Commissions, expanding the anti-corruption campaign to all public organs and organizations, reaffirms Xi's commitment to enhancing the rule of law.As for term limits, it is not that Xi will hold the formal titles of leadership for life, but that he will hold real leadership long enough to bring about China's national rejuvenation and establish Chinese type democratic norms. All factors considered, because of China's special conditions and Xi's special capabilities, abolishing term limits may be good for China. It is commonly said that China's system of governance can ensure stability and consistency, which is a necessary requirement for advancing reform.

GT: What do you see as the underlying reason for the institutional restructuring of the government passed during the Two Sessions?Kuhn: The sweeping restructuring of the Chinese government streamlines the bureaucracy, eliminates institutional conflicts of interest between government bodies, aligns authority with responsibility, and, significantly, enhances the leadership of the Party in the management as well as the oversight of the government. Although the restructuring has multiple motivations, a prime driver is to support China's continuing development under complex conditions - a slowing economy, uncertain financial risk, unacceptable pollution, the special demands of innovation. Given China's challenges at home and abroad the government restructure is timely. Some media outlets describe it as a "reshuffle," as if the random rearrangement of a deck of cards. I beg to differ. This restructuring is as deliberate as it is far-reaching - and planned precisely to address a host of contradictions. The outcome is to strengthen CPC's leadership throughout the country. In fact, deepening reform is now defined, for state as well as for Party institutions, as strengthening the CPC's leadership in every sector. The aim is consistency and uniformity in implementing policy. The announcement of the restructuring followed swiftly after the adoption by the National People's Congress of the constitutional amendment, and although both were long in the works, their rapid-fire sequence serves to underscore the preeminence of President Xi in setting the new agenda, and the power of the Party in implementing the new policies.

GT: Environment has always been a heated topic at the Two Sessions. How do you see the prospect of green development in China?Kuhn: I have been following China's environmental problems for over two decades, and until recent years under President Xi. While officials would of course decry pollution, it only became progressively worse. Companies flouted the law. The minuscule fines were a small price for not worrying about the cost of controlling pollution. Officials were loath to risk impeding economic growth. Today is dramatically different. President Xi has raised ecology and environment to the highest category of national priorities. Ecological progress is among the five top goals (along with economic, political, cultural and social progress). Green is the third of the New (Five Major) Concepts of Development. The change in attitudes toward pollution is stunning. For example, fines for corporate pollution now hurt.