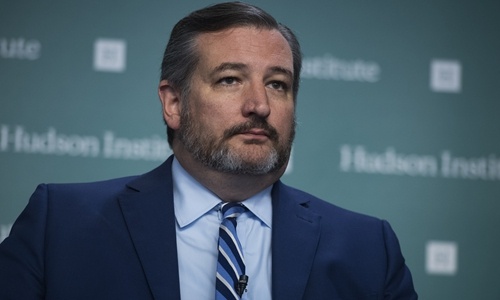 US Senator for Texas Ted Cruz said publicly in an interview on Sunday that "it now appears the overwhelming weight of the evidence suggests" that the novel coronavirus originated "in a Chinese government lab."

Cruz's allegations are similar to wild claims made by other US politicians. These are all completely groundless. Texas is now the second state in the US in terms of confirmed COVID-19 cases. But obviously Cruz has not focused on effectively responding to the epidemic. Instead, he politicized the origins tracing of the novel coronavirus.

The US faces a huge problem in dealing with the epidemic. Cruz is trying to shift the focus and use the origins tracing of the novel coronavirus to blame China. At the same time, he is blaming China to try to justify the US' position to hold China accountable.

In addition, Biden asked the intelligence community to speed up the tracing process, requesting a report by the end of August. To some extent, the US has made a conclusion before even looking for evidence. The presumption of China's guilt serves nothing but political purposes.

Recently, the epidemic in the US was again on the rise. However, as early as March, Texas announced the cancellation of the statewide mandatory mask measures. Cruz even refused to wear a mask at the press conference and said to the reporter who asked him to wear a mask, "you can stay away from me."

With this attitude, Cruz is not qualified to make China a scapegoat. Cruz has no basic respect for science. For a respiratory infectious disease, which is so contagious, wearing a mask is the most basic element of common sense. But Cruz has politicized it, hyping up measures such as lockdowns and social-distancing as authoritarian ploys that undermine individual freedom, and even challenge the American political system. Politicizing scientific issues is a common feature of Cruz-like politicians.

Cruz also introduced the so-called "Ending Chinese Medical Censorship and Cover Ups Act of 2020" last year, claiming that China's "censorship and suppression" during the COVID-19 are "a threat to human rights." This is completely nonsense. Cruz and some other US politicians' passive COVID-19 fight and the politicization of the epidemic are much bigger threats to human rights.

If Cruz criticizes China's "censorship," why did China control the epidemic so well when so many other countries are still in such a mess? The US is now the hardest-hit country with the highest number of COVID-19 deaths. Does that make the US the worst violator of human rights? Cruz's logic is completely self-contradictory. It is nothing but a presumption of guilt. This is the basic tactic of a bunch of ignorant anti-China politicians.

No US official has been directly held accountable because of the COVID-19 epidemic. The number of COVID-19 confirmed cases in Texas, where Cruz is located, currently ranks No.2 in the US. For Cruz and many other American politicians, their personal political interests are the most important thing now, such as whether they can be reelected or promoted to a higher position in the future. Cruz ran for US president during the 2016 presidential campaign. He wants American people to believe his words no matter what the facts are, as long as it does not affect his political future.

In order to convince the American people of his lies and evade responsibility, the first thing Cruz has done is pass the buck to the Democrats and to China. Moreover, US politicians like Cruz do not seek solutions to solve problems. As long as they could shift the blame on others, they care little about whether the problems could be addressed.

Republicans have more supporters in Texas. The overall public opinion in the state supports or encourages an anti-China and anti-communist atmosphere. No matter whether it's reasonable or not, and no matter how many people have been infected, the key for Cruz is to foster this atmosphere to win votes.

Cruz's goal is definitely to be reelected as senator. He may run for presidency to advance his political career. An anti-China stance on the virus origins tracing issue could win him more eyeballs. This might make more Americans believe he is a defender of US interests and ideology. However, what he has done is purely for his ambition. This is his fundamental purpose.