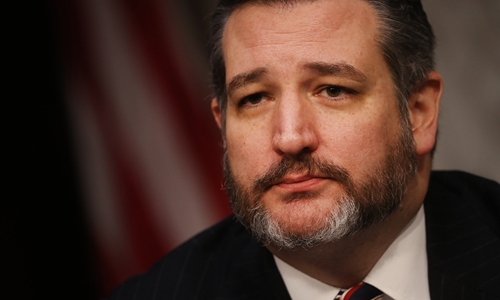 In his column in The Dallas Morning News, Cruz described Hong Kong as "the new Berlin," aiming to distort a Chinese internal affair into the so-called struggle between the West and East.

However, although such a pattern bore fruit during the Cold War, it has made the US ignore what it really should do, and thus restricted the country's leadership amid the changing global order.

Why has Cruz been upholding the banner against China? Cruz told media in September he hopes to run again for president.

Given this, the answer to the question above is quite clear: He used his Cuban background to set an anti-communist and anti-China image to pave the way for his political career.

Cruz ended his presidential campaign in May 2016. But he didn't abandon the desire to take the wheel of the world's most powerful country. "It's the most fun I've ever had in my life," Cruz recalled in his campaign.

Since Senator Marco Rubio, who resembles Cruz's background, has gained immense spotlight for his criticism of China, Cruz doesn't want to be left behind.

Hence, Cruz has made himself heard louder with his tough attitude toward China. Ironically, Cruz was once regarded by his rival in a senate race of putting the interests of China above the US'.

There have always been voices against China in the US, but they didn't become political mainstream.

In recent years, China-US relations have deteriorated, which gave people like Cruz the opportunity to take the stage. As long as one goes against China, he or she could draw public attention and gain politically.

Such being the case, it is understandable for Cruz to peddle the story of his father, who was born and raised in Cuba, to evoke and repeatedly enhance Americans' fear of communism and China.

Therefore, he exerts all his energies on attacking China in a Cold War tone, which reminds people of an obsolete ideological struggle.

However, born in Canada, Cruz knows hardly anything about Cuba except his father's story, not to mention knowing nothing about what China is really like. But he won't even try to know China because labeling himself as anti-China and strengthening his hawkish stance is enough for him to advance as a US politician.