Chinese Ambassador to the U.S. Cui Tiankai on Tuesday expressed hope that the new U.S. administration would show patience, rationality and sincerity in handling Sino-U.S. relations. 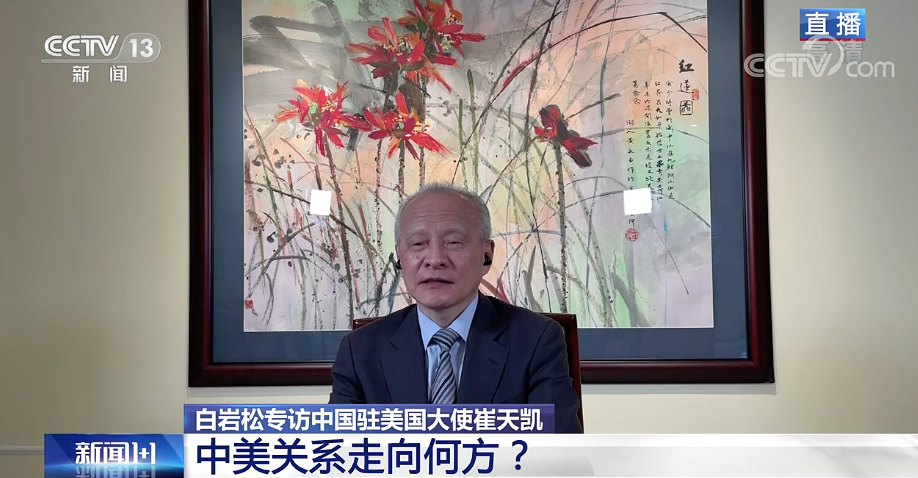 Cui Tiankai in the interview (Photo from CCTV)

He made the remarks during a China Media Group interview about White House spokesperson Jen Psaki's remarks on U.S. relations with China.

China hopes the U.S. can review and rethink its China policy in recent years and find a positive and realistic way to handle Sino-U.S. relations, Cui said.

The ambassador also called on the U.S. to understand China and the bilateral ties objectively, with "patience", adding that he thought the most urgent thing Biden should do is to help the U.S. restore its confidence, optimism and diligence, "like what a superpower should be."

Talking about China-U.S. ties, Cui noted the fundamental question for the U.S. to answer is if the country would accept China's growth. Stressing China is a very different country from the U.S. in terms of culture, history and social system, the Chinese ambassador questioned if the U.S. would respect Chinese people's right to pursue a better life.

"As long as the U.S. can find an answer to the aforementioned question, they could find solutions to any other problem concerning China-U.S. relations no matter who becomes the U.S. president," Cui said.
When asked if bilateral ties were at the lowest ebb or likely to go lower still, Cui said it depends entirely on what kind of policy choices both sides make.
If one side is determined to make the wrong choice towards confrontation, the situation will be worse than it is, Cui said. "But we should work towards the good direction," he added.
"This depends on whether the two sides can move in the same direction, whether they can reach a certain consensus on the strategic framework of China-U.S. relations, and what kind of policies the new U.S. administration actually introduces," he said.
Cui also pointed out that from a long-term historical perspective, the only correct choice between China and the U.S. is "cooperation".

The ambassador reiterated that, as two major economies, China and the U.S. shoulder the responsibility of global economic development and cooperation is the way forward.

"Despite the tariff war and trade war imposed on us by the United States, and despite the impact of the epidemic, our reform and opening-up has never stopped, and our business environment is constantly improving, which is also a public opinion in the U.S. business community."

As to the reopening of the consulates, Cui said the two sides had not started to discuss the issue but it is better for the doer to undo what it has done.

China didn't start the closure, "so it should not be up to China to start the reopening," he added.