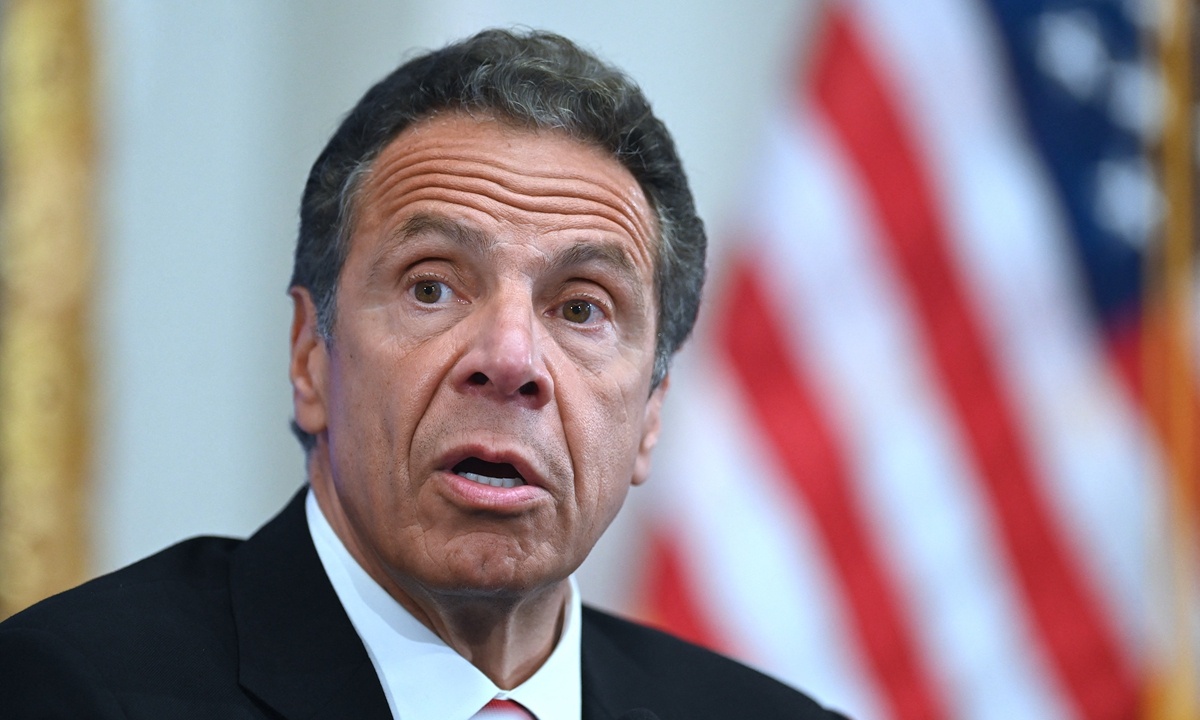 Andrew Cuomo, who was until recently the New York governor, a COVID-19 hero, a dazzling Democratic superstar who achieved notable merits for his party in countering Donald Trump, finally fell from grace for the political infighting within the Democratic Party over allegations of sexual harassment. For Chinese people, the long-lasting episode is more mysterious and thrilling than House of Cards.

Cuomo announced his resignation from office on Tuesday, a week after the report of a five-month long investigation concluded that he had sexually harassed 11 women and after his repeated denials. Along with the surfacing of his sexual harassment scandal earlier this year, others started to dig up and hype up his other misconducts, including concealing the actual number of nursing home deaths.

Workplace sexual harassment surely deserves punishment. Yet Chinese netizens are puzzled: Why has no US governor resigned for losing the astonishing number of lives due to their incompetence to rein in the virus? But a governor's personal scandal is taken out with a big fuss?

At the beginning of the US epidemic, the Democrats needed to be united to beat Trump. Cuomo, a popular figure among US public for doing a good job to fight COVID-19, is chosen to play a core role in it. He was portrayed and hailed as a superstar, lauded for delivering messages to the New York state's public at press conference every day. He was so popular that some considered him to be a potential candidate for the next Democratic presidential nomination.

But for now, Cuomo's mission has been accomplished. The Democratic Party no longer needs him to assail Trump. Ergo say some, his political power needs to chill.

However, if Cuomo influences the Democratic Party's ruling force, or to any extent challenges Biden teams' authority, he will inevitably face consequences, Xu Liang, an associate professor at the School of International Relations at Beijing International Studies University, told the Global Times.

After the scandal emerged, he was soon pinned by labels such as "concupiscent" and "tyrant," as if what he has done before suddenly does not matter. A growing number of Democratic heavy weights, including House Speaker Nancy Pelosi, called for the Cuomo's resignation. So did Biden, who once called Cuomo the "gold standard" of COVID-19 management. Cuomo's scandal is their weapon. If there is no scandal, they may find other "weapons" to take him down.

Former US president Bill Clinton once faced similar yet far-worse scandal, but he continued his presidency. That's because the Democratic Party needed Clinton to safeguard their ruling status, "so the whole party, from top to bottom, was protecting him," Xu said. Obviously, Cuomo did not matter as much as Clinton. On the contrary, his influence posed a challenge to the current ruling elements of the Democratic Party. Hence, "his stepping down is purely a result of internal Democratic strife," Xu noted.

As it turns out, the so-called democracy in the country is a pseudo-proposition. The fate of politicians, be they heavyweights or new stars, is tightly grasped by the interests of their parties.

One can be a "hero" when needed, then a "criminal" the next minute when he is of no use. It's a pity that no US politician seems to care more about the battle against the public health crisis than a sex scandal. This is how US-style democracy works.