OPINIONS Currency war may test US in unforeseen ways

Currency war may test US in unforeseen ways 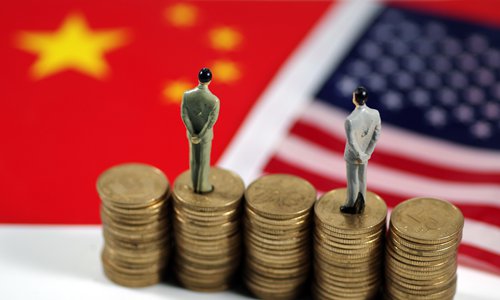 Beijing will be fully prepared if US President Donald Trump seeks a currency war with China.Trump tweeted Tuesday that "it would be game over, we win" if the US Federal Reserve ever did a "match," speculating China would pump money into the economy and reduce interest rates. Some observers believe Trump wants to start a currency war to win his trade war with China, citing the tweet as the latest evidence.As Trump continues to wage his trade war, he has repeatedly criticized the Fed's interest rate increases, which pushed up the exchange rate of the US dollar and thus neutralized the impact of his tariffs. It is possible that the Fed won't be able to withstand pressure from the White House and merely fine-tune its established policies to pump up the economy. The US may ease monetary policy and announce an interest rate cut sooner than expected.It is very unlikely for Trump to turn a blind eye to a weaker yuan. He may mobilize all available resources, whether economic or political, to fully adjust the US economy and attack China's financial system if needed. A possible interest rate cut is not the only tool at US policymakers' disposal. The global financial system is to some extent dictated by the US dollar. Washington may stir up more market volatility to put pressure on China.After a year-long trade war, Chinese economists are familiar with the style of Trump and the rules organizing the Western economy. But the US does not understand China. The Chinese economy's relatively good performance amid the 2008 global financial crisis suggests it won't collapse even in the worst-case scenario of a currency war with the US.Chinese economists who study Western economics can infer the track the US may follow in a currency war, but people in the US may have no idea what China will do. With speculation that Trump may seek a currency war with China, talk that China might dump US treasury bonds to retaliate circulated in recent days. However, we believe China will spare no effort to avoid this "nuclear option." China will stay calm even if the US starts a currency war.But this does not mean China won't take countermeasures. The country has already begun taking action to enhance its financial stability. Efforts to foster greater financial endurance will continue in China, enabling the country to adopt a more flexible policy to strike back if Trump seeks a currency war with China.