Current performance of the US inevitable result of deepening political decay 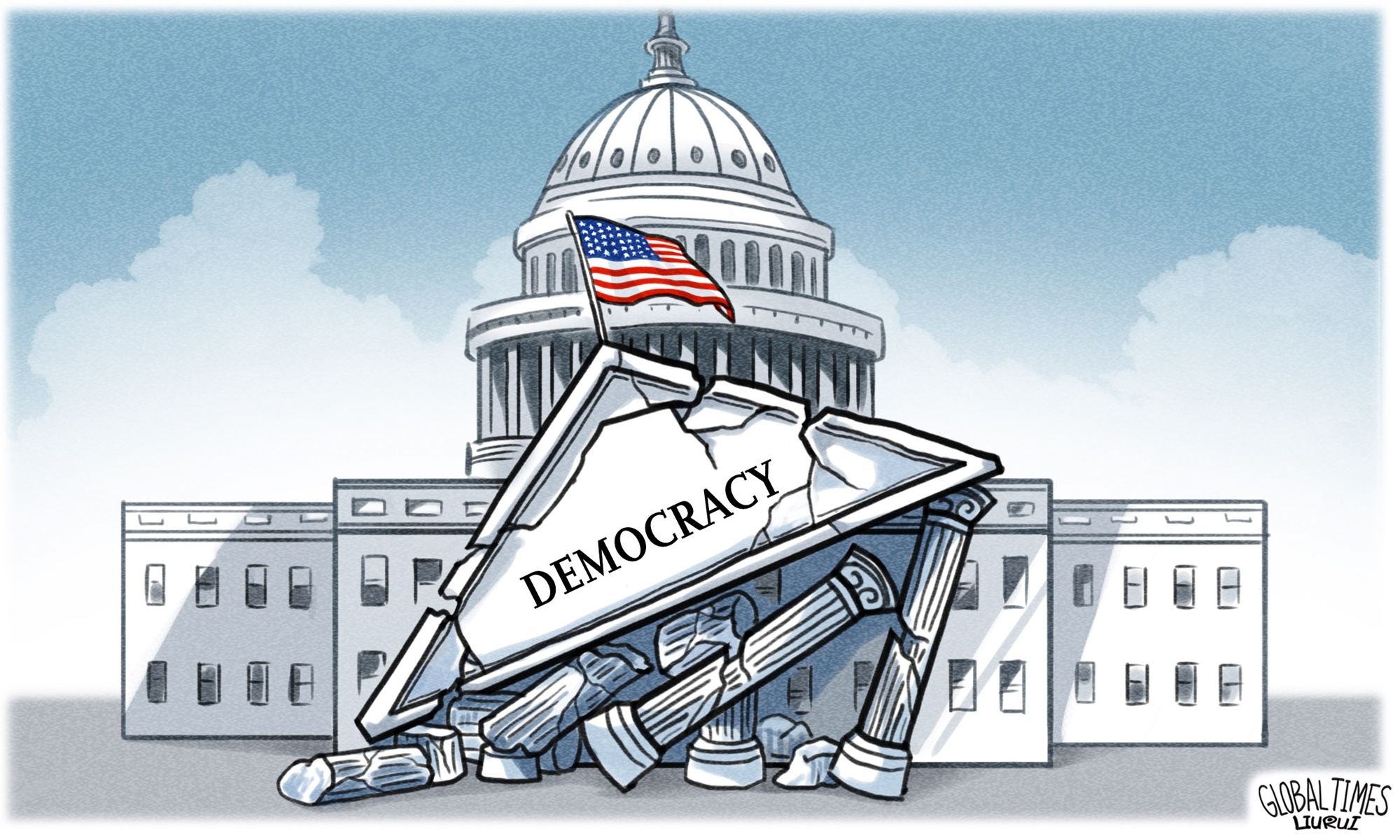 Western democracy once boasted that it stood on the right side of history and was advanced enough to "end" history.

But since the start of the COVID-19 fight, people have had increasingly profound reflections on the effectiveness of Western democratic governance.

Meanwhile, Donald Trump's supporters stormed the US Capitol on January 6 and many social medial platforms banned Trump as well as his supporters' accounts. The dramatic developments of the domestic political situation in the US - the only superpower after the Cold War - have also made people rethink the political system of Western countries which tend to be mature, stable and rational in theory.

Except for those who wish to whitewash Western democracy to support their own personal political beliefs, most observers with objective and rational perspectives might think of US political scientist Francis Fukuyama's book in 2014: Political Order and Political Decay: From the Industrial Revolution to the Globalization of Democracy.

Fukuyama is known for his "end of history" theory. As one of the main advocates of neoliberalism, he said in an interview with French media Le Point in April 2020 that we have seen the tail of the comet of neoliberalism.

Political decay is a political theory originally raised by Samuel P. Huntington, who also proposed the thesis of "The Clash of Civilizations." Political decay refers to a kind of political turmoil that develops during a country's political modernization. This is due to people's enthusiasm for participating in politics exceeding the degree of political institutionalization.

Abiding by this analytical framework, combined with US practices and Professor Fukuyama's viewpoints, the current performance of the US can be seen as the inevitable result of its deepening political decay.

Such political decay in developed countries is not related to the operation of specific institutions and political mechanisms in the US at the micro level. It has a profound root; that is the radicalization of elite democracy and the decline of its endogenous self-adjustment ability.

Take the US Professor Fukuyama wrote an article entitled "American Political Decay or Renewal?" in June in 2016, arguing "social class is now back at the heart of American politics." He analyzed why Trump's campaign slogan attracted the working-class especially white men with a high school education or less and believe "American democracy is finally responding to the economic stagnation of most of the population."

But after Trump won the election in 2016, this interpretative framework was completely abandoned by supporters of the elite establishment faction. They firmly believed that Russian interference, rather than the choices of the US people, had contributed to Trump's election.

When the 2021 chaos broke out on Capitol Hill, the establishment faction was equally adamant that it was the result of Trump's personal incitement. Similarly, the Biden administration insisted that the reasons were white supremacy and Trump's incitement, rather than a need of profound structural reform within US political and economic systems.

The decline and decay of Western democratic mechanisms in US practice is more reflected in the COVID-19 epidemic which is still ravaging across the country. Effective governance over the epidemic has been absent in the US.

As of press time, more than 463,000 Americans have died due to the virus, a number greater than US military casualties in World War II (407,316). But the US government's solution was to pump money into the economy to "help the nation survive financially." As a result, the total net worth of the US' 651 billionaires rose from $2.95 trillion on March 18, 2020 - the rough start of the pandemic shutdowns - to $4.01 trillion on December 7, 2020, a leap of 36 percent, Americans for Tax Fairness and the Institute for Policy Studies reported on December 8, 2020.

Even if the US democratic practice follows the development of Western politics, it has long deviated from philosopher Aristotle's description of politics as the source of Western politics: that is, to make people live a good life.

The decay of the US democratic system, which is reflected in a dramatic way in 2021 - the year that marks the 30th anniversary of the end of the Cold War - is evidence that nothing can last forever.

The author is professor at the School of International Relations and Public Affairs of Fudan University in Shanghai.