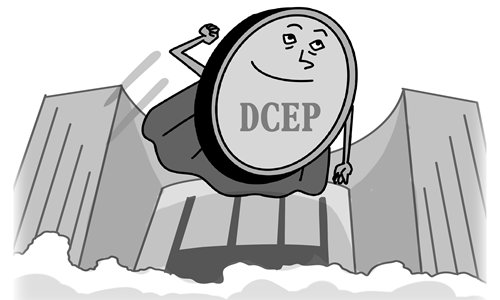 The digital currency electronic payment (DCEP) plan, which the People's Bank of China (PBC) is expected to roll out soon, will showcase to the rest of the world what a genuine digital currency looks like. Before sovereign states vanish and the world becomes borderless, currency needs to be issued by a nation's monetary authority. Most so-called digital currencies, including Libra, are merely digital assets or products with a securities nature, but not currencies.

Additionally, DCEP is backed by a nation's force and legislation system while Libra contains high risk. Whether it is Bitcoin, Ethereum or Libra, most digital currencies do not have strong national support to allow them to circulate freely within a country or larger area. They are likely being put on probation in the face of a sovereign state, or subject to questioning. Limited laws and regulations are offered to protect digital currencies or their users. Once a problem breaks out, it could be disastrous - digital currencies could be banned or expelled from a country.

These so-called currencies, despite how fashionable they may sound, lack underlying assets upon which to build. Libra's plan to peg itself with a basket of currencies has yet to receive consent from the US Congress and central banks worldwide. Therefore, it may not go ahead as planned regardless of its attempts to gain approval in the US.

Libra has excluded the Chinese yuan from its basket of currencies. Due to China's position as a major country in the digital currency field and its development of blockchain technology, leaving China out of the basket will not work out in favor of Libra.

In contrast, DCEP is based on the yuan, which is on its way to becoming more international. Though DCEP is not pegged with a basket of currencies or an anchor, having the same function as the yuan makes it more credible. The yuan is now involved in currency swap agreements with several other countries. China also has been adding the yuan-dominated gold futures to the Shanghai Gold Exchange, forging stronger ties between the yuan and gold.

The digital currency which will be issued by China's central bank has strong technological support. The technology has been tested multiple times and is based on the successes of regional pilot experiments.

DCEP is the third generation of cryptocurrency. It has a dual blockchain application which is supported by the central bank. The top layer of the blockchain has adopted decentralized technology, and the bottom layer centers on sovereignty, nation and currency authority.

The US-dollar-centered international financial system will be put to the test. If it does not respond promptly, the US' advantageous position will wane and fall behind the current economic model and technological financial infrastructure, which are now in constant development. Central banks worldwide, including the PBC, the Bank of England and the Central Bank of the Russian Federation, are continuing research on sovereign digital currencies and engaging in closer cooperation.

A completely new network of currency issuance and international exchange settlements will likely take shape. The US dollar will be compelled to follow and join the trend.

China's research and development on digital currencies traces back more than five years. The technology is tested and reliable. The PBC has launched pilot projects in various areas and companies with success. The time is ripe to issue DCEP. The cryptography law and a series of regulation measures have also been passed to safeguard the advent of DCEP.

Once DCEP emerges, the supervision of other digital currencies and financial institutions will be more convenient with a technical interface management. The PBC's digital currency creates an entirely new financial infrastructure. The technical interface management can determine whether or not certain licensed financial institutions can connect to the financial infrastructure. Inappropriate behaviors such as speculation can therefore be monitored and regulated before they cause any trouble.