A friend of mine, a diplomat returning home after less than three years’ service in India, was asked at his exit medical examination how many packs a day he smoked. 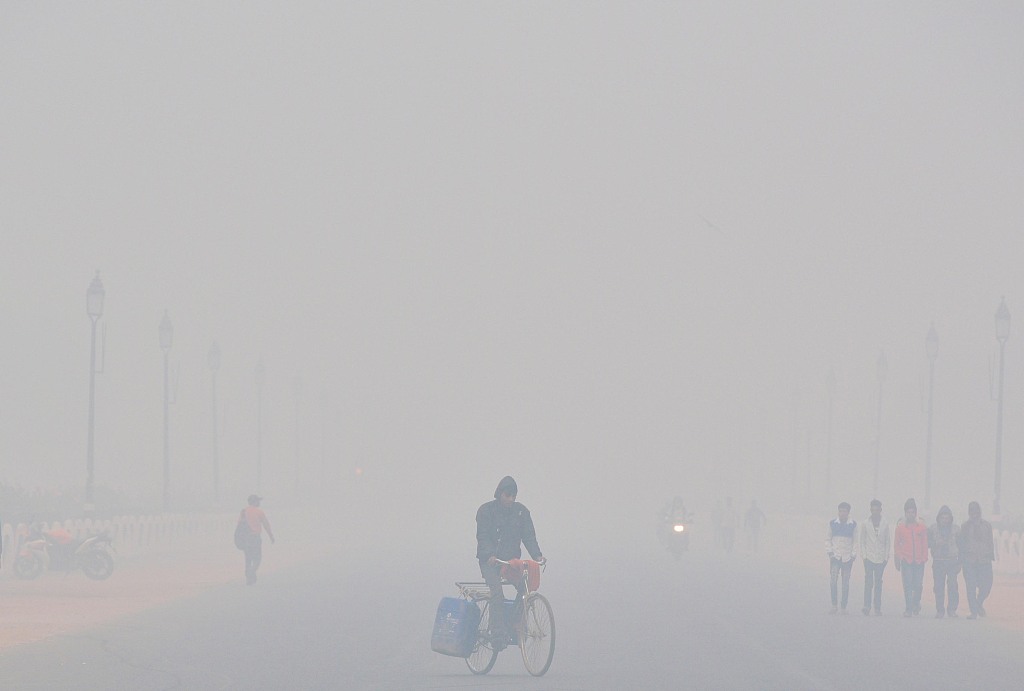 People walk on a road engulfed with thick haze, near India Gate, on November 7, 2018 in New Delhi, India. (Photos: VCG)

When he protested that he was a staunch non-smoker, the doctor commented that X-rays of his lungs showed otherwise. But my friend had never lit up. All he had done was breathe Delhi’s air, three smoggy winters in a row.

It really is that bad. When November comes, India — and particularly its capital city — begins to choke on a thick blanket of smog that chokes lungs, corrodes throats, and impairs visibility.

There are also industrial factories spewing smoke, charcoal braziers on the sidewalks keeping pavement dwellers warm, coal stoves used by roadside chaiwallahs (tea-sellers), and even the agricultural stubble burned by farmers in the nearby states of Punjab and Haryana.

All of these air pollutants sweep into the capital city, with vehicular emissions adding to the dust that Mother Nature has already bestowed on Delhi in abundance.

Delhi had just three “clean air days” in the whole of 2017. But the worst air quality is in winter, when polluted air meets winter fog and is trapped, giving Delhi a grayish opacity that reduces visibility, delays flights, and reduces the city’s traffic to an even more polluting crawl.

The consequences are alarming. The number of premature deaths due to air pollution is rising.

Poor air quality is now costing India at least 1 percent of GDP every year in respiratory diseases, reduced productivity, and increased hospitalization, and may be reducing Indians’ lifespans by three years.

According to the “State of Global Air” report published by the Health Effects Institute, the absolute number of ozone-related deaths in India rose by a staggering 150 percent from 1990 to 2015. The economic implications of deteriorating air quality are equally ominous as well.

A 2013 World Bank study estimated that welfare costs and lost labor income due to air pollution amounted to nearly 8.5 percent of India’s GDP.

Labor losses (in terms of number of man days, for example) due to air pollution totaled more than US$55 billion in 2013, and premature deaths are estimated to have cost the country an estimated US$505 billion, or roughly 7.6 percent of GDP. In 2015, the New York Times’ former South Asia correspondent, Gardiner Harris, explained that he was leaving his post prematurely because merely living in Delhi was damaging his children’s health.

Describing the asthmatic travails of his eight-year-old son, Harris wrote that Delhi is “suffering from a dire pediatric respiratory crisis,” in which “nearly half of the city’s 4.4 million schoolchildren have irreversible lung damage from the poisonous air.”

He and other expatriates were “pursuing our careers at our children’s expense,” and he concluded that it was “unethical for those who have a choice to willingly raise children here.” So he picked up his kids and left. Most Indians don’t have that choice. They must live with what the media often refer to as Delhi’s “killer dust” — respirable suspended particulate matter that becomes lodged in the lungs and impairs our breathing.

A study of Delhi schoolchildren between four and 17 years of age, conducted by the Kolkata-based Chittaranjan National Cancer Institute, found that key indicators of respiratory health and lung function were 2-4 times worse than in schoolchildren elsewhere. And the damage was irreversible.

And it needs to act fast. According to the World Health Organization, 13 of the world’s 20 most polluted cities and towns are in India.

More than a million Indians are dying every year because of bad air.

Public discussion of India’s deteriorating air quality and its effects on human health — and thus awareness of the problem — is startlingly limited. India’s politicians need to design an action plan that generates a groundswell of public pressure on the government to confront the issue head-on.

The satirical songwriter Tom Lehrer famously warned listeners that if they visit an American city: “Just two things of which you must beware/ Don’t drink the water and don’t breathe the air.” Updated for India, it is a perfect song for a crisis that has become an existential threat.

The author, Shashi Tharoor is a former UN under-secretary-general and former Indian Minister for External Affairs and Minister of Human Resource Development, is currently Chairman of the Parliamentary Standing Committee on External Affairs and an MP for the Indian National Congress. Copyright: Project Syndicate, 2018. www.project-syndicate.org