Famed physicist Albert Einstein was thrust into media limelight when a series of travel diaries written in early 1920s were found to contain deeply racist and xenophobic views. In his diary, Einstein described the Chinese as "industrious, filthy, obtuse people… they are a peculiar herd-like nation, often more like automatons than people." The shocking revelation has somewhat tainted the image of this iconic figure. 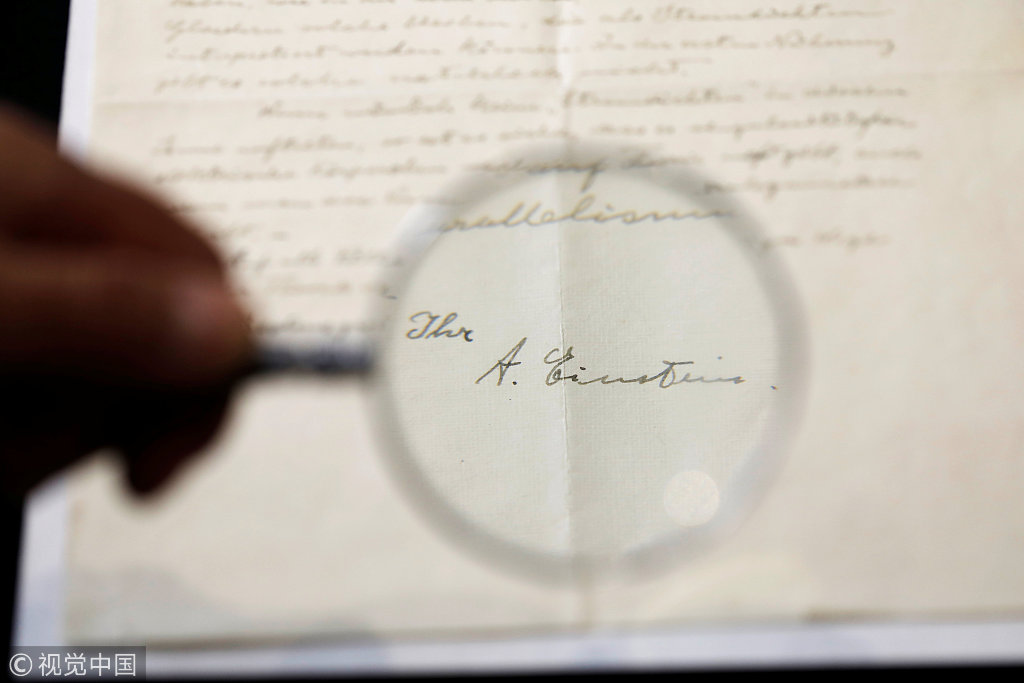 A letter written by Albert Einstein in 1928, in which according to the auction house he outlined ideas for his "Third Stage of the Theory of Relativity", is seen before it is sold at an auction in Jerusalem, March 6, 2018. (Photo: VCG)

Being Jewish, Einstein later devoted himself to the civil rights movement in the US and lent sympathy to the treatment of the black population. Though the diaries were written nearly 100 years ago before the concept of anti-racism was fully developed, the great physicist's inner world has shattered the expectations of many.

A heated debate has flared up among Chinese internet users as to whether Einstein was a racist and if it is fair to judge his views by today's human rights standards. When Einstein visited China, Japan and some other Asian nations in 1922, the gap between Western and Eastern civilizations was huge. China had barely recovered from the humiliation of World War I and was mired in battles among warlords. Feudal rule had been overthrown, but a republican system functioned poorly.

That was the background of Einstein's diary. Famous Chinese writer Lu Xun (1881-1936) had many of his novels written during the same period. He made his name by depicting the dark side of Chinese society of the time and yearning to bring the Chinese out of their stupor.

This is not to say that Einstein should be forgiven for his racist view. Struggle for racial equality has however been a long and hard fight. The scientist likely expressed the same views in daily conversation.

Had the political correctness against racism developed at the time, one couldn't dodge censure for such offensive remarks against an entire race. It is also doubtful that he wanted to record his thoughts in private diaries. But the reality is Einstein lived in a world with a lax attitude toward racism.

After all, xenophobic sentiment against immigrants from Asia was common in US politics during the late 19th and early 20th centuries. Persecution of Jews reached unprecedented levels during World War II.

It is the public's intolerance of racism today that made Einstein's diaries a center of the storm a century later. There is a development gap among countries, but it is political suicide for any public figure to make offensive remarks against race openly or privately. Political correctness is perhaps top consideration for public figure when making comment.

Einstein's diary kindled the fiery debate probably also because of the lingering question - is racism prevalent subtly today? Some Western media outlets inaccurately reported that Chinese net users defended Einstein's racist remarks. It would have made more sense if these media outlets explored whether racism against Asian exists today.

Racism against Asians is seen from time to time. In many cases, it is forgotten with an apology. It could be an image printed on a T-shirt, or a supermodel making a slit-eye gesture, or a TV anchor making disheartening comments.

Despite excellent academic performance, Asian students face a discriminatory admissions policy in Harvard. Asians are striving for due respect and fair treatment even today. They have made huge strides from the time of their ancestors, but it seems there is a long way to go.

Racist sentiments still persist. It is better to examine ourselves than judging whether Einstein was racist. Will people 100 years later be shocked by incidents of racism today? It's hard to say, but this question will haunt us for a long time.

The author is a commentator of the Global Times.