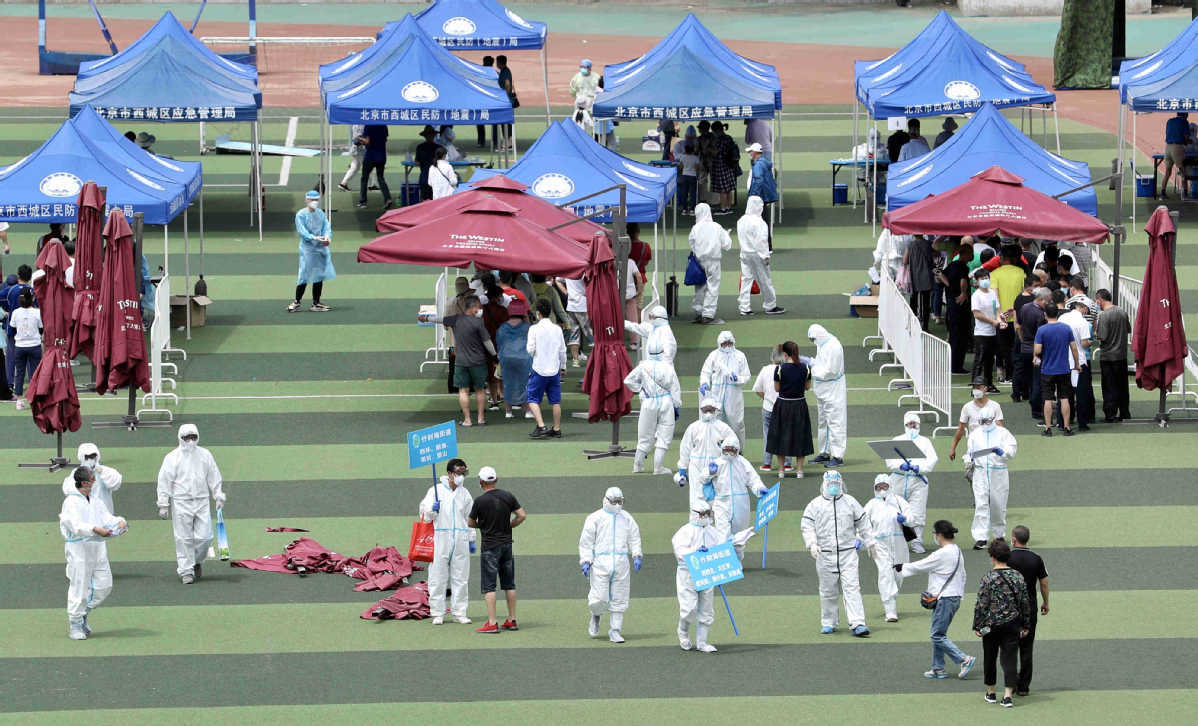 That Beijing has reported 106 confirmed domestically transmitted COVID-19 cases from June 11 to 15 should be a warning to all residents of the capital, in fact, all the people in the country, that the threat of the novel coronavirus is not over even though most of the cases in Beijing have been traced to the now-closed Xinfadi wholesale market for fruits, vegetables and meat products in the capital's southern district of Fengtai.

Yet Beijing conducting extensive COVID-19 screening, with its daily testing capacity exceeding 90,000 samples should reassure residents that the city authorities are committed to stemming the new outbreak over the past few days.

To be sure, at a time when Beijing residents were beginning to believe that life was slowly, but certainly, returning to normal, the new infections have instilled a sense of heightened attentive vigilance against the virus among them, as can be seen in the reduced numbers of people and vehicles on Beijing's streets. To meet the new cluster of infections, however, the Beijing authorities have increased the number of nucleic acid testing centers to 98.

One can only hope the new measures and preparations to stem the spread of the virus will be effective. Responding promptly to the new infections, the city authorities not only closed the Xinfadi market and locked down the adjacent neighborhoods but also tried to identify the 200,000 who have been to the market, in order to find out the potential virus carriers.

As of 6 am on Monday, the city authorities had set up 193 sampling collection sites across Beijing to facilitate nucleic acid testings. The authorities have also instructed medical institutions across the city, especially 76 with “fever clinics”, to conduct nucleic acid and antibody tests on all patients who complain of fever to strengthen epidemiological investigation.

Apart from the testing, the city authorities have further tightened prevention and control measures on more communities. Moreover, about 100,000 workers in 7,120 residential communities and villages have joined the battle against the virus.

Joining the battle against the outbreak, Beijing's education authorities on Monday instructed schools to re-implement closed-off management on campus, and allow students to opt for stay-at-home studies. And the Beijing municipal education commission instructed all schools to strictly follow the new, tough prevention and control measures, and teachers, students and non-teaching school staff to wear face masks on campus.

Thanks to the threat of the virus easing in the days preceding the new cluster infections, six grades in primary and middle schools across the city had resumed classes, with about 840,000 students in more than 1,400 schools attending classes. But now the students can opt to study at home.

Besides, the municipal authorities have deferred the reopening of primary schools for students from the first to third grades, which was earlier scheduled for Monday. They have also suspended all sports events. And schools in Fengtai and Xicheng districts, where most of new infections have been reported, allowed on-campus classes for only graduating students.

But despite most of the people infected in the new outbreak being identified and municipal authorities taking all necessary measures to prevent and control the spread of the virus, there is a possibility that a few have not yet been identified or have already left Beijing. In fact, seven cases related to the Xinfadi market have been traced to Liaoning, Hebei and Sichuan provinces.

So the authorities cannot afford to lose time in finding all the possible links to the infection chain. There is an urgent need for Beijing and other city authorities to trace, quarantine and treat the infected people. They are expected to use big data available from the transportation departments and personal health status tracing apps which almost all smartphone users have installed to find the infected people.

And since the threat of a second wave of infections is high, decisive and resolute measures are needed to prevent that from becoming reality. With increased vigilance and swift action, however, we can hope the situation to ease in the near future.