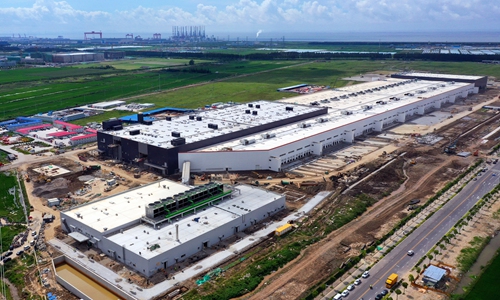 A good start in China doesn't mean Tesla's global expansion will be smooth sailing as the delayed construction of the US electric carmaker's Berlin Gigafactory proves the Shanghai Gigafactory story cannot be replicated anywhere.

On a new landing page for its Gigafactory Berlin, Tesla announced that the plant will hire up to 12,000 people and has a target capacity of 10,000 vehicles a week in Phase 1. The details came at a time when Tesla was ordered by a German court to halt deforestation for the new Gigafactory. Although Tesla promised to plant three times as many trees as it planned to cut down and promised to incorporate solar panels on the factory roof, local environmental activists have not been reassured.

Apparently, Tesla can hardly escape a length environmental review process, which, to a certain extent, is a disaster for a tech company that always needs to race against the clock to stay afloat in the global marketplace.

As Tesla is poised to build its first Gigafactory in Europe, in the hope of replicating its success with it Shanghai factory, delayed construction serves as a reminder that no country other than China could enable Tesla to move forward with its plant plan so efficiently. It took only one year for Tesla to build its Gigafactory 3 and deliver its locally produced Model 3, a clear sign of China's opening-up amid the trade war.

The success of the Shanghai Gigafactory cannot be easily replicated. It remains to be seen whether Tesla will be able to build another factory in Europe or Asia, and even if it does, it certainly would not be as fast as the one in China.

Either way, the importance of China to Tesla should not be undervalued in terms of production, sales and market valuation, meaning that the impact of outside factors like the ongoing coronavirus epidemic on the carmaker should by no means be underestimated, even though the company claimed that "the profit contribution from Model 3 Shanghai remains in the early stages."

Nevertheless, there is no need to be too pessimistic. The Shanghai Gigafactory already resumed work on February 10, and local government and relevant companies in its supply chain are on a fast track to return to normalcy. It is this kind of efficient work spirit that leads to the resilience of the Chinese economy, which is irreplaceable to the global economy even amid the coronavirus hit.