OPINIONS Denuclearization is ongoing, though the path is long and tough

Denuclearization is ongoing, though the path is long and tough 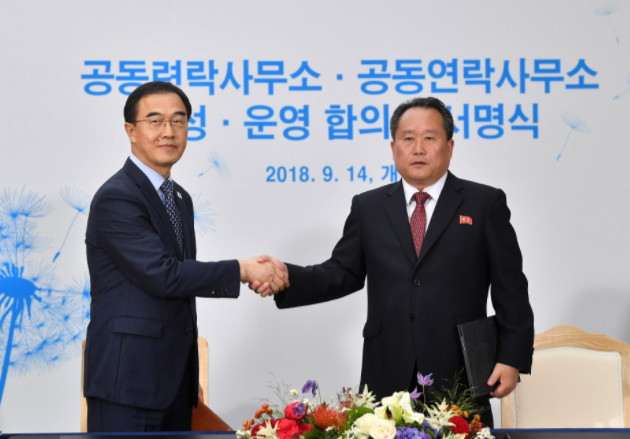 On September 14, the Republic of Korea (ROK) and the Democratic People's Republic of Korea (DPRK) officially launched their joint liaison office in the DPRK border village of Kaesong. For the purpose of improving cross-border exchange and communications, the launch of the office is seen as a crystallization of an agreement reached by the two sides at their historical Panmunjom summit in April.

Maeng Ju-seok, a political analyst from Seoul described the joint liaison office as the first channel which works around the clock between the two countries. According to Yonhap, ROK will assign approximately 20 officials there while the DPRK will deploy 15-20. The office offers a chance for the neighbors to communicate 24 hours a day and 365 days a year, said ROK's Unification Minister Cho Myoung-gyon at the opening ceremony.

Maeng also stressed the role the office could play in easing tension on the Korean Peninsula and contributing to the process of denuclearization.

The liaison office, which launched four days before the third Moon-Kim summit, was initially planned for opening in August, according to Yonhap. But the opening was delayed amid the stalemate in denuclearization talks between the US and DPRK. In August, US President Donald Trump prevented his Secretary of State Mike Pompeo from taking a planned trip to DPRK, citing insufficient progress with respect to the denuclearization of the Korean Peninsula.

Whether a new chapter in history is open or not still remains to be seen. But it is certain that the diplomatic deadlock between the US and DPRK has broken to some extent. According to Reuters, Trump received a "very warm, very positive” letter from DPRK leader Kim Jong Un, asking for a second meeting.

Teng Jianqun, director of the American Studies Department at the China Institute of International Studies in Beijing said that he was not optimistic about the deadline proposed by Kim.

According to Teng, numerous steps needs to be taken for denuclearization. He gave the example of the inspection of nuclear facilities, the dismantlement of the test site and of nuclear bombs that have already been mad

As a close neighbor and a strong supporter of the denuclearization of the Korean Peninsula, China plays a positive and constructive role on this issue. According to Teng, China has made a great effort to promote regional peace and stability. For example, China always adheres to solving issues through dialogue or negotiations. And the six-party talks which were initiated and promoted by China have provided an effective platform for dealing with the nuclear issues.

Despite all the obstacles and difficulties, Teng thinks the DPRK is sending out positive signals by dismantling its nuclear test site and its missile testing site.

"We are on the way to having a denuclearized DPRK, but we still have a long way to go to deal with this complicated issue," concluded Teng.