OPINIONS Despite rivalry, much unites China and US

Despite rivalry, much unites China and US 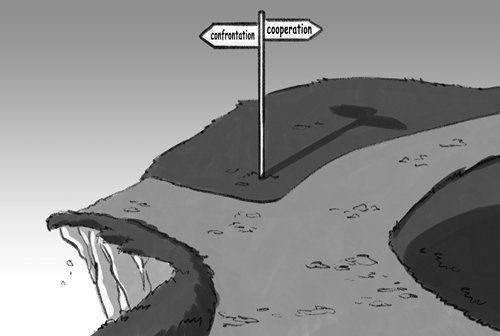 On my flight from Beijing to Los Angeles, I watched US Vice President Mike Pence's speech on China policy and felt a chill that reminded me of the Cold War. But when I walked out of the airport, a tender breeze alleviated that uneasy feeling. All seats on my flight were taken. Although my travel was close to the end of China's week-long National Day holiday, there were some tourist groups on the flight. A Chinese-American manager who works for a US company told me that he travels to China five to six times a year and it is quite normal to see a full flight. After I arrived at Los Angeles, I found that Trump-nominated controversial judge Brett Kavanaugh's swearing-in as Supreme Court Justice was the most attention-grabbing news on US social media and mainstream media. Kavanaugh's confirmation had come after a bitter struggle between the Democratic Party and GOP. The driver who picked me up from the airport showed immense interest in the topic, while knowing little about Pence's stinging speech on China. When asked about the trade war between China and his country, he just said, "I don't feel that."The Americans I talked to during my trip all thought that Washington's China policy was "inconsistent" and "fluctuating." They then narrated stories which showed that the economies of China and the US and even the lives of people from both countries were interdependent and inseparable.One day we drove to Lancaster where the BYD Motor Factory is located. After a crossing, a sign ahead of us read "BYD Boulevard." Driving along the street, we could see "BYD" in red on the grey wall with "Building Your Dream" written below it. While more and more Chinese companies hope to bring their dreams to the US, more and more American companies are fulfilling their dreams in China. I cannot help but think of the American manager I met on my flight, whose company and family are already closely associated with China.The dreams of the people of Lancaster are linked with the arrival of BYD, the world's biggest manufacturer of electric vehicles headquartered in China's Shenzhen. The plant, which started construction in Lancaster in 2013, has provided thousands of jobs in this small city of 160,000. R. Rex Parris, mayor of Lancaster, told me that he assumed the role during the 2008 financial crisis when unemployment was high and the economy was experiencing a steep decline. BYD was the first foreign investment he brought in. It has become a successful case of communication between two different cultures and helped draw in more investment. Local unemployment decreased to 4 percent from 24 percent.Cooperation was the word most used by Parris. Pointing to a laptop on his desk, he said, if China and the US compete for who should produce it, it will only be a zero-sum game; but if they cooperate, they can produce more products and explore wider markets.Rajit Gadh, director at the UCLA Smart Grid Energy Research Center, did not directly respond to my questions about the trade war, but eloquently said, trade frictions are temporary, but the direction in which electric vehicles are heading is for the long term.Gadh believes that the technological development of electric vehicles cannot happen without either China or the US, especially California. China is the largest market with the most advanced technology for battery manufacturing. California has a leading edge in this regard and half the number of electric vehicles in the whole of America are found in California.The short visit to the US makes me feel that the public in both countries did not expect that Washington's China policy would come to this, but they are unlikely to follow Washington's drumbeat. China-US relations are about bilateral interaction rather than a one-man show. Washington may be passionate about time-travel dramas, but today we all live in a world of coexistence. People on both sides of the Pacific are not interested in going back to the Cold War era.