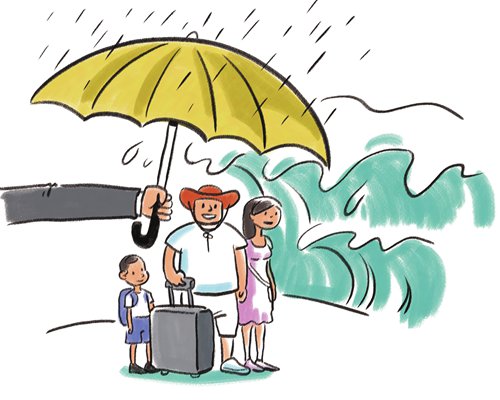 When I learned that the deadly tourist boat accident in Phuket, Thailand, had killed 47 people, I couldn't help but bring some harrowing images into my mind. The storm hitting, the boat listing, people thrown in water desperately trying to clutch on to something, anything … holding on to prevent their lives floating to another world anytime; their expressions a mix of desperation, fear, hope and hopelessness. As I went over these thoughts again and again, the imaginary faces of the victims started blurring with a subtle transformation. When they re-emerged, they all looked familiar - me.

In late May 2016, when I went to Phuket for a vacation, I almost had the same experience. Despite the rainy season with looming clouds and persistent rains, Phuket came across as a beautiful island with kind people and super-delicious food. The vacation went well until the last day when I decided to take a day trip to the Phi Phi Islands, a tourist magnet two hours by boat from Phuket, known for its clear waters and colorful fish.

A storm had been forecast and some tour agents turned me down because their boats had been withdrawn due to bad weather. But as it always happens in much of Asia, it didn't take me long to find one among the numerous tour agents peppering the streets of Phuket that would brave whatever lay ahead to make a fast buck.

Ours was a big boat with a capacity of 250 people. It looked strong and sturdy. The trip was indeed quite smooth on the way to our destination. Even the drizzle stopped every now and then to allow the sun to peek out from behind the clouds for a few seconds. But on the way back, the boat directly hit what seemed to be a dark gray iron curtain hanging between the sky and the ocean - the storm had been lying in wait.

The boat started to rock heavily. At some moments it felt like it had been tossed into the air by enormous waves. Initially, people were thrilled like children taking a roller coaster for the first time. We screamed with excitement every time the boat tilted and laughed when some of us were soaked by a wave. But soon the excitement turned into gloom. Everyone was ready to vomit their stomachs out. Children were crying and adults looked anxious. Some began praying, others grabbed a life jacket.

The drama lasted the rest of the trip with an even more dangerous twist toward the end. When we finally arrived onshore, a middle-aged Japanese tourist had a seizure and collapsed on the deck. It took what seemed to be an eternity before the CPR offered by crew members and passengers brought him back.

During the first few days after coming back to New York, I told the story to friends, bemused like a proud winner of Survivor. Then I woke up on June 8, less than two weeks after I had left Thailand, and was shocked by the news of a speedboat collision off Phuket. Two tourists were killed and 26 injured. Again, the boats were heading to the Phi Phi Islands. And again, it was stormy. Only then did I realize that in such a situation survival is not a question of guarantees but of luck.

Thailand is not the only place where tourists are allowed to risk safety for fun. In Mexico, I was allowed to dive in the deep ocean without a license. In a cave expedition in Belize, I followed an indifferent tour guide to swim in the treacherous waters inside a completely dark cave, and then climbed up steep cliffs without rails. The group of eight tourists was not even queried about their physical fitness when we signed for the tour.

Such things happen frequently in less developed countries but are rarely heard of in the US. Instead, tourists here are often upset by the overzealous safety regulations. I was declined at a bike rental shop on Martha's Vineyard because I didn't wear sneakers. And although I am a good swimmer I was whistled at by a lifeguard at a beach on Long Island for trying to swim in the thigh-high water on a day when they had put out a red flag to warn of strong winds and currents. Believe me, at those times, I really had the urge to shout back, "none of your business."

Regulations and fun are hard to balance - and the outcome rarely makes everyone happy. After the recent boat accident, Thai authorities said they would bring the Thai maritime safety standards to international levels, according to the Xinhua News Agency. But what really matters is this - deciding whether to go out in the ocean during a storm is not so much about regulations. It should be down to common sense.