Differences are not defining the China-US relations, and prejudices and miscalculations shall not impact the future of relations, Chinese Foreign Minister Wang Yi said during an exclusive interview with People’s Daily. 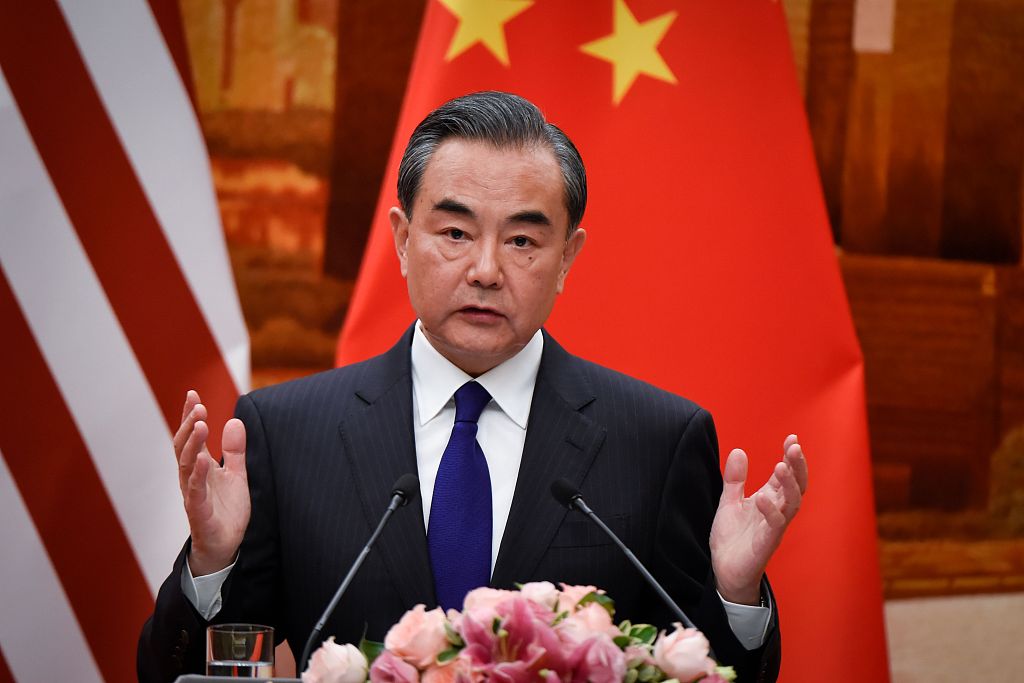 Chinese Foreign Minister Wang Yi speaks during a joint press conference with US Secretary of State Mike Pompeo (not pictured) at the Great Hall of the People in Beijing on June 14, 2018. (Photo: VCG)

The establishment of diplomatic relations between China and the US on Jan. 1, 1979 was a milestone for international relations, he noted. Not only did it usher in a new chapter of China-US ties, but also exerted profound influence on the evolution of the world order, he added.

Wang believes that the ongoing differences and sensitive issues between China and the US are very normal, as the two countries have different social systems, histories, cultures, and basic conditions. In addition, there are also respective interests and concerns.

The differences, disputes, and even conflicts between countries do not suggest inevitable confrontation, Wang said, adding that countries must respect each other’s sovereignty and territorial integrity.

He said differences and sensitive issues should be resolved through constructive ways. China and the US should seek common ground to keep bilateral relations on the right track.

Wang stressed that the Taiwan question is always the most important and sensitive problem in Sino-US relations. The one-China policy is a political foundation for China-US relations, and to properly handle this question is of vital significance for the sound development of China-US ties.

He requested the US side to stick to the one-China policy, adhere to the three China-US Joint Communiqués, oppose the forces for "Taiwan independence" and their separatist activities, and handle Taiwan-related issues with prudence.

On Tibet-related issues and Xinjiang-related issues, the US should also respect China’s sovereignty and territorial integrity, and stop interfering in other countries’ internal affairs.

Speaking of the uproar of the China-US trade friction, Wang noted that mutual benefit and win-win cooperation are the essence of economic and trade cooperation, and also bedrock and a booster for the development of China-US relations.

China and the US are willing to expand economic and trade cooperation, and have the capability and wisdom to reach a plan that is acceptable for both sides, Wang noted.

He said negotiations between both countries have achieved progress, once again proving that dialogue and consultations are the only solution. He suggested that the two parties meet each other half way and strive for an early agreement based on the important consensus reached between the two heads of state.

Wang believes that the sound and healthy development of China-US relations conforms to the interests of both countries and the trend of time. It is also an expectation of the international community. He said that China and the US should make the right choice of strategic mutual trust.

It is a serious strategic mistake that some Americans are wary of China, believing a strong country is bound to be hegemonic and China will definitely challenge or replace the US, Wang said.

He said that China will always follow the path of peaceful development and the mutually beneficial strategy of opening-up, and jointly build a community with a shared future for mankind with each country.

China has never adopted the so-called “The Hundred-Year Marathon [China's Secret Strategy to Replace America as the Global Superpower]”, and is not aimed at becoming another US and replacing the US, Wang said, adding that China-US relations are just like other international relations where positive and regulatory competitions exist.

Meanwhile, China and the US should carry out more cooperation based on equality and mutual benefit, aiming at the common interests of both countries and the world, the foreign minister noted.

Both sides should enhance rather than break interconnectivity and open doors rather than build barriers, Wang remarked. Both countries should establish a new philosophy of win-win results and abandon the old-fashioned mentality of zero-sum game, he said.